Villains & Vigilantes wasn’t the first superhero RPG – that’s generally believed to be Superhero 2044. It was, however, the first superhero RPG to get much in the way of actual traction after its release in 1979. Written by Jeff Dee and Jack Herman, it was originally put out by Fantasy Games Unlimited, who worked on a solicitation-based business model for RPGs – people who’d written their own homebrew games (or released them as small press efforts) would come to FGU head honcho Scott Bizar with their games, and he’d produce them and unleash them on the market with a much higher profile than they’d have had on their own. 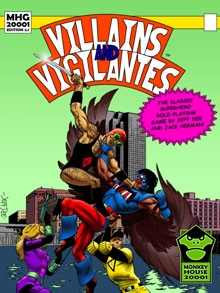 An upshot of this model is that in its heyday the FGU portfolio was intriguingly diverse. As well as the occasional attempt to jump on the D&D bandwagon like Chivalry & Sorcery or Swordbearer, you had genuine departures like Bunnies & Burrows and historically-inspired games like Flashing Blades, Bushido and Privateers & Gentlemen. In that context, Villains & Vigilantes, as an experimental foray into a genre that RPGs hadn’t widely explored yet, makes sense as part of that throw-everything-at-the-market-and-see-what-sticks approach; the fact that it was one of the few FGU product lines to get an active flow of support and a second edition suggests that it was one of their bigger successes at the time.

In its heyday, it was definitely one of the major superhero RPGs on the scene – when Chaosium did conversion stats between Superworld and other RPGs, the two games they did them for were Champions and Villains & Vigilantes. However, over time the stars of all three games have faded. This may partly be due to the rise of new superhero systems such as Mutants & Masterminds combined with the fact that none of them, with the arguable exception of Champions with the Dark Champions supplement, seemed to adapt to the broadening of the superhero genre into edgier territory post-Watchmen. However, each game line also had its own distinct challenges.

In the case of Villains & Vigilantes, the big problem was the overall decline of Fantasy Games Unlimited in general; after its late 1970s and early 1980s heyday, the often cheap and cheerful approach of Fantasy Games Unlimited started to seem increasingly dated, and by 1991 its fortunes had declined to the point where its corporate identity was dissolved and Scott Bizar resorted to keeping the flame alive barely as a sole proprietorship situation. Across the board, Fantasy Games Unlimited products disappeared from shop shelves to a large extent, though more recently they have made a return via DriveThruRPG.

This set the scene for the intellectual property dispute between Dee and Herman on the one hand, now producing material as Monkey House Games, and Bizar/FGU on the other. Dee and Herman wanted to take back control of Villains & Vigilantes and believed they had the right to based on their contract with FGU, since that was with the New York corporate entity and not with Bizar personally and had a clause saying that in the event that FGU ceased to be the rights would revert to them. Bizar, naturally, disputed this.

The legal dispute has gone back and forth since 2010, but in 2016 they reached a settlement (usually the more sensible option than fighting out to the bitter end in court), and whilst naturally the fine details of the settlement are private between the parties it seems like a reasonably fair deal. Although FGU remain the owners of the trademark, Bizar has given Monkey House a licence to use it, and most importantly has conceded to them the copyright in the various editions of the core rulebooks as well as two adventure supplements written by Herman and Dee. (There’s another Herman-written supplement, DNAgents, that isn’t included in the deal, but I suspect that was written on a different contractural basis to the other products.) FGU retains the rights to the products they released written by other hands, and might be able to keep putting out their own supplements, but Dee and Herman are in the helm as far as core rulebooks go.

They’ve successfully capitalised on this by producing a new edition of the game; Villains & Vigilantes 3.0: Mighty Protectors is a major expansion on the game (including a point-based character generation system which seems reminiscent of a greatly simplified take on Champions, based on a perusal of the DriveThruRPG preview), with the Mighty Protectors tagline referring to the fictional universe that Dee and Herman want to associate with the game (perhaps having come to the conclusion that today’s RPG market demands distinctive settings). My copy of the game, though, is the “2.1” version that Monkey House put out of the 2nd edition rules from 1982, with typos corrected. As well as being the version of the game which got the most traction and had the most prominence over the years, the 2nd edition is famous for prominently featuring what might be Villains & Vigilantes‘ most daring innovations in RPG design.

That, my friends, is the most absurdly dangerous character creation system ever proposed for an RPG.

You see, the assumed mode of 2nd edition Villains & Vigilantes is that you are going to be playing yourself as a superhero. There is a system for randomly rolling up characters – it’s tucked away later in the book and is recommended for use with NPCs, or if a player’s character dies. Playing yourself is explicitly presented as the assumed default.

So far, so good, right? The problem is that your various stats (essentially the standard D&D stats with Intelligence and Wisdom mashed together, Constitution renamed as Endurance and Dexterity renamed as Agility), with scores from 3-18, are assigned by the GM. This is such an absurd recipe for in-group conflict that it’s absolutely ridiculous, especially since unless you are in a 1-on-1 game then the GM is not only making a vaguely objective statement about a player’s personal qualities, but also directly comparing the players with each other. Even if the task of assigning scores is delegated out, and even if nobody takes absolute offence at another person at the table declaring themselves to be smarter or more charismatic than them, it’s still the sort of thing you need to have a really good level of trust within a group to pull off.

Meanwhile, total body hits are based on body weight, so you’re going to need some scales at the game to complete character generation. And that’s its own level of awkwardness right then. Also, although women have no overt restrictions in the game, the random character generation system gives characters a 2 in 3 chance of being a man and only a 1 in 3 chance of being a woman, which seems absolutely, wildly pointless.

As far as the system goes, you have a randomly-determined brace of powers and a general injunction to the GM to let someone’s powers be more powerful if they rolled unluckily and don’t have as many powers as their peers, and a combat system largely based on which power you are using against which defence method. It’s all rather loosey-goosey in a way which both Champions and Superworld nail down much better with their respective point-buy systems, which is presumably the motivation behind adding a point-buy system and having superpowers have increasing effect the more points you put into them in the 3rd edition.

That said, there’s something weirdly nice about the weirdness of 2nd edition Villains & Vigilantes – not so much despite the random powers, large amount of GM fiat, and play-yourself conceit so much as because of them. It feels like a game which would work really well for spontaneous pick-up-and-play fun which doesn’t need to be especially well-balanced, between friends who know each other well enough and have enough sense of self-deprecation to not get huffy about the character generation process. Precisely because of these features – all of them apparently radically dialled back in the new edition – it’s like nothing else in superhero RPGs, and that distinctiveness is precious and I think it’s a mistake to lose it.

3 thoughts on “Most Dangerous Character Generation System Ever”