As I related in my review of Lords of Creation and Powers & Perils, Avalon Hill and SPI – the two big beasts in the US market when it came to wargames in the 1970s – were caught napping when it came to tabletop RPGs. Avalon Hill were left with egg on their face when they turned down D&D, prompting Gary Gygax to set up TSR; rather than being in a position to be the dominant force in an entire market which overlapped with the wargaming fandom enough to draw money from its fans but also could reach a wider audience, Avalon Hill had conceded the nascent RPG industry to TSR and other publishers who jumped onto their bandwagon.

I covered Avalon Hill’s mid-1980s bid to finally break into the RPG market in that review, which resulted in what you could charitably call “mixed success”. To summarise, Lords of Creation and Powers & Perils were poor efforts whose failure in the market was largely a justifiable reflection of their poor design – overly sloppy in the former case, overly fussy in the latter. Their subsidiary. Victory Games, produced James Bond 007, lately cloned as Classified, which was ahead of its time in some ways and, during the window of time when it was on sale before Avalon Hill gave up the licence, beat out TSR’s Top Secret and Flying Buffalo’s Mercenaries, Spies & Private Eyes to become the top espionage RPG on the market. Third edition RuneQuest, though still largely the work of Chaosium, was produced and distributed by Avalon Hill, and despite some issues with both the design itself and Avalon Hill’s management of the game line was still a significant success, selling more in its first four months than Lords of Creation and Powers & Perils sold in their first year combined.

This followed SPI’s own bid to break into the RPG market, which they launched in 1980 and was also a mixed success – and arguably a more intense one at that, with lower troughs and higher peaks. (This is especially the case if you count RuneQuest as a Chaosium game which Avalon Hill happened to have a distribution deal for rather than a “true” Avalon Hill game in the sense of being developed in-house by them or a subsidiary.)

As far as the troughs go, the Dallas RPG lives on in infamy as a major laughing stock of the industry. In more recent years, the existence of games like Fiasco makes me think that the idea of a soap opera-themed RPG or storygame could have some legs – but at the same time, I think such an endeavour calls for game mechanical ideas and approaches which simply hadn’t been developed in 1980. As it stood, the market at the time was not ready for such a product, and the field of game design didn’t offer the tools needed to make it work. 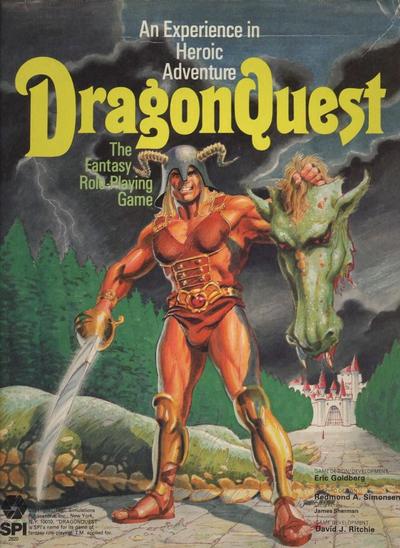 But that trough had its corresponding peak in the form of the mighty DragonQuest. (No relation to the adorable Akira Toriyama-illustrated console JRPG series of the same name – in fact, the reason the first few games in that series came out in the west as Dragon Warrior was to avoid a trademark clash.) Though Dallas bombed, DragonQuest was a hit, selling out completely at the 1980 Origins convention, and in the months that followed gathered significant critical acclaim and commercial success. Origins 1981 was another triumphant moment for DragonQuest, when it took away the award for the best roleplaying rules for 1980. Judges’ Guild did some third party products for it, which of course would have been a pointless endeavour had the game not gained a sufficient following to make it worth Judges’ Guild spending their time on it.