Nostalgic boardgamers of a certain age have been cheered by Hasbro announcing the return of HeroQuest through their Avalon Hill subsidiary (and gnashing their teeth with annoyance at only US and Canada release plans being in the offing so far). As has been announced by Chaosium, this coincides with them striking a deal with Hasbro, permitting purchase of the trademark, which will result in the HeroQuest RPG – which has nothing to do with the boardgame – being renamed QuestWorlds, which has previously been established as the name of their HeroQuest fan publication licence. 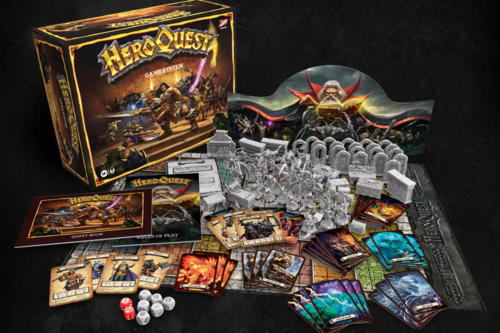 The history behind this is a bit of a tangled one. As far back as 2nd edition RuneQuest, Chaosium had been pushing the idea that they’d bring out a product called HeroQuest which would deal with high-powered Gloranthan characters engaged in the process of “heroquesting” – an in-setting concept in which Gloranthan characters take on the roles of mythic figures in order to enact significant changes in the world. (Unless Chaosium have been extremely short-sighted in the way the transfer has been negotiated, they probably have some reassurances that using the term “heroquest” as an in-setting term for this in Glorantha-related products is still legit.)

However, the product never saw the line of day, and eventually the HeroQuest name was used (and the trademark registered) by Hasbro for the boardgame. Hasbro didn’t keep up the trademark renewals when the game went out of print, however, so Moon Design were able to register the trademark and use it for new editions of the RPG formerly known as Hero Wars.

Evidently, Hasbro’s desire to rerelease the game was strong enough to bring them to the negotiating table, leading us to the deal announced this week – Moon Design having since become the leadership of Chaosium, having been set up in that role by Greg Stafford after he and Sandy Petersen took control back from the Charlie Krank-helmed regime (as I chronicled during my account of the Call of Cthulhu 7th Edition Kickstarter and its associated drama).

As with many intellectual property transfers, there’s probably a bunch of clauses which aren’t being publicly aired and it’s not as simple as Hasbro giving Chaosium/Moon Design money and Moon Design handing over the trademark. There’s currently a sale on at Chaosium’s website of existing books using the HeroQuest brand name, which will all be repackaged as QuestWorlds books on their next printing, much as happened to RuneQuest 6 when it became Mythras.

My hunch is that Moon Design probably don’t have that much in the way of stock to clear in the first place. Remember, one of the first things they did when they took control of Chaosium was to do a fire sale at the warehouse, selling off a bunch of stock which the old regime had been paying to store more or less completely pointlessly. (It is ludicrous that they had significant stock of the entire English language Nephilim product line some two decades after it crashed and burned, for instance.) That and the subsequent closure of the warehouse suggests to me that Moon Design understand how modern publishing trends in the RPG industry point away from warehousing large amounts of stock and more towards running smaller print runs and keeping lower amounts of material in stock.

In addition, it may well be that the deal reached with Hasbro also included some form of deal when it came to unsold stock – clearly, it includes at the very least a window of time to allow for the sale of the remaining materials, it’s not impossible that it also includes some form of payment to cover the losses involved in pulping anything which can’t be sold. That doesn’t mean it’s not preferable to sell those products at a profit, but either way I don’t think Moon Design are going to be too troubled by pulping the remaining copies using the HeroQuest trade dress.

Using QuestWorlds for the game line is also a canny move as well. The fact is that HeroQuest is a term with specific Gloranthan connotations, but a system which had become genericised (with a Glorantha-specific version available), and the QuestWorlds branding is already used for community content. Questworld was an old RuneQuest 2nd edition boxed set which described an “open” campaign world for the game, which was intended to act as a setting subject to less canon oversight than Glorantha, but in subsequent years both the system-neutral editions of RuneQuest and the fantasy implementations of Basic Roleplaying have rather displaced that when it comes to fantasy, and the BRP licensing setup and SRD already provide a basis for people making new non-Gloranthan fantasy material inspired by the system. (Fan-made Gloranthan material also has a home in the form of the Jonstown Compendium storefront.)

Chaosium/Moon Design have already, for quite some time, bedded in QuestWorlds as a generic synonym for the HeroQuest system, complete with licence and SRD, which is both an apt use of the term and an indication of how long negotiations have probably been progressing on this.

In short, though it is hard to judge without sight of the actual deal struck between Hasbro and Moon Design, in general it sounds like sensible minds have prevailed to achieve a solution beneficial to everyone. Hasbro gets to bring back HeroQuest (the board game); Chaosium/Moon Design do have the inconvenience of renaming the HeroQuest RPG, but since it debuted as Hero Wars anyway it’s not like the game line hasn’t been subject to this confusion anyway, and the HeroQuest name has always given rise to some confusion with the boardgame anyway so perhaps it is for the best in the long run – most importantly, nobody is losing any stuff, it’s just that the stuff currently put out will need to be renamed. Hasbro have given Chaosium/Moon Design some form of payout which made Moon Design decide it was worth the inconvenience of the rebrand – an injection of money which will surely help them advance other projects and endeavours going forwards, and so will have a positive knock-on effect not just on QuestWorlds but all of Chaosium’s product lines. There’s no losers here, which is what makes this a good deal all told.