Poking about further at classic-era Rolemaster, I’ve begun to suspect that the system’s reputation for being overcomplex hails less from its core rules – which, whilst crunchy, are perfectly manageable – and more from the extent to which they were expanded by subsequent releases in the line. With supplement after supplement churned out, the mass of material available for the line became unmanageable, and when the revision into the Rolemaster Standard System was made ICE made the error of pandering too much to the hardcore fanbase who were absolutely fine with all of these additions and who relished all the crunch, resulting in an edition which dialled them up entirely too far.

This is an evolution we’ve seen time and time again in gaming – it happened to 3rd Edition Dungeons & Dragons too – though at least ICE have the excuse that they were operating early enough that these pitfalls weren’t so well-known and widely exemplified. (The custodians of 3.X D&D had less excuse, given the influence that Rolemaster had on that game.) Still, that doesn’t mean that no expansions to Rolemaster are welcome – here’s a quick look at some additions I’ve found quite interesting. 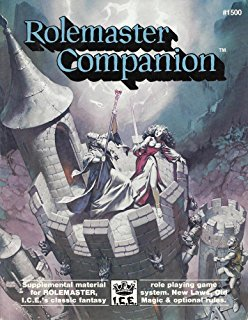 Emerging in 1986, the Rolemaster Companion was successful enough to become the start of an annual tradition, broken only in 1989 for the release of the revised core box, which eventually led to seven of these dang things being released, along with additional subject-specific Companions like the Alchemy Companion and so on.

The original Companion was written by Mark Colburn, who based on the introduction seems to have been a Rolemaster fan who lucked out and was asked by ICE to do a whole book of his homebrew additions. In fact, so far as I can make out each of the companions had its own author approaching it in this general manner, so you could take one particular Companion and implement all of it to arrive at that particular author’s vision of where you could take Rolemaster or you could selectively dip in and out of them to add bits to your game if you decided they were an especially good fit.

Somewhere along the line, though, that attitude seems to have been lost. Rolemaster Companion IV included an index of all the spells in Spell Law and the Companions up to that point, which suggests a creeping tendency to treat them as, if not mandatory features of every campaign, at least something serious Rolemaster groups should be considering. I’ve said before that I don’t actually think baseline core Rolemaster as of the 2nd edition was that complex, and the consensus seems to be that the Standard System dialled up the complexity massively, but the Companions seem to have been where Rolemaster found its tipping point.

Still, the first Companion is pretty useful – there’s a condensed combat system for resolving fights quickly, new classes that cover a bunch of niches, higher-level spells for those that want superpowers and a new branch of magic, the Arcane variety, which blends the three existing brands of Rolemaster magic in order to allow various metamagic-type acts like spells which allow you to set up contingency-activation spells and the like. (It’s especially useful if you want to use the Shadow World setting, since its basic core set seems to assume that Arcane magic is in play.) Additional monsters and pointers on working out the population details of your campaign setting round things out. 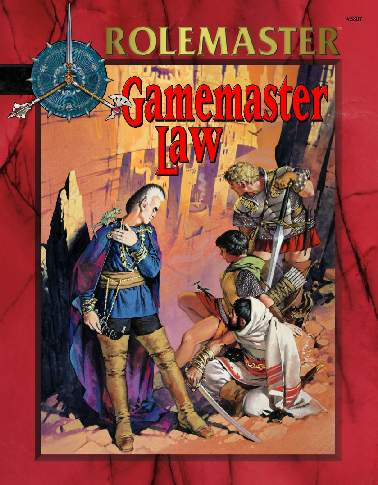 This seems to have been partially intended as the equivalent to Campaign Law for Rolemaster Standard System – the second section of the book largely reproduced the same rules and advice for campaign world management as appeared there, with various additions to those rules from sources like the Companions integrated in to make them meatier. Since the major rules changes in the Standard System weren’t really focused on these subjects, some may find the expanded climate and geography guidelines and cultural parameters and so on useful in other editions of Rolemaster and in other games.

However, preceding that and taking up the first half of the book is an extended discussion of the philosophy of GMing, much like Nightmares of Mine was mostly a system-free discussion of the philosophy of horror gaming. Some of the ideas in there get pretty esoteric and involve ideas in RPG theory that don’t seem to have had much discussion since, but do seem worth further exploration. For instance, there’s the idea that any RPG campaign has a visible scope – the extent of the gameworld and what’s going on in there and how it works that the players are aware of – and an actual scope which extends beyond that and consists of information hidden to them, and that players should not be allowed to reach the edge of the actual scope and should at most get glimpses of it in revelatory moments. It all sounds a bit gnostic and I am not sure I believe in it all, but like the best philosophy texts it sets out its ideas clearly and prompts you to engage with it to examine not just whether you agree or disagree, but why you accept or don’t accept those ideas in the first place.

I suspect this discussion would simply overwhelm beginner referees, who generally just need sound practical advice and encouragement and reassurance that refereeing isn’t as hard as it looks, but for experienced referees who already have developed ideas about best practice and the philosophy of refereeing it’s worth a glance.

It also has an insanity table where I think the designers intended to imply that homosexuality is a moderately serious mental illness, but they mess up – on the table for psychiatric ailments, which is the one less serious​ than the absolute worst table but heavier than the less severe table, one of the results is “cross-gender attraction”… which means that heterosexuality is a mental illness and same-gender attraction is the norm. Boo to ICE for putting that in, but hooray for the inadvertent radicalism. 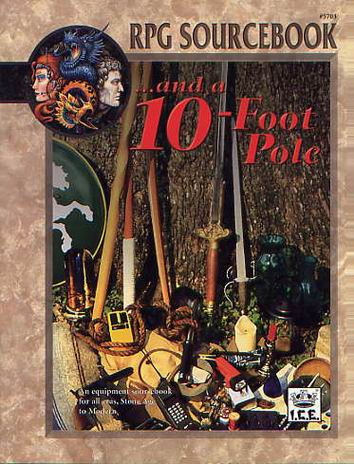 This is essentially the equipment list to end all equipment lists – a price list covering historical eras from the stone age to the modern day. It’s not absolutely comprehensive, because it’d need to be phone book sized to even approach that, but it drills down to an impressive level of detail, and is nicely generic enough to be used with just about any game if you need to know, say, what a roughly plausible-sounding price for some unusually specific trinket in a particular time period is. You could probably Google much of the modern day stuff, but it’s nice to have the research burden lifted for historical periods. As with Nightmares of Mine, it’s nicely system-neutral for the most part too.