Encounter Critical hails from 2004, but it’s wearing retro-1970s fashions. Penned by S. John Ross but presented as a 1979 pamphlet produced by a local gaming club high in enthusiasm but short on talent, it’s specifically a parody of the design tastes of that era. With crude art, ambiguous and confusing rules explanations, and an incredibly rudimentary layout, it saves itself from the trash by the sheer unfettered imagination on display. In keeping with the more “gonzo” D&D imitators of its time, the game sees nothing wrong with mashing up science fiction and fantasy elements (including “Vulkans” and “Wookys”). 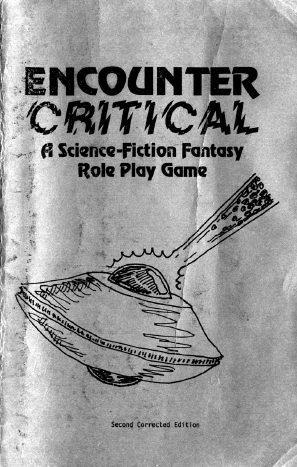 In keeping with its origins, the brief booklet also includes a certain amount of sexist sniggering (such as anything to do with Amazons), and whilst you could frame this as calling out the sexism of the era it feels more like indulging in it. There’s also a “doxy” class where you’re a prostitute and to level up you have to service an important client, though it does admit the existence of male prostitutes and same-sex seduction, which is more than many games of the era did.

Still, as far as regressive jokes go that’s more or less the limit, and beyond that the game is a celebration of gonzo nonsense which, interestingly, predated the major thrust of the OSR and the era when people would make a major effort to cash in on that freewheeling style.