A while back on here I did a quick review of the core book and major supplements for a/state. OK, apparently strictly speaking it’s a|state, but a/state fits the style of presentation on here better – it aesthetically bugs me that the horizontal line in a|state doesn’t slant when typed in italics, and I’m damned if I’m giving up my use-italics-for-game-titles convention this deep into this blog. Either way, the title translates to “we want to make it harder to Google about our product”.

Anyway, however you type it a/state was an example of the well-worn “nice setting, shame about the product line” phenomenon. You know the sort of thing – a game where the unusual setting is the main draw, but ends up being insufficiently niche in its appeal to support the sort of follow-up which its publishers were clearly envisaging. Empire of the Petal Throne pioneered this sort of thing in the 1970s, Skyrealms of Jorune did it in the 1980s, Tales of Gargentihr was an example from the 1990s, a/state did it in the 2000s; I am sure you can imagine other examples.

It’s often the case, with this sort of game, that the people behind it were clearly planning to put out way more material but the game’s success simply wasn’t of a level to make it viable. Empire of the Petal Throne and various subsequent Tekumel games had products coming out in fits and starts, but never a sustained period of consistent releases. (Thanks to M.A.R. Barker having been exposed as a closet fascist who wrote a neo-Nazi novel for National Vanguard under a pseudonym and was closely involved with a leading Holocaust denial journal, it is deeply unlikely it’ll ever revive.) Jorune got a trickle of supplements and the occasional new edition, and even managed to get a videogame adaptation (Alien Logic), but on a commercial level is now pretty dead – there’s an online fandom still, but it doesn’t seem to be a large or especially active one. Gargentihr managed to get its core book out, and apparently there was an adventure distributed in PDF format on floppy disk at some cons, but then vanished into the ether.

END_OF_DOCUMENT_TOKEN_TO_BE_REPLACED

The idea of a “thieves’ guild” or other such structure has long been a hallmark of the sort of fantasy that D&D drew on – ever since Fritz Leiber first treated the world to the Fafhrd and the Gray Mouser stories, organised criminal gangs have been part of fantasyland. Since then the larcenous life has enjoyed a range of depictions in a fantasy context, with Scott Lynch’s stories of Locke Lamora perhaps being the most successful recent riff on the idea.

That being the case, it’s rather interesting how RPG systems specifically designed to support heist-style gameplay have been surprisingly thin on the ground. The overall direction of evolution of the D&D thief – from exploration-focused obstacle-bypasser to something more combat-oriented as the editions have gone by – feels in part like a consequence of this; in the absence of game mechanics for specifically thief-like activities, and with only the thief character having access to those mechanics which do cater to them, heists in D&D are not so widely featured. 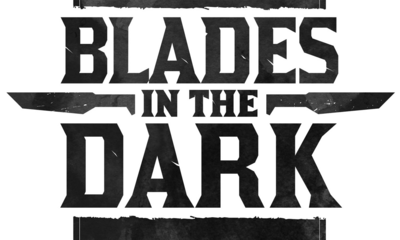 Blades In the Dark is a game system which promised to reverse that trend, being an engine focused specifically on the execution of daring burglaries and other such escapades. It also provides one of the more interesting subjects for a Kickstopper article, for reasons I will get into later…