Violence: the Roleplaying Game of Egregious Bloodshed is satire, and transparently. unsubtly so. In some respects it was quite forward-thinking: the utter pay-to-win scam of its experience point system, for instance, recalls some of the ways in which free-to-play MMORPGs would find to monetise themselves decades later. (Violence was published in 1999.) In other respects, it’s a grumpy, mean-spirited attack on a style of gaming which was actually on the back foot when it came out in the first place: to be specific, it’s bashing a particular approach to playing Dungeons & Dragons which wasn’t even in vogue among Dungeons & Dragons players and designers at the time. 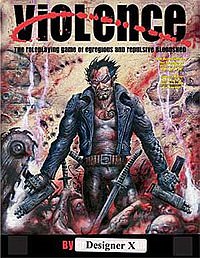 Penned by Greg Costikyan under the pseudonym Designer X, Violence was put out in Hogshead Publishing’s New Style line of arthouse indie-style games. This was the same line which included John Tynes’ Power Kill, which also took an obnoxiously simplistic slam at an obnoxiously simplistic parody of what D&D players actually wanted. During James Wallis’ time at the helm of Hogshead he was constantly claiming to be working on FRUP, a parody RPG based around a world where the three core AD&D rulebooks had fallen from the sky and had been adopted as holy writ.

Between all this, you can be forgiven for wondering whether Hogshead had some sort of ragingly hot hate-boner for AD&D. If it did, it wouldn’t exactly be a boner without an ulterior motive, seeing how Hogshead’s flagship product was WFRP, a competitor for the same fantasy RPG market as Dungeons & Dragons. However, the thing about Power Kill, Violence, and what little we know of FRUP is that they were largely taking aim at a style of D&D play which wasn’t even in-vogue at the time – the mindless hack-and-slash crawl through a dungeon, killing everything you encounter and taking its treasure.

It is a style which has, perhaps, historically been over-represented when it comes to convention and game store play, simply because it’s far more suited to the particular issues in those environments (like lacking a consistent, week on week player group and the necessity of getting a sufficient chunk of gaming in within a set time slot), but it would be a profound mistake to assume that public play is representative of play as a whole. (In general, I find that game store, club and convention play is the thing you do when you have no better alternative.)

It is also a style which, though it’s been parodied and mocked more or less as long as Dungeons & Dragons has been a thing, extremely few people seem to actually espouse or play for a long period of time – some people go through it as a phase, but many never do. It certainly isn’t representative of how Dungeons & Dragons was actually played in its earliest days, as testimony from gamers of the era and the reconstruction work by the OSR has widely established. Even the OSR doesn’t advocate the hack-and-slash approach very much – out of the diversity of game styles the OSR has offered up, the most authentically “old school” seems to be based around keeping your wits about you and making the strategic decision to avoid combat and regard it as a failure state unless you are able to establish a decisive advantage. Play your average Lamentations of the Flame Princess module in a full on hack-and-slash style, for instance, and your character will likely come to an incredibly bad end.

Most of all, it’s a style of gaming which Dungeons & Dragons itself hadn’t actually been endorsing or promoting for literally over a decade by the point that Violence came out, with the mid-1980s unveiling of Dragonlance arguably being the stage when D&D went all-out for a “fantasy heroes on an epic quest” model for the assumed basis of campaign play rather than “fantasy mercenaries out for personal enrichment”. As far as criticism of 1999-vintage D&D goes, Violence is pretty weaksauce, given the diversity of settings (and associated assumed play styles) TSR was intent on offering.

The fact is that the hack-and-slash masters were already leaving the hobby in droves during the 1990s, were briefly retained by certain styles of play around 3rd edition D&D in the 2000s, but by now are largely a solved problem. The increasing effectiveness of videogames at providing a hacky-slashy wonderland of guilt-free killing and looting (with a social aspect if you dip your toe into MMOs) is largely responsible.

Ultimately, these days if you want a hack-and-slash game, a tabletop RPG is a decidedly suboptimal solution when you could be playing a videogame (or one of many dungeoneering-themed boardgames) instead, and that’s been the case since, oh, several years before Violence came out anyway. A computer can handle larger battles with far more consistent application of rules than a human referee can, after all. Whilst there may be some gamers who go through hack-and-slash phases, and a few benighted souls who, shunned by other groups, gravitate into clusters of their own where they do the kill-and-loot cycle all day long at the tabletop, the fact is that characterising them as the majority, or even a considerable minority, of the tabletop RPG hobby these days is not really accurate, and it was already ceasing to be the case when Violence came out.

The people who are still playing RPGs are to a large extent doing so because they want something more than mere hack and slash – and given that many new entrants to the RPG hobby these days are coming to it via Actual Play podcasts and livestreams and the like in the Critical Role mode, the new generation of gamers have been drawn into the hobby based on a range of good examples of non-hack-and-slash play. From the perspective of today, Violence resembles an angry rant at what is basically a solved problem; back in 1999, it was an angry rant aimed at people whose primary sin is that their sense of fun was not that compatible with Costikyan’s or Wallis’s.

This is making the exact same point that Power Kill was making, except far longer and much less cleverly. Specifically, the point is that if you change the entire context of a player character’s actions – culturally, historically, in terms of their personal background and in terms of the adversaries they face and the nature thereof – then suddenly they seem monstrous. Well, no shit. To be honest, the PCs in zero-plot zero-motivation hack-fests are pretty obviously mercenary shitbags even without this analysis. Violence ultimately doesn’t offer anything that Power Kill didn’t as far as commentary goes, and whilst in principle there’s a game you could attempt to play here, the screed is so obviously intended as a thought experiment (and the game design is so deliberately shitty for parody purposes) that actually playing the damn thing is nigh-unthinkable and wouldn’t really illuminate any points that just reading Violence wouldn’t avoid.

To give Power Kill slightly more slack than I usually do, I will give it this: its structure at least admits the possibility that even when you change up the context, the player characters were behaving in as moral and as upstanding and as helpful and as constructive a way as they could be reasonably have expected to, considering their beliefs about the situation placed in front of them. It doesn’t begin from the assumption that you are a shitty person who plays or runs shitty games.

Violence, on the other hand, goes out of its way to insult a class of RPG gamer who, as I argue above, had already become largely irrelevant to the hobby and who has become increasingly irrelevant since, and who odds are would never bother to read Violence in the first place anyway. The people who, in 1999’s RPG market, were most likely to read Violence were people who already considered themselves above the people who play that sort of hack-fest, and who would derive a nauseating sense of self-satisfaction from reading it and imagining how superior they were to such players, like a microcosm of nerd culture’s general tendency towards declaring itself superior to all those jocks and other high school cliques.

The fact is that screaming your head off about how something is badwrongfun is never a good look, and that is what Violence boils down to: the grumpy rant of a game designer who, whilst talented, seems bitter that they never got to get a big fat iD Software paycheque peddling ultraviolence to videogamers like Sandy Petersen did.