As I’ve mentioned in previous reviews of their products, Fantasy Games Unlimited had a novel but rather effective business model: Scott Bizar, their head honcho, would solicit freelance authors to submit their games to him, and if they made the cut a deal would be struck for FGU to produce and distribute the games in question. This allowed FGU to put out a lot of product on a “throw everything out there and see what sticks” basis – game lines which became a hit could have supplements published for them, whilst those which didn’t gain traction could be abandoned – and also meant that FGU’s roster was impressively diverse, with games ranging from classic fantasy subject matter (like Swordbearer and early editions of Chivalry & Sorcery) to riskier experiments. Bunnies & Burrows was perhaps the greatest oddity of their back catalogue, but Bushido represented a bit of a departure as far as subject matter was concerned when it first came out and whilst Villains & Vigilantes was not the first superhero RPG, it was arguably the first one to really gain traction. 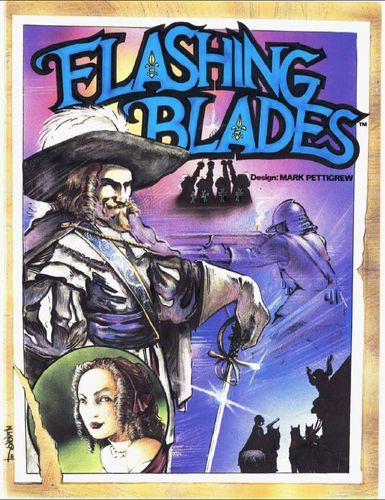 That deep roster has proven a boon for Bizar in the PDF age – whilst it would be obviously uneconomical to keep all of FGU’s different products in print at the same time, thanks to PDF distribution and print-on-demand Bizar doesn’t need to, so thankfully a large proportion of FGU’s releases have become available again through legitimate avenues. (A happy side effect of the Villains & Vigilantes ownership dispute is that Bizar went out of his way to get the extensive back catalogue on the game up on DriveThru – presumably to add weight to his claim – and the terms of the settlement between Bizar and the game’s designers is that he gets to keep almost all that supplemental material available.) Through this means we have available once again Mark Pettigrew’s delightful historical RPG Flashing Blades.