END_OF_DOCUMENT_TOKEN_TO_BE_REPLACED

Yep, turns out that all that glasnost business was the sham that the John Birchers thought it was. After a “gutless” President signs misguided weapon control treaties with the Soviet Union – treaties the USSR’s tyrannical regime sees nothing wrong in breaching themselves – the Soviets are able to perfect a nigh-perfect missile defence system for the motherland whilst gaining an overwhelming strategic advantage against the USA. The President capitulates to USSR demands, and soon enough Soviet forces begin landing in the US (along with their Cuban and Nicaraguan buddies) to act as a peacekeeping force in support of a puppet government. 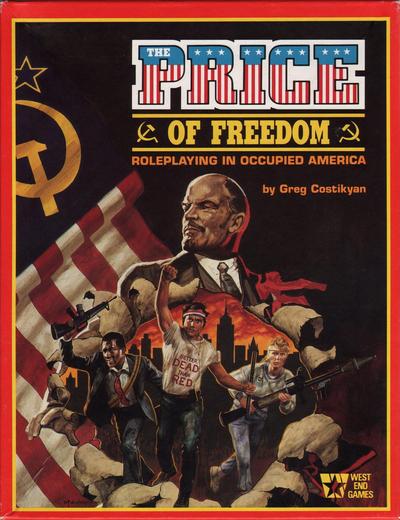 The PCs in The Price of Freedom are, much like the Wolverines in Red Dawn, an unlikely rabble of freedom fighters – ordinary Americans having to face up to extraordinary times, fighting against a regime near-indistinguishable from the Stalinist version of the Soviet Union. On the face of it, this is undeniably a fantasy scenario derived in a large part from the fears of the extreme right of the 1980s; the very concept that the Soviets would mount an invasion of the USA, and attempt to occupy it in the long term, was considered absurd by most even at the time. (After the Cold War ended, declassified Soviet-era documents revealed that not even the Soviets thought that an invasion of the US was a good idea – primarily because of there being way too many guns floating around.)

On the other hand, the game was released by West End Games – known in RPG circles at the time mainly for Paranoia and Ghostbusters – and designed by Greg Costikyan, known both for his work on those games and on Toon. All comedic games – with Paranoia, in particular, incorporating a fat dose of Cold War satire. Was the game supposed to be taken seriously, or was it a really dry satire? Opinion at the time was sharply divided, with some convinced that the game couldn’t possibly be intended to be taken seriously, whilst others believing that West End had gone full Reaganite on its audience.