Before TSR’s rise to prominence and the emergence of the tabletop RPG hobby as a significant new factor in the hobby games market, SPI and Avalon Hill were words to conjure by as the market leaders in the world of tabletop wargames, particularly hex-and-chit stuff. To draw an analogy with tabletop RPGs, imagine American wargames of the 1970s were D&D/Pathfinder, and then SPI and Avalon Hill would be like the Paizo and Wizards of the Coast of that market – both selling products with broad similarities, but with enough of a distinction in their house styles to make room for both in the market (it’s my understanding that SPI’s material tended to be a notch more complex than Avalon Hill’s, for example). 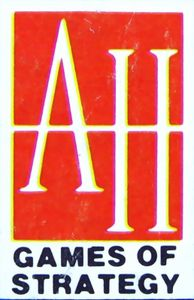 Another commonality between Avalon Hill and SPI is that both companies were caught snoozing by the rise of RPGs. Whilst for the second half of the 1970s the RPG hobby began gathering steam, both attracting customers from outside of the world of wargaming that Arneson and Gygax had emerged from as well as winning converts within that fanbase, it took until the 1980s for the two companies to realise that they were leaving money on the table needlessly. They had the size, the reach, the distribution and production capacity, as well as the overlap in fanbase, to really make a mark in this exciting new market (and revive their fortunes, flagging somewhat with the decline of their style of wargaming), but for the better part of a decade they’d turned their nose up at RPGs, with the result that TSR was able to consolidate its first mover advantage and other small presses and new companies were able to rise up and cater to those wanting alternatives to D&D.

In 1980 SPI made their move with DragonQuest, which managed to get a bit of critical acclaim and a certain level of commercial success. (As well as SPI’s own support line, Judges Guild made some third-party products for it, and Judges Guild generally didn’t bother to do that unless you’d attained a certain level of popularity.) It wasn’t enough to fix SPI’s financial woes, however – which debacles like their other roleplaying effort, the official Dallas RPG, didn’t help.

As I’ve recounted in my article on Arcane‘s old features on what were considered “retro” RPGs back in the mid-1990s, a bit of financial chicanery from TSR – in effect pretending like they were offering SPI a loan to help them survive, only to then pull the rug out from under them, grab all their assets, and hang them out to dry – killed DragonQuest; TSR’s almost-total mothballing of SPI’s intellectual property has only fuelled speculation that this was a cynically anticompetitive gambit to take out either SPI in general – TSR was still competing in the wargame field to an extent at the time – or DragonQuest specifically.