Spire as an RPG has now settled down into a fairly comfortable cycle of run Kickstarter/release wave of products/rinse and repeat. It worked for the core book and the Strata supplement, it worked for Heart – theoretically an independent spin-off RPG, though it’s set in the same universe and has some Strata-usable bits and seems to have been used as a means of clearing the creative cobwebs to come back to Spire with a fresh perspective – and now it’s worked for the Sin supplement and its associated lesser releases.

I’m posting this as a mini-Kickstopper rather than giving them the full treatment, mostly because there’s nothing very exceptional to say about the delivery process. Sure, the physical books this time took a while to get to backers, but we’re in the middle of a paper shortage and a total breakdown of the international shipping system, it’s not meaningfully something which was in the hands of Spire publishers Rowan, Rook, and Deckard to actually affect. Instead, I’m merely going to give this wave of material a quick look and a sniff to see how it’s shaped up.

The tentpole of this wave of material is Sin, a hardback supplement like Strata was. In the case of Sin, there’s a pinch of system stuff here, the most significant being of two new classes, the Gutter Cleric who’s a sort of unlicensed theologian, and the Mortician Executioner. (In theory, executing people is banned in Spire, so the city get around it by having morticians pronounce the condemned dead and then make the appropriate adjustments to make their status fit the paperwork.) However, by far the biggest draw here is going to be the wealth of setting material, all collected under the three broad categories of Crime, Order (policing), and Religion. Good judgement is shown in dealing with these subjects; the material here is meaty and exciting, but (for example) they decide not to categorise sex work within crimes because criminalising it and/or dwelling on crimes against sex workers for titillation is thematically lazy and contributes to crappy real-world attitudes the writers are not interested in promoting.

All of this provides a deep well of material for referees to draw on in planning Spire sessions, or for players to latch onto and proactively pursue should they wish; each section also has a little adventure associated with it which makes use of the chapter’s themes. Indeed, there’s so much in here that trying to read it all and absorb it and implement it as a block is going to be unviable – it’s much more useful to dip into if you want to run an adventure on a particular theme, or if the players are interested into digging in the intricacies of high-status crime among the high elves or weird cults or whatever. Need a location, an NPC, or organisation based around one of the themes in here? You’ll probably find one in Sin, and given that Spire is a game in which the PCs are all criminals in a forbidden cult fighting the cops, you’ll likely have lots of reasons to go looking.

END_OF_DOCUMENT_TOKEN_TO_BE_REPLACED

I’ve previously covered how Rowan, Rook & Decard are pretty dang reliable when it comes to delivering on their Kickstarters, and this has remained true of their latest, so I won’t be giving their new RPG Heart the full Kickstopper treatment – there just isn’t that interesting a story to tell there. Instead, I’m just going to review the swag I got. Here goes! 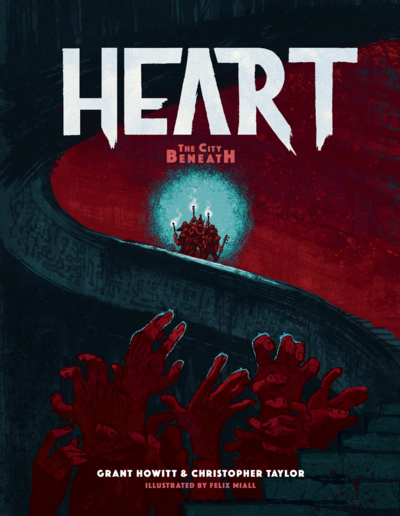 Where Spire focused on political intrigue and scheming, freedom fighter heists, social pitfalls and all that jazz, Heart is based more on the traditional exploration-and-dungeoneering type of play that very old school tabletop RPGs often focused on, but given a decidedly new school twist. The titular Heart is a region below Spire itself – an oozing wound in reality itself, that’s been leaking in strange ways ever since the high elf occupiers of the Spire tried to use it as the hub of a railway network that went wrong.

Whereas the aboveground world of the Spire is rife with racial tensions, the strange communities which make their home in the Heart and the no-elf’s-land between Heart and Spire tend to be a bit more egalitarian in that respect, consisting of individuals bound together by common agendas rather than cultural or ethnic affiliation. The Heart reshapes those who plumb its depths into the shape of their desires… but it’s clumsy at it. And in its fractured depths, it is even possible to reach entire other worlds.

END_OF_DOCUMENT_TOKEN_TO_BE_REPLACED

Over the previous Kickstarters of his I’ve covered I’ve come to respect Grant Howitt’s capabilities both as a game designer and as a Kickstarter project owner. Yes, he was involved in the Paranoia Kickstarter which turned into a bit of a debacle, but I’m disinclined to hold that against him; based on the snarky developer commentary that was released as part of that project, it sounds like he was working under a number of constraints not of his own choosing from the publishers and rights owners.

In addition it wasn’t 100% his project. James Wallis was his co-worker on it, and seemed to be very much in the senior position there; it was James, not Grant, who took an age to get the manuscript to Mongoose Publishing, it’s James who went dark to an extent that Mongoose had to put out a statement saying “Yeah, we’re not really in contact with Wallis any more, we have to filter all our communication to him through an intermediary because he won’t talk to us directly, and we’ve given up all hope of ever receiving the stretch goal content he committed to produce”.

No, I feel that the true measure of Howitt is better reflected in Goblin Quest, a game which manages to be a better Paranoia-type game than the latest edition of Paranoia was. That project, though the production of hard copies ended up being somewhat late, at least avoided becoming a morass of toxicity between game designer and backers (unlike, say, every Kickstarter that has had James Wallis in a major role), largely because Howitt was able to keep communicating with us adequately. And the actual game was pretty good too! 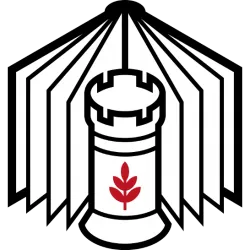 So, whilst it’s nice that Howitt has kept up a stream of additional small games, it was still exciting to hear that he, his wife Mary Hamilton, and fellow game designer Chris Taylor were consolidating their efforts and, taking on the corporate identity of Rowan, Rook & Decard, were going to Kickstart Spire – a tabletop RPG of dark elves treading the difficult tightrope between “revolutionary freedom fighter” and “occult terrorist” in a weird city struggling under an oppressive high elf regime. With Spire – and its followup project Strata – having delivered, and with new project Heart approaching completion, now’s a good a time as any to look back and see what Grant and his colleagues have accomplished with Spire and Strata…