Scott Bizar’s Fantasy Games Unlimited was an early publisher to get onboard the RPG bandwagon. After putting out some simple wargames in 1975 to get a name for the company, Bizar first entered the RPG sphere after meeting the designers of Chivalry & Sorcery at Gen Con IX in 1976, where they’d unsuccessfully (and perhaps rather presumptuously) attempted to pitch it to Gary Gygax as a replacement for Dungeons & Dragons. Signing them up, Bizar realised that there were plenty of gamers with the creativity to write their own RPGs but without the publishing resources to put them out there (self-publishing being a vastly more rudimentary prospect at that point in time), and started actively soliciting games for publication. 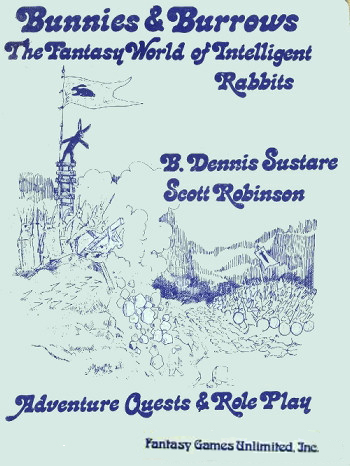 One of the earliest such is Bunnies & Burrows by B. Dennis Sustare and Scott Robinson, a charming game in which the player characters are fuzzy bunnies flopping about in a sort of Watership Down mode. They’re very bunny-like bunnies for the most part, though in some respects their capabilites go a little beyond what we humans know bunnies can do – they can carry about items in little bags, treat herbs to make special preparations, use powers of empathy and precognition, and even talk to other animals. (The exception on the latter is humans – animals can’t talk to humans for some reason, and tend to regard them as weird irrational beasts.)

Considering that D&D had only come out in 1974, to show the level of imagination involved in executing such an eccentric concept for an RPG a mere two years after the format came to mass attention is impressive. Sustare and Robinson not only give you a very clear idea of what a Bunnies & Burrows game would be like (namely, flopping about in a meadow or forest evading danger and having gentle rabbity adventures), but also make a game which is actually reasonably well-explained and engineered for its vintage.

There are eight character statistics, with a character class associated with each one – a pleasing symmetry that even D&D didn’t have. Rather than bunnies having a single level, they have a Level associated with each of their characteristics, distinct from their innate score. Each time they accomplish something or overcome a challenge, bunnies get the right to make a percentage die roll against an appropriate attribute; if they succeed at the roll, they gain a Level in that attribute, which may unlock different capabilities (some universal, some class-specific). You’re limited to one Level increase in a particular characteristic per game day, and the higher your innate score, the more chance you have of boosting your Level. Combat largely involves matching appropriate stats of attackers vs. defenders, modified based on what attacks and defences are being used.

In some respects questionable design decisions are made; for instance, you’re encouraged to keep the herb details secret from herbalist players so they can discover them via trial and error, except to be honest the number of different ways herbs can be prepared and the necessity to prepare them just right to actually get the wanted effect out of them makes me suspect that going through the whole trial and error process would just be frustrating – plus characters tend to be extremely fragile. (I mean, of course they are. They’re bunnies.) But on the whole, this FGU oddity retains a certain charm that I rather like.