END_OF_DOCUMENT_TOKEN_TO_BE_REPLACED

In mid-1980s Britain the Fighting Fantasy boom led to a craze for gamebooks of all kind. Casting about for material, Corgi Books realised that they could go back to the source to find an existing body of solo RPG adventures ripe for republication in a trade paperback format. That was the extensive number of solo adventures published by Flying Buffalo for their major RPG product, Tunnels & Trolls – in fact, they put out substantially more solo adventures than they did conventional adventure modules. In fact, with the first of these, Buffalo Castle, coming out in 1976 they have a strong claim to being the first gamebooks based on RPG mechanics. (Treasure Hunt by Alan George, which came out in 1945, is generally acknowledged as being the first gamebook in the modern sense, though it has no RPG mechanics beyond picking which page to turn to next like in Choose Your Own Adventure books.) 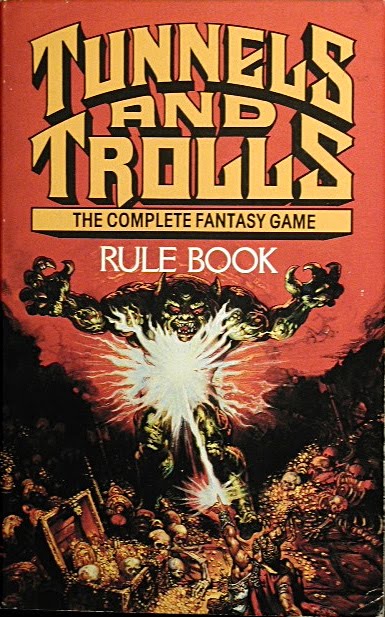 This isn’t the only “first” that Tunnels & Trolls can claim; in putting it out in 1975, Ken St. Andre can claim to have designed the first tabletop RPG which was not either Dungeons & Dragons or a transparent copy thereof. It’s a simple, stripped-down affair, in keeping with Ken’s design agenda of producing a fantasy dungeon-crawling RPG that was much less complex than D&D; only D6s are used, a spell point system is used instead of Vancian memorisation (up to and including 5th Edition this was based off your Strength score; to counter the rise of beefcake wizards the “5.5” revision added a separate magic points stat), and the class options are greatly truncated. You can be a warrior, you can be a wizard, you can be a rogue (who isn’t a D&D-type rogue – those were still called “thieves” – but is more of a dabbler who draws on warrior and wizard abilities alike), or you can be a warrior-wizard (who’s like a rogue who’s much better at dipping into both classes, but you only qualify as one if you have really good stats). Monsters are largely described by a single “monster rating” stat, which acts as both their hit points and a measure of combat power – so as they get hurt in combat they get into a death spiral. Perhaps the oddest system quirk of Tunnels & Trolls is how combat works – with both sides rolling attack rolls and adding them up, seeing which side got the higher total, and doing damage to the losing side based on the difference.

These days Tunnels & Trolls gets reprinted in a new edition every so often, though to be honest the updates seem to be largely aesthetic these days. After a quick edition churn in the game’s early days, the 5th edition was arrived at in 1979, and remained the current edition until the 5.5 update in 2005, which patched the 5th edition rules with a little extra material, and the concurrent 30th Anniversary Edition which represented a more radical update of the game, modifying the level-gain process and adding in a skill system.

For my part, though, I swear by my Corgi reprint of the 5th Edition rulebook, with those lovely Josh Kirby reinterpretations of the original artwork; it feels like trying to add modern features like a skill system to Tunnels & Trolls is kind of redundant and steers its away from its core strength. We already have a reasonably simple dungeoneering RPG with a skill system – it’s D&D 5E – but Tunnels & Trolls stands out for being a nice pick-up-and-play game suited to solo or group play equally and which you can play with just a few six-siders. Tunnels & Trolls isn’t without issues – there’s a mind control spell called “Yassa Massa”, which reads like a jarringly pointless racist joke, but in its classic format it offers pocket-sized fun to an extent that innumerable OSR attempts at a stripped-down D&D haven’t been able to compete with.