This is a bit of a housekeeping article, to be honest. Arion Games, Graham Bottley’s small press RPG outfit which happens to have the licence for reprinting and producing new Advanced Fighting Fantasy material, fairly regularly does Kickstarters to produce new material for it, and indeed I’ve reviewed one here before, and I’ve let several stack up where I didn’t have enough to say about one or the other to really justify a full article. 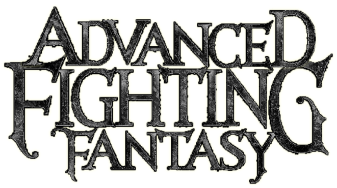 In the spirit of spring cleaning, I’m getting around to covering these now. Let’s go!

END_OF_DOCUMENT_TOKEN_TO_BE_REPLACED

Daniel Sell’s Troika! is billed in some quarters as being based on “the Other world’s favourite role-playing game”, and for a generation of British gamers that statement’s entirely true – in the core principles of its system, it’s very much a product of the Fighting Fantasy lineage, and given how widely-played those gamebooks were in the 1980s and 1990s I think it’s entirely likely that more British kids of that generation had direct exposure to Fighting Fantasy than Dungeons & Dragons itself.

More specifically, in system terms Troika! is a refinement of Advanced Fighting Fantasy, with some tweaks made to deal with such things as monsters lacking Advanced Skills, an interesting initiative system based on drawing tokens which means that not every character will necessarily act on every combat round if they’re unlucky and keeps things unpredictable, and other tweaks. Between that and Emmy recommending it in our discussion of Esoteric Enterprises, I thought I’d give it a look. 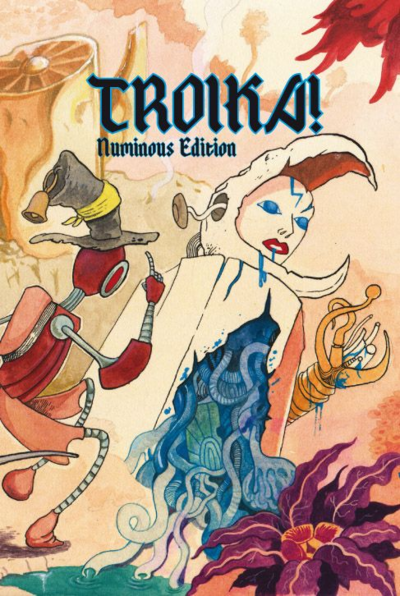 In setting terms, the game is a hyper-weird science fantasy thing which cites material like Viriconium or The Book of the New Sun – we’re talking somewhere between Everway, Planescape, and Mahna Mahna in terms of concept, with an aesthetic that can take on anything the more artsy side of the “weird fantasy” school of the D&D-based section of the OSR has produced.

That said, I find the presentation of Troika! far more interesting than that Monte Cook used in Mahna Mahna, beyond the fact that the art style is simply more interesting. Whereas Mahna Mahna presented its setting much in the same style as typical RPG setting presentations of years past, Troika! communicates most of its setting through the randomly-assigned backgrounds characters get and the monster and item descriptions. This allows Sell to set tone and establish some baseline facts but leave a lot open to the individual creativity of your specific gaming group, and it’s more or less explicit that the game is not an exercise in producing a set canon for a single version of the setting so much as it’s a toolkit to allow you to arrive at your own version of the setting.

This is inevitable based on the way the information comes out in the process of play: having a different set of backgrounds in play will put different facts about the setting at the forefront of the group’s mind whilst leaving other facts by the wayside, for instance. This sort of “implied setting” approach has been tried by other games before, especially in the OSR (where people have developed a keen appreciation for how OD&D or Classic Traveller delivered their implied settings), but Sell is especially good at setting it up. In particular, he seems to have a really nice knack for giving you enough material to give you a general idea of appropriate tone and style and enough facts that you feel like you aren’t just making shit up in a vacuum, but at the same time keeping things terse enough that it doesn’t feel like a burden to incorporate all of these ideas into your game.

As such, it’s a nice example of a game which, despite being a bit high-concept, could viably be run on a pick-up basis – there’s even a nice sample location at the end which can nicely act as a jumping-off point for bizarre improvised adventures in the bizarre multiverse of the game – because it avoids the pitfall of games like The Whispering Vault, which was intended as a pick-up game but in practice is based on a concept and setting that’s sufficiently fiddly and involved that you have to do a bunch of reading before you can actually start playing. Equally, precisely because the setting is as thinly-drawn as it is, you can mash this up with any other “weird science fantasy” RPG product (which the OSR and wider indie scene produces in reasonable numbers) and it works like a dream. (I’m extremely tempted to match this up with the bizarre Ultraviolet Grasslands wilderness crawl, for instance.)

Previously on Kickstopper, I’ve given the thumbs up to both of the funded projects I’ve reviewed so far (namely Shadowrun Returns and To Be Or Not To Be). This time, I cross the streams of two ongoing article series by reviewing a Fighting Fantasy-themed Kickstarter – namely, the funding of Beyond the Pit, a new collection of monsters for the Advanced Fighting Fantasy tabletop RPG.

As always, different backers on a Kickstarter will often have very different experiences and I make no guarantee that my experience with this Kickstarter is representative of everyone else’s. In particular, I’m only able to review these things based on the tier I actually backed at and can’t review rewards I didn’t actually receive.

END_OF_DOCUMENT_TOKEN_TO_BE_REPLACED

Steve Jackson (the UK one, not the US one responsible for GURPS) and Ian Livingstone have made no bones about the fact that the classic Fighting Fantasy gamebooks were originally designed to act as gateway drugs into tabletop RPGs – the duo having been primarily responsible for introducing the hobby to the UK as co-founders of Games Workshop.

The franchise soon gained a life of its own, however, and it was inevitable that in the 1980s height of the craze that the feedback loop would complete itself, with Fighting Fantasy spawning an RPG of its own. In fact, mimicing the split between Basic and Advanced variants of D&D, it eventually spawned two RPGs – one an iconic introduction to the hobby, the other a massively flawed attempt to build a full-blown RPG out of it. The latter has enjoyed a 2nd edition release from Arion Games – but has Arion managed to sort the wheat from the chaff?