Pity Mekton. After Mekton II managed to gain traction despite its flaws (due, perhaps, to having very little in the way of competition beyond Palladium’s Robotech RPG), Mekton Zeta provided a somewhat tidied up and debugged (albeit at some points quite crunchy) take on the game. Still, you’re talking about a 1994 design there, and there’s an appetite for further refinement and polishing. That appetite drove a Kickstarter for Mekton Zero, a new edition of the game, which raised some $50,000 in 2013. 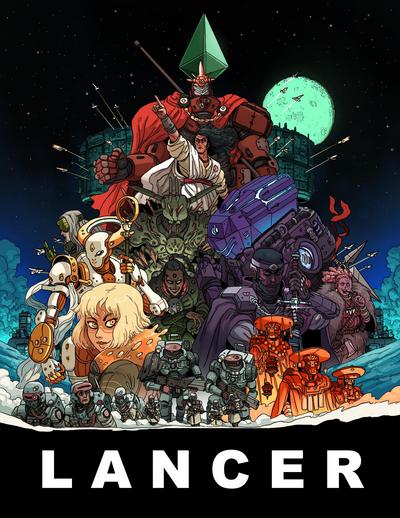 However, the development and writing process for the game bogged down, and in 2018 Mike Pondsmith made the decision that, rather than allowing it to be another Far West situation, he was going to refund everyone’s pledges rather than making any promises about if and when the game would eventually come out. Since then, when it comes to new material R. Talsorian Games has had more success in getting out the starter set for Cyberpunk Red, their new edition of Cyberpunk (putting the Cyberpunk 3.0 timeline aside and acting as a bridge between Cyberpunk 2020 and the Cyberpunk 2077 videogame), with the core book delayed at first to ensure lore consistency with the videogame and then due to the COVID-19 pandemic.

Perhaps Pondsmith will, one day, come back to Mekton Zero – but if he does, he’ll find there’s new competition. Massif Press’s chunky new Lancer RPG takes the same general gameplay breakdown of Mekton – rules-light, largely freeform play for when your characters are out of your mechs shifting into crunchy, tactically rich combat when you get into a mecha fight – and applies fresh eyes to the concept, yielding a much more modern system for delivering the same general deal.