END_OF_DOCUMENT_TOKEN_TO_BE_REPLACED

One of the cornerstones of Dragonmeet is the bring-and-buy sale, and on the sale stall this time for the deliciously small price of £5 was a much-battered, clearly extensively used in play copy of 1st edition Rifts.

Rifts is pretty infamous, as is its author Kevin Siembieda and his publishing company Palladium Books, but that infamy seems to me to be a bit patchy. I’ve always had the impression that Palladium fandom was the sort of thing which was very regionally concentrated; you had tight clusters of Palladium fans here and there where their games had taken off, and outside of those bubbles you had numerous gamers who either write them off entirely as juvenile nonsense or haven’t heard of them. 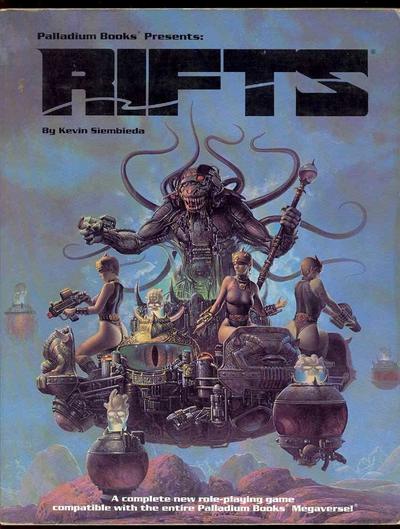 To be fair, in the intervening years since Rifts came out Palladium have done their reputation few favours. Former employees and freelancers have talked of how difficult it can be to work with Siembieda, with this RPG.net post from Bill Coffin being a particularly evocative example. The company’s public-facing communications are usually heavily focused on making a sale to you – which arguably is the case for most PR statements issued by any company, but Palladium’s sales pitch comes across as particularly strident, artless, and nakedly hucksterish; a bit too much like a used car salesperson desperately trying to close a deal, and in a way which can put people’s back up.