Hunter: the Vigil had some tricky precedent to tackle when it was released for the new World of Darkness line (now retitled Chronicles of Darkness). The original World of Darkness hunter-themed game, Hunter: the Reckoning might have had its advocates, but that didn’t stop it from being a big turn-off to a large number of people who just wanted a game that played off the principles originally established in the classic supplement The Hunters Hunted, with basically ordinary human characters called on to fight supernatural menaces. Instead, what they got was this weird thing where the titular hunters were more properly called the Imbued – folk who suddenly got voices in their heads and enhanced senses and other supernatural powers to enable them to go toe to toe with supernatural entities, effectively making Hunter: the Reckoning yet another World of Darkness game about people who thought they were ordinary normal humans but then had some sort of cosmic puberty/near-death experience which made them something special and different. 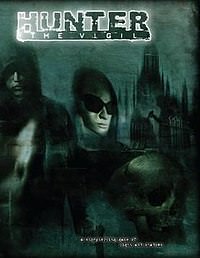 The thing is, you can kind of see how that happened. White Wolf had, from even their early days, boiled down their style of presenting an RPG book – especially a core rulebook – into a formula, a pattern set by the original Vampire: the Masquerade and refined over time but rarely if ever departed from, right down to the little “Theme” and “Mood” sections at the start of the book. Whilst Ron Edwards’ waffle about how White Wolf fans were brain damaged to the point that they couldn’t understand how to put together a story was obviously offensive hyperbole, one can certainly see how if your only creative hobby or engagement with storytelling consisted of World of Darkness games you would end up with a rather blinkered approach – and, more to the point, how whilst White Wolf wasn’t actually causing physiological brain damage to anybody through its working practices, you could make an argument that it was causing institutional brain damage to itself through its extremely formulaic approach.