It really isn’t Chaosium’s fault that their Ringworld RPG didn’t last all that long. Shortly after its publication, the movie rights to Ringworld were picked up, and Larry Niven was obliged to pull the RPG licence because supposedly there was some sort of clash between the licences. Of course, given that the Ringworld movie has spent the past thirty years or so in development hell that’s a bit of a shame – and it surely isn’t beyond the bounds of possibility to work something out. (One suspects Niven’s agent just doesn’t consider it worth the hassle.) 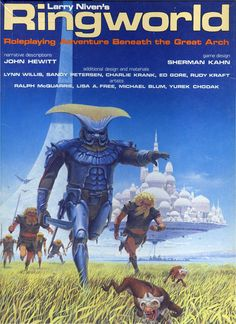 As such, it’s become a major rarity, prized by gamers and fans of Niven’s Known Space setting alike. When Niven started the Man-Kzin Wars series, in which he set aside a particular span of time in his future history for other authors to play with in a shared-world fashion, he needed a writer’s bible for the setting – rather than writing one from scratch he just photocopied the RPG.