The cynic in me suspects that the actual motivation behind Worlds of Wonder was to find something to do with an overstock of the Basic Roleplaying booklet – with second editions of Call of Cthulhu and Stormbringer rapidly taking the step of integrating those rules into their main text, which was found to be preferable to having to flip back and forth between the Basic Roleplaying booklet and the main book for the game in question, I think Chaosium probably found themselves having to work out what to do with the excess booklets they’d printed.

That theory would certainly explain the total lack of support that the core Worlds of Wonder box received, and the swift abandonment of most of the tangents proposed therein. Future World was dropped completely; Magic World was abandoned and though a game of that name was eventually released in subsequent years, in practice that version didn’t have all that much to do with the original Magic World booklet beyond the title; it was more of an attempt to reprint the late-edition Stormbringer rules in a setting-neutral fashion after Michael Moorcock pulled the Eternal Champion licence. 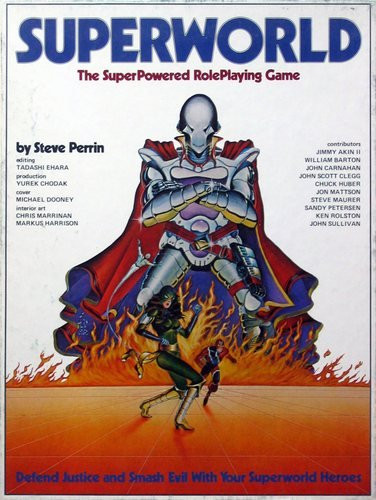 Superworld was the big exception; evidently a pet project of Perrin’s, it was further developed over the subsequent year and came out in 1983 as a fully-developed standalone RPG in its own right, and whilst there wasn’t an enormous amount of material written for it and it tends to get overshadowed in discussions of early superhero RPGs by Villains & Vigilantes and Champions, it did at least make a minor splash at the time and has something of a legacy. (George RR Martin’s Wild Cards series started out as a Superworld campaign.)

Perrin’s approach to the system is heavily inspired by the way Champions handles powers – you have the basic power writeups, they all cost a certain number of hero points, and there’s various ways you can upgrade them which cost extra points or attach strings to them (or to your character in general) to get points back. Super-stats work by adding a set number of points to the stat in question for each hero point you invest in that, and skill enhancement works by adding a number of percentage points to a skill each time you put a hero point into it. Sometimes this is a flat 5%, sometimes this is linked to your stat, so if you have a really good score in a particular stat you can conceivably get very good at associated skills for a modest investment.

The way you determine how many hero points is by totalling how many points you have in your main stats (STR, CON, DEX, SIZ, INT, POW, APP) when they are initially determined before adding in any super-stat shenanigans, and the way you determine your base stats is by rolling 2D6+6 for each of them (as opposed to 3D6, which is what average normals roll). This is a weird amount of potential variance to throw in, particularly since Perrin is obviously aware that you could just set a point budget and then have people spend that number of points first on their base stats and then on their powers, since this is how he suggests you do NPC design, so for some reason Perrin seems to think that randomisation is essential for PCs; I would personally be tempted to just say “you have a 100 point budget and must put a minimum of 9 in each stat”.

With play going forwards, hero points become a convenient experience point mechanic in addition to the usual BRP raising skills/stats through use mechanic. The other major bit of budgeting players have to manage is their store of energy, which is used to drive powers requiring it and resembles a somewhat simpler take on the energy mechanic from Champions.

As far as the actual world of Superworld goes, you honestly don’t get much of one – instead you get various suggestions about setting types you could use, ranging from modern day superhero stuff (in a shiny optimistic mode because this predates Watchmen) to the wild suggestion of setting the game in the ancient world with the superheroes as flat-out demigods. Two sample adventures are provided, including an amusing parody of The Haunting from the core Call of Cthulhu rules, and the fact that they do that pretty much sums up the Superworld attitude: it’s light, it’s cheerful, it doesn’t take itself especially seriously (it notes that in some conservative areas some superhero costumes may get you charged with public indecency) and it isn’t going out of the way to be especially realistic. As a rules-medium alternative to the much heavier Champions it’s pretty good, especially if you are comfortable with BRP and want a power design system that follows similar principles to Champions but doesn’t have the same complexity (and consequently doesn’t quite have the same adaptability).

A Companion to Superworld 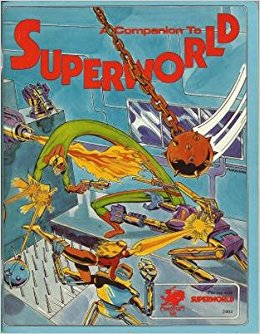 This is the only major supplement released for Superworld and is a grab-bag of little articles on various subjects. You get Steve Perrin offering clarifications and errata on the original rules, but refreshingly he stresses that you only need to apply these if you decide that you prefer the tweaks. You get additional guidance on some aspects of the Superworld rules, as well as a nice expansion of the powers system. You get an article on the weather, which feels a bit odd (exactly who was crying out for this addition?).

Perhaps most interestingly, you get guidelines on converting Champions and Villains & Vigilantes material to Superworld, effectively turning Superworld into a sort of universal translator for early superhero RPGs. This came at a time when cross-system material for RPGs was the current hotness and Chaosium were at the head of that – they also put out the Thieves World setting cross-statted for a vast number of different fantasy RPG systems. Still, with the book closing out with an extensive description of a superhero (or supervillain) base you can drop into your game dual-statted for Superworld and Champions the limitations of this approach rapidly becomes apparent, because the space taken up by the stat boxes rapidly becomes startling.

I also tend to think it shows a lack of overall confidence in the Superworld game – as though it isn’t strong enough to stand on its own. Indeed, in retrospect Steve Perrin has said that he thinks Superworld was actually too similar to Champions, and support for the game line would soon dry up – at Chaosium Perrin was already moving on to other projects like the Elfquest RPG and the third edition of RuneQuest, and having established a good relationship with Hero Games he subsequently scratched his superhero itch by writing material for them instead.

That said, Champions evolved in its own direction subsequent to this, and even the 4th Edition Champions of the Big Blue Book is a much bigger beast than Superworld. As such, I think Superworld has now ended up in a rules-medium niche of its own which it didn’t have before, occupying territory which Champions used to sit in in its simpler earlier editions but which it has now evolved away from. Though Superworld is not in print, PDFs of its various products remain available through Chaosium, and long may they remain so.