Chaosium’s 2012 Magic World RPG was, at its heart, a version of the 5th Edition Stormbringer system with the Michael Moorcock-specific aspects polished away so that the game could act as a generic Basic Roleplaying-powered fantasy RPG, much as the 3rd Edition of RuneQuest had in the past and games like RuneQuest 6th Edition, Legend, and OpenQuest would be doing at around the same time as Magic World made it to publication.

What’s quite interesting about Magic World is that, by being primarily based on a setting-neutral version of Stormbringer instead of a setting-neutral version of RuneQuest, it’s starting from a somewhat simpler baseline, which allows it to stand out somewhat in what was a crowded field. Ben Monroe’s Southern Reaches, the sample setting in the core book, was also interesting to some, though I found there was an unfortunate lack of detail on how system concepts like Light and Shadow played out there. 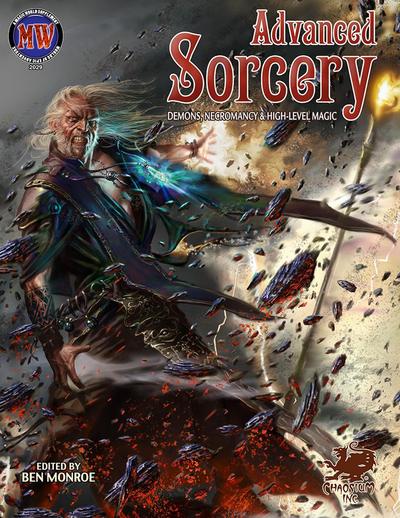 In the comments on my Magic World review, Ben was nice enough to swing by and talk about the plans he’d had for the line, which would have included a supplement line in which each supplement would either be mostly generic content with a significant pinch of Southern Reaches stuff, or mostly Southern Reaches stuff with a bit of stuff for more generic use. I imagine as the line went on, this might have led to a closer integration of the rules into the Southern Reaches setting.

In the end, Monroe was only able to bring out Advanced Sorcery before the old regime at Chaosium collapsed and a new crew came on, who made the decision to stop putting out new Magic World for the foreseeable future as part of a bid to refocus on key lines and generally reconfigure the company into a more sustainable shape. The book is a collection of alternate magic systems and expansions to the existing magic systems in Magic World.

In some respects it offers an interesting glimpse of what Magic World could have evolved into, with Monroe’s rules for fae magic in the Southern Reaches giving some crucial rules underpinning to Reaches-specific concepts whilst other ideas suggest interesting directions for other settings. There’s a Deep Magic system which offers a sort of keyword-based freeform casting system, for instance, and “Arete” – a system in which characters whose skills end up exceeding 100% can end up attaining quasi-supernatural or genuinely supernatural effects from their superhuman competence.

At the same time, however, Advanced Sorcery is still very much a product under the shadow of previous products, since a good chunk of the material in it originally hailed from sources Chaosium can no longer republish like RuneQuest Vikings and The Bronze Grimoire. Thus, it’s still part of Operation Repurpose Old Material, as Magic World was, rather than consisting of wholly-original work.

Lemmy died recently. Before he made Motörhead happen, he was in Hawkwind, who also collaborated regularly with Michael Moorcock. Michael Moorcock has written an awful lot of stuff, but perhaps his most famous work is the story of Elric. Therefore, this is a good time to talk about Chaosium’s Stormbringer RPG and its successor game, Magic World.

Are you buying this? Never mind, I’m going to review them anyway.