I tackled the beginning of the venerable series, and I covered Ian Livingstone’s inspirational run of solo-written gamebooks, as well as the first book written by a third party. Now, whilst the books in the second review were being written and published, Steve Jackson wasn’t standing idle – he was producing Sorcery!…

The first of the Sorcery! series came out in 1983, and with 456 numbered paragraphs was the largest Fighting Fantasy adventure published at the time – but, to give you an idea of the scope of Sorcery!, it’s actually the shortest gamebook in the sequence, with the final volume having a whopping 800 paragraphs; the full saga comprises over 2200 paragraphs. With a single story mapped out over four gamebooks, intricate connections between the books, a full spellcasting system, and the option to play as a warrior or a wizard. 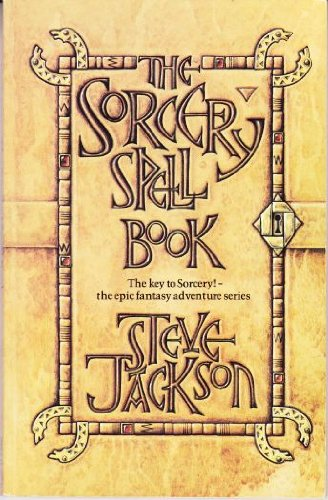 Considering the unique nature of this series, I’ve changed the format of the reviews a little: I’ll cover the scenario and the system in this first little segment, and then the entries for each book will cover my attempts at solving them, as well as the possessions I had managed to accumulate so far.