Back when I reviewed the 1st Edition of Vampire: the Masquerade, I took note of the various other RPGs cited in Mark Rein-Hagen’s afterword (only included in later printings). One game which was conspicuous by its absence from this list is Prince Valiant, a Chaosium RPG based on the Arthurian newspaper comic strip by Hal Foster. Emerging in 1989, not only does it proudly proclaim itself a “Story-Telling Game” on its front cover, but it also explicitly refers to the referee as a Storyteller, works in the idea of rotating the Storyteller position over the course of a game (which may be influenced by Ars Magica‘s ideas about troupe play), and has what is effectively a disguised die pool system. 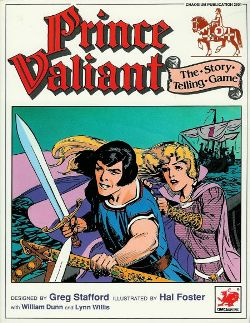 To cover that latter point in brief: in principle, rolls in Prince Valiant are actually based on coin tosses – you add together stat and skill, toss an appropriate number of coins, and count heads as successes. This seems to have been a decision made in part to make the game approachable to non-gamers who might not have dice handy, but almost certainly have coins – but whilst tossing a bunch of coins in sequence is burdensome, you can roll much faster and get mathematically equivalent results simply by rolling a bunch of dice and, say, taking odds as successes and evens as failures, or rolls of over 50% of the maximum roll as successes (so 4-6 on a D6, or 3-4 of a D4, or 11-20 on a D20).