With UFOs high in the zeitgeist in 1992, and shortly before The X-Files made the subject matter a full-blown pop culture phenomenon, Pagan Publishing’s Call of Cthulhu fanzine The Unspeakable Oath published a little adventure called Convergence, which introduced the concept of Delta Green – a top-secret, unsanctioned, off-the-books conspiracy within the US government to investigate and contain the threat of the Cthulhu Mythos. 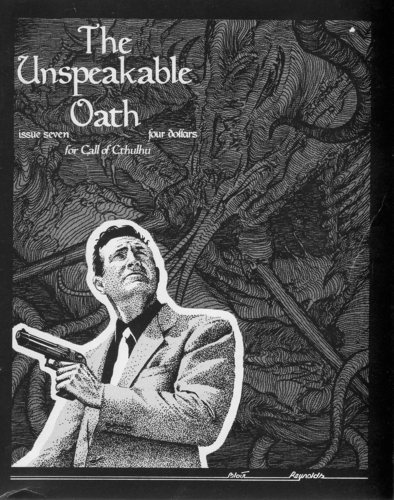 In years to come, Convergence would begat a whole swathe of supplements. The original run of Delta Green material would provide an exciting model for modern-day Call of Cthulhu play. In more recent years, Arc Dream Publishing – consisting of many former Pagan personnel and generally speaking the inheritors of their illustrious mantle – has turned Delta Green into its own standalone RPG, though not with a system so radically divergent from 5E/6E Call of Cthulhu as to render the original supplements useless. In essence, the Delta Green RPG is a fork of Call of Cthulhu, with adaptations and changes made to better reflect the style of the Delta Green setting – substituting out the Call of Cthulhu sanity system for an adapted version of the Unknown Armies one being the most significant system deviation.

Sooner or later I’ll be doing Kickstopper articles covering the new Delta Green RPG, since the product line has been underwritten by crowdfunding efforts, but until then (and to avoid those articles getting even more absurdly big than they are already), here’s some reviews of the original run of supplements.

END_OF_DOCUMENT_TOKEN_TO_BE_REPLACED

John Tynes just wrote a very fascinating essay on his “narrative sandbox” approach to writing investigative scenarios. It was posted as an update to the Delta Green: The Labyrinth Kickstarter, but it’s sufficiently interesting (particularly in the light of my own issues with how GUMSHOE does things) that I don’t think it deserves to linger there.

In particular, he aptly describes how his approach differs from the GUMSHOE approach: as he describes it, the narrative sandbox is much more like the process of actually investigating something yourself, whereas the GUMSHOE method is really more about getting across the feel of watching an investigation-themed movie or television show.