The story so far: Mythras is the Design Mechanism’s fantasy RPG designed by Lawrence Whitaker and Pete Nash. It was formerly known as RuneQuest 6, but then when Moon Design Publications (owners of the RuneQuest IP rights) took over control of Chaosium they elected to wind down the RuneQuest trademark licence so that they could use the name for their own new Glorantha-focused edition of the game. Mythras is, as I’ve outlined before, one fantasy-oriented Basic Roleplaying-esque system out of many. There’s some system aspects to it which make it stand out, like special moves in combat, but I don’t think it’s so much better than, say, OpenQuest or Magic World or the new or classic iterations of RuneQuest that these aspects alone provide a decisive advantage.

Indeed, as the proliferation of BRP/RuneQuest-inspired systems demonstrates, it’s wickedly hard to retain proprietary control over a particular rules concept in tabletop RPGs; you can stop people ripping off your text exactly with copyright provisions, but nothing stops others from taking the underlying idea and reimplementing it. The new regime at Chaosium have followed a policy of tying their games to distinctive, exciting game settings, perhaps realising that you need a combination of a hot setting and an interesting system to really catch people’s eyes in today’s RPG market.

The Design Mechanism are not unaware of this, and have spent some energy on developing new setting books for Mythras; here’s a look at a sample of them. 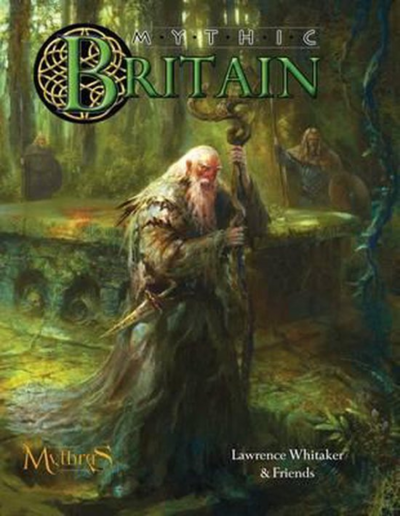 Mythic Britain is the first of a series of Mythic (Place) supplements for Mythras. It makes sense that Design Mechanism would produce such releases; as well as being of general interest as culture sourcebooks, such materials helps them position themselves as the inheritors of the “fantasy Earth” setting that Avalon Hill tried to push as a default for RuneQuest 3rd Edition before they belatedly pivoted back hard towards Glorantha in the later phases of that product line.