Aberrant is a big colourful mess. Part of a continuity of games including Adventure and Trinity (AKA Aeon), which Onyx Path are now reviving with a comprehensively rejigged system as the Trinity Continuum game line (with Aeon as the first major setting book), part of its awkwardness comes from the fact that it was trying to act as the superhero-themed midpoint of a setting which ranged from the pulp adventure of, uh, Adventure to the starfaring psi-wielding antics of Aeon. Though you can see conceptual links between the genres, that’s still a sequence of jarring, clunky gear changes, and a big pile of baggage that each individual game would have never had to deal with (and have been stronger for it) had they not been set in the same continuity. 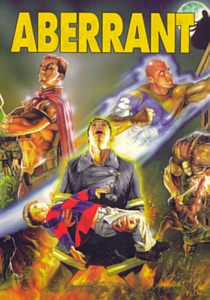 Aberrant is also often derided for its system, which attempts to extend the Storyteller system into superheroics and somehow manages to make a clunky mess of it, despite the fact that Vampire‘s early editions managed it perfectly well, but the thing which personally turns me off it is the setting. Part of it arises from the fact that, in diverging from real life in 1998, some of its predictions now seem kind of laughably out of date. Part of it arises from simple research failures (like the UK deciding to stay out of the European Union in the 1990s – a body it had already been a member of since the 1970s).

But most of the reason the setting doesn’t click with me is that it’s tryhard 1990s edgelord nonsense, with each faction carefully crafted to be maybe heroic but probably secretly evil. (The major exception are the Teragen, who seem to be pretty clearly monstrous on the face of it.) Maybe part of this comes down to the necessity to have the superhumans one and all become the villains of Aeon/Trinity later on down the timeline, but probably a larger part of it comes from the fact that in the 1990s everyone was trying to be darker than everyone else in the superhero field. Watchmen and The Dark Knight Returns had been out for a decade and had become enshrined at the peak of the comic book pantheon, and everyone wanted to recapture that. Dark Champions steered Champions into the grim and gritty mode of the era, and all was darkness and drabness.

What’s weird for me about the Aberrant setting is that it isn’t, in many respects, all that grim and gritty – in fact, in an awful lot of respects it’s a much cleaner, brighter timeline than the one we got. (The fact that it doesn’t include 9/11 or anything like the War On Terror is a big factor; even the clashes of superhumans feel like they pale in comparison to the Iraq War or the slow, gruelling death of Syria.) This is presumably to allow a space for gamers to run a more four-colour take on the whole concept if they really want to. The problem with that is that the basic presentation of the factions has enough sneering 1990s cynicism to it that it doesn’t quite work – what you end up with is a bunch of shitty, self-serving factions suitable for a post-Watchmen grimfest in a world that’s just a few notches too bright and colourful for them.

The incongruity doesn’t quite work for me – as with the various settings that have been put out for GODLIKE or Wild Talents, or even for that matter Champions, I think you get much better results if you make a firm call on what sort of superhero setting you are going for and then design it from the ground up to support that decision, rather than trying to build a setting which can waver all the way from four-colour black-and-white-morals Comics Code Authority vapidity to edgelord Frank Miller/Alan Moore ripoffs.

Then again, the entire story of the Trinity game line seems to have arisen out of a series of messy compromises and hastily cobbled-together settings; the original Aeon setting had to be knocked out in a space of 10 months after Mark Rein-Hagen walked away from White Wolf in 1996 and took Exile, the sci-fi game series he’d been developing, with him. The games do have their advocates – Adventure seems to have a certain charm to it, perhaps because as the first game in the line it carries the least baggage, but both the Aberrant and Aeon settings have their advocates too. Part of the point of the new Trinity Continuum game line is to apply a new system to the setting (the Storypath system, which has also been used for the new edition of Scion), one better suited to it than the rather overheated Storyteller engine under the hood of 1st edition Aberrant; if this also includes giving the setting a comprehensive tune-up, perhaps even offering specific sliders to better adapt it to different takes on the superhero genre (“If your morality dial is set to ‘Frank Miller’, use the ‘evil’ version of Project Utopia”, etc.), then that might be just the tune-up the old beast needs.