Swordbearer is part of the glut of fantasy RPGs which came out in the early 1980s – in which I’d include DragonQuest, Powers & Perils, Rolemaster, Palladium Fantasy, and The Fantasy Trip. Sure, there’d been a sprinkling of new fantasy RPGs over the course of the 1970s, but it does seem like there was a little bubble around 1980-1983, especially at the upper end of the market – you can see for yourself on the year-by-year breakdown on John Kim’s highly useful RPG encyclopedia. 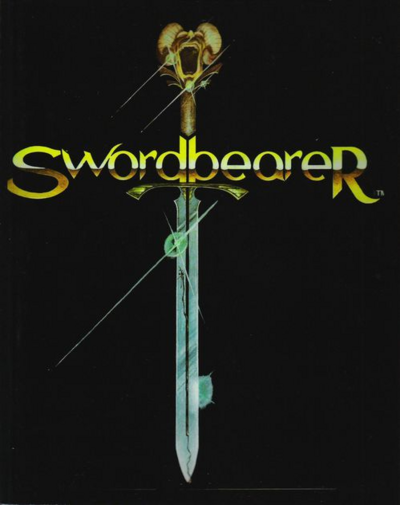 Why this would be the case you can ascribe to a number of factors; the spike in the commercial fortunes of D&D with the release of the mega-popular Basic Set in its different versions (Holmes, Moldvay, and Mentzer’s iterations doing increasingly well) made it clear that there was a gravy train to catch if you could write a suitable ticket.

At the same time, the success of RuneQuest demonstrated that there was a hunger in the market for fresher, more innovative fantasy RPGs, a hunger which was perhaps exacerbated by the release at the end of the 1970s of Advanced Dungeons & Dragons. The Basic Set was explicitly for beginners, and those who looked past it to B/X D&D would find a game which was essentially a clarified restatement of OD&D – hardly something to satisfy the appetites of gamers dissatisfied with the same old way of doing things – and AD&D, whilst tremendously popular, was also rarely played rules-as-written.