RPG starter sets are in vogue again. There was a time when they more or less went extinct, except for extremely desultory efforts by TSR or Wizards of the Coast, partly because they can be tricky things to produce and partly because publishers of games other than Dungeons & Dragons assumed that nobody would pick up their products who wasn’t already fully aware of what sort of game these RPG things were and who weren’t already specifically looking for the full-fat version of the game in question.

To be fair, that seemed to be reflected by the market realities; for the most part, companies other than TSR/Wizards didn’t manage to get their products distributed outside of specialist gaming shops, and many such shops were of such a nature where you were deeply unlikely to spend much time browsing there unless you were very much interested in their contents. Where a game did manage to obtain a sudden following of people who hadn’t previously been RPG customers, as Vampire: the Masquerade did, it was typically seen as the result of a catching-lightning-in-a-bottle moment which it was pointless to try and capitalise on by building a smoother, easier onramp. (It’s bizarre that Masquerade never had a starter set, when you think about it.) 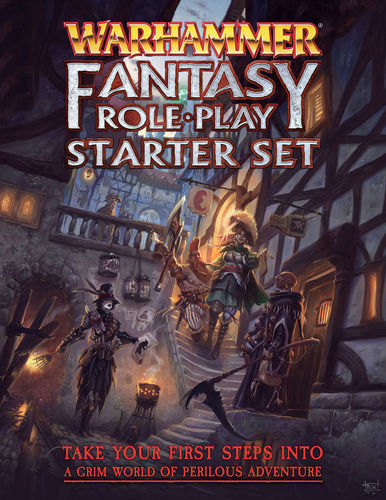 The craze for actual play podcasts and YouTube series – spearheaded by Critical Role but with a healthy penumbra of other shows around it, several of which step into games beyond D&D from time to time (Critical Role itself did a one-off Call of Cthulhu episode lately) – seems to have exposed a bunch of people to tabletop RPGs lately, and whilst a good many of them will likely never extend their involvement beyond watching the shows in question, at least a subset of them are likely to look deeper.

This being the case, there’s now a plausible route for people who are not currently active RPG players and referees to discover a whole range of games which would have escaped their notice in previous eras – and that being the case, it’s suddenly substantially more worth it to at least consider doing a starter set for your game, especially if its core rules are sufficiently complex to merit providing an easier onramp, and especially if, say, your game happens to be connected to a venerable and widely-recognised fantasy IP like Warhammer.

Thus, starter sets seem to be back on the menu. Chaosium’s one for Call of Cthulhu seems to be the gold standard at the moment, and for good reason – it’s a pretty decent collection of adventures, offering multiple full sessions of play (in stark contrast to the desultory offerings of the worse TSR/Wizards starter sets), effectively teaching players the underpinnings of the game, and more than adequately setting them up to move on to the rest of the game’s offerings, and the adventures therein are sufficiently interesting that the set offers reasonable value even to experienced gamers. WFRP has a long and hallowed history of following Call of Cthulhu‘s lead: does Cubicle 7’s Starter Set for 4th Edition WFRP manage to pull off the same trick?

END_OF_DOCUMENT_TOKEN_TO_BE_REPLACED 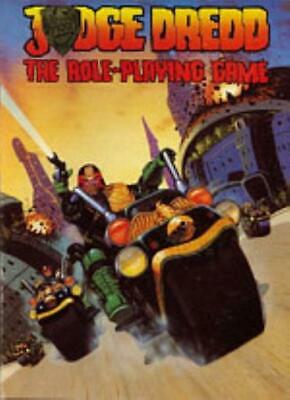 END_OF_DOCUMENT_TOKEN_TO_BE_REPLACED

Rough Nights & Hard Days is an adventure supplement for 4th Edition WFRP. It offers as a side dish some appendices detailing Gnomes for 4th Edition – an expanded version of the 1st Edition Gnome material from Apocrypha Now! – and a number of pub games popular in the taverns of the Empire and suggestions on resolving them at the gaming table, but the main course consists of five adventures by old hand Graeme Davis. 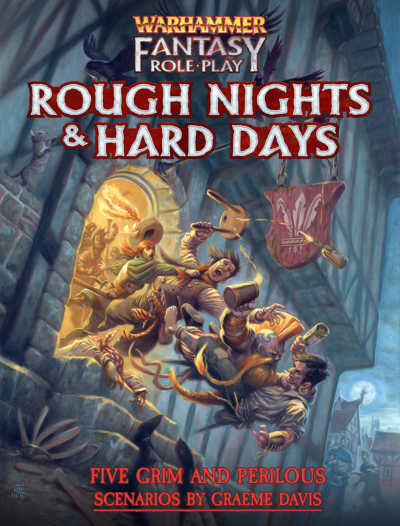 These aren’t just any five adventures, however – they’re five adventures riffing on the same adventure format, as pioneered by Davis in the 1st edition adventure A Rough Night At the Three Feathers – originally emerging in White Dwarf, later reprinted in The Restless Dead and Apocrypha Now during the 1st Edition days, updated for the 2nd edition adventure reprint collection Plundered Vaults and now offered in an expanded director’s cut as the first adventure here.

END_OF_DOCUMENT_TOKEN_TO_BE_REPLACED

WFRP 4th edition is here! As the back cover blurb proudly puts it (beneath the classic tagline of “A Grim World of Perilous Adventure”), “Warhammer Fantasy Roleplay takes you back to the Old World.” Whereas Games Workshop blew up the Old World setting to kick off the Age of Sigmar setting as far as their tabletop wargame offerings go, Cubicle 7’s new edition of WFRP is one of a range of licensed products, including the Total War: Warhammer videogames and Black Library reprints, to have been set in the original Old World setting despite emerging after the Age of Sigmar release. 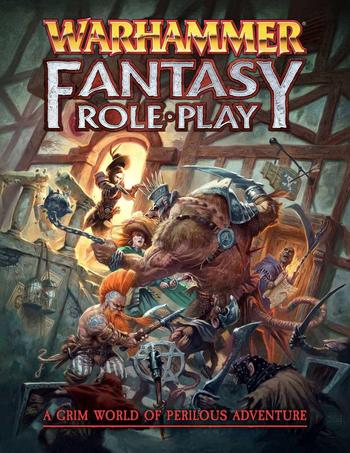 An entirely separate Age of Sigmar RPG, with a different system more suited to the somewhat different style of fantasy that setting lends itself to features, is apparently in the pipeline: WFRP 4th Edition, in contrast, is something of a nostalgia product – Cubicle 7 set themselves the goal of presenting an updated, improved take on the 2nd edition rules but injecting a lot of 1st edition feel and atmosphere, and they pretty much deliver exactly that – right down to the cover art paying tribute to 1st edition’s cover.

END_OF_DOCUMENT_TOKEN_TO_BE_REPLACED

OK; maybe in my previous look at 1st edition WFRP adventures I was a little harsh, though when you’re setting material like the Doomstones nonsense against the excellence of Shadows Over Bögenhafen it can be easy to lose perspective. Having given a second look to some of the material from the period, I think there’s actually more gems from back then than I gave it credit for.

END_OF_DOCUMENT_TOKEN_TO_BE_REPLACED

In both 1st and 2nd edition, some of the most absolutely beloved supplements for WFRP have been big, thick explorations of the unique metaphysic of the Warhammer world. It’s that cosmology, after all, which gives rise to the conventional religions of the setting, the ways of magic, and the forces of Chaos – all three, in fact, are manifestations of the Warp, just as they are in Warhammer 40,000 or Age of Sigmar. A close look at these supplements therefore seems in order if we’re going to hope for suitable sequels for 4th edition.

END_OF_DOCUMENT_TOKEN_TO_BE_REPLACED

The 2nd edition of WFRP had a nice, healthy supplement line, with various types of product there. Some of these were lavish treatments of major aspects of the Warhammer world’s cosmology. Some of these were focused supplements based on various human nations or non-human cultures of the setting. Still others were perhaps less sexy than these items, but at the same time had a seriously utilitarian bent to them which made running or playing WFRP all that much easier. This article is dedicated to the latter.