END_OF_DOCUMENT_TOKEN_TO_BE_REPLACED

Let’s take a look at two trends in geek-adjacent culture in the 1990s: The X-Files was massive on television- a show in which an ensemble of characters in a modern-day setting investigate supernatural gribblies lurking in the shadows – and tabletop RPGs were going through a phase of being very keen on modern-day settings replete with supernatural gribblies lurking in the shadows.

Given that the Lone Gunmen play D&D at one point, it seems likely that the X-Files creative team weren’t ignorant of RPGs, and given that RPG publishers were hog-wild for licencing anything and everything – West End Games made RPGs of Tales From the Crypt, Species and Tank Girl, for crying out loud – so it’s not entirely clear to me why there wasn’t an official licenced X-Files RPG, particularly since Call of Cthulhu‘s perennial popularity proved that investigative RPGs are a viable niche. 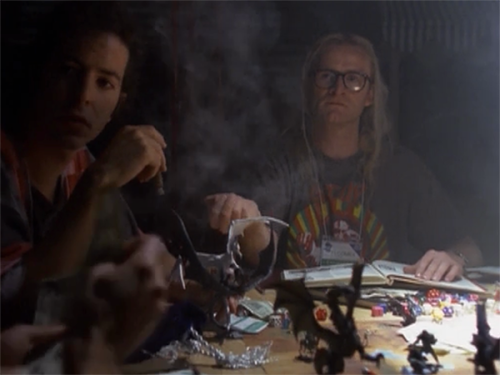 If I had to put a bet on it, however, I’d say it came down to the larger publishers who could have conceivably afforded the licence failing to move quickly enough, by which time smaller publishers proved you could fill the gap without really needing the licence at all. Sure, without the licence they couldn’t use the specific lore and characters of the show – but for the purposes of an RPG where people will likely want to make their own player characters anyhow the characters are less essential, and I’d argue that the background lore of the X-Files is the least valuable part of the IP. The show always got by more on its mysterious atmosphere than it did on the actual answers to those mysteries; so long as you hit something acceptably close to the atmosphere of the show, it’d be good enough for most gamers.

Delta Green, for instance, adeptly recognised that the vein of conspiratorial paranoia and supernatural horror that The X-Files were built on complements the cosmic vertigo that’s the basis of the Cthulhu Mythos (or at least the good bits of it which aren’t based on racism) nicely, and also worked on the basis that if you already have a system which works well for investigative RPGs and can handle a modern day setting, you can do The X-Files in it.

(OK, strictly speaking the earliest Delta Green materials preceded The X-Files – but in practice, that meant Pagan Publishing were perfectly placed to pivot the subsequent material to to cater to the X-Files niche and had the jump on everyone else in that respect.)

And then there was 1996’s Conspiracy X, which, as you might guess from the title, wasn’t exactly shy about what it was trying to do. Whereas the more recent 2nd edition is based off Unisystem – of Witchcraft and All Flesh Must Be Eaten fame – this review’s going to take in the first edition, which had its own bespoke approach.