Penned by Ville Vuorela and put out through his Burger Games small press, Stalker is an officially licensed RPG adaptation of Roadside Picnic by Arkady and Boris Strugatsky, Vuorela having received permission from Boris. Roadside Picnic was, as cinephiles know, adapted for cinema under the Stalker title by Tarkovsky, resulting in one of his greatest accomplishments; the videogame series S.T.A.L.K.E.R., whilst riffing on many of the same themes, was not actually an authorised release. The RPG takes its primary inspiration from Roadside Picnic itself, but has a lot of time for the particular mood and aesthetic of Stalker, whilst not giving much time to S.T.A.L.K.E.R. at all. Released in Vuorela’s native Finland in 2008 and using his Flow system, an English translation was released in 2012. 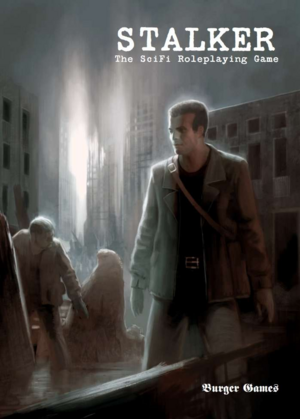 The basic premise is this: at an unspecified point in the future, some sort of extraterrestrial and/or transdimensional event happened to Earth – the Visitation. At six points along the 43rd parallel, at locations in the United States, Canada, France, Russia, China and Japan, mysterious Zones appeared where the Visitation took place. Within the Zones the laws of physics are violated in bizarre, dangerous ways, strange artifacts and monuments with unusual powers can be obtained, terrestrial lifeforms are mutated and altered into strange forms or gain strange powers and various other oddness occurs.