Houses of the Blooded is John Wick’s self-proclaimed attempt at an “anti-D&D” – a fantasy RPG which turns the assumptions of Dungeons & Dragons on its head, so rather than playing a group of rootless mercenaries watching each others’ backs as you seek fame and fortune, you play a clique of well-established inhuman nobles who will gladly shank each other in the name of revenge and romance. (In other words, it’s an attempt to implement on tabletop the sort of action you get in some types of highly political, player-vs.-player-happy LARPs.) 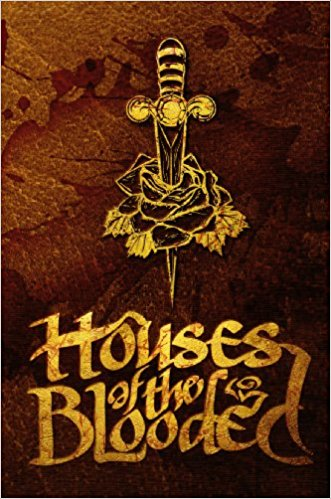 So far, so good. However, there’s two major issues with the core book which make it impossible for me to engage with and invest in the game, despite having given it an honest try in my old Monday evening group. The first is the manner of presentation of the book; the second is the slipshod game mechanics and the way they don’t actually support what Wick wants them to support.