The publication history of WFRP 1st edition materials is pretty wrinkled – a range of products that had been put out under Games Workshop or Flame Publications saw reprints under Hogshead Publishing, but others weren’t – Hogshead opting instead to skim off the cream, leave some perhaps less-than-stellar material behind, and cobble the best bits together in various Apocrypha collections, although ultimately only two were published. 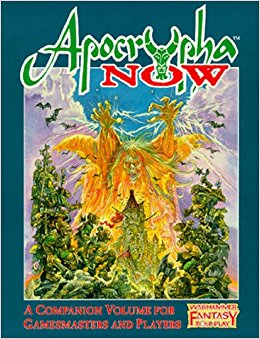 Largely cobbled together out of little articles here and there – some from the pages of White Dwarf magazine, others from previous WFRP releases like The Restless Dead – Apocrypha Now! incorporates useful commentary on and expansion of the 1st edition rules, deeper pointers on roleplaying nonhumans along with some juicy Dwarf, Elf, and Halfling-specific careers (and details on playing Gnomes), and a brace of locations you can drag and drop into your campaign as the situation demands. (This includes two nicely fleshed-out adventures centred on nights at an inn – Night of Blood and A Rough Night at the Three Feathers – which had previously been reprinted in The Restless Dead, though the versions given here thankfully lack the unnecessary clutter of the pointers on how to integrate them into the Enemy Within campaign, or the token effort to turn them into episodes in a campaign spuriously stringing all the adventures in The Restless Dead together.) 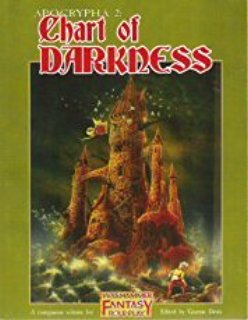 Split between original articles (like some nice in-depth looks at funerary traditions and crime and punishment in the Empire) and reprinted material, this 2000 collection is much in the same vein as the previous one. Between this and the previous one you more or less get all the material worth reprinting from The Restless Dead (without, like I said, the unnecessary clutter of trying to tie them all together into one campaign or The Enemy Within), plus more besides.