Chaosium have gotten around to updating the Malleus Monstrorum. Previously published for the 6th Edition of Call of Cthulhu, having been compiled by Scott David Aniolowski, the original version was an impressively expansive book crammed with stats culled from publications of the whole of the game’s history, both of full-blown Mythos deities and of the various gribbly monsters that fill out the intervening parts of the food chain between the Old Ones and humans.

Naturally, the new revision entails updating the presentation to the new higher standards Chaosium have adopted for 7th Edition, and the book is both very nicely presented and substantially better laid out than the original. In addition, it is now divided into two volumes – one for monsters, creatures of folklore, and conventional animals, and one for Mythos deities. 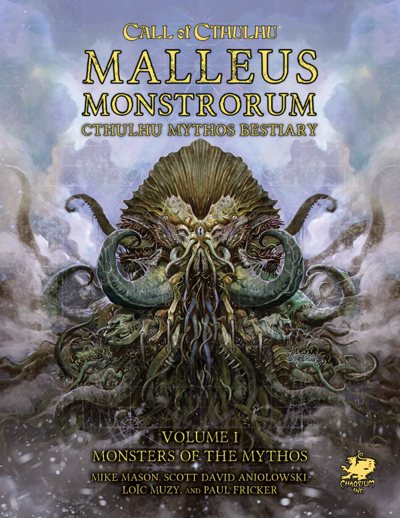 Whilst some might regard this as a price gouge – selling two books where previously they’d only sold one – I actually think the division is extremely sensible, because it emphasises that you are going to get very, very different uses out of the different halves of the Malleus. In effect, volume 1 is now devoted to detailing creatures which you might consider throwing into a Call of Cthulhu scenario for the PCs to directly encounter, volume 2 is now a catalogue of entities whose direct appearance is probably a campaign-ending moment, but which will more typically have an indirect effect via humans and aliens who worship them or otherwise interact with them in inadvisable ways.

This approach goes further than splitting the book in two. Whilst the stat blocks for stuff like Mi-Go and Shoggoths are, as usual, intended to be taken as a measure of the actual physical capabilities of the entities in question, all the Mythos deity stat blocks are designated as being for “typical physical manifestations” – in other words, it’s down to the Keeper to decide whether the Old Ones are actually physical flesh-and-blood entities at all, or merely manifest such under particular circumstances, or whether physical manifestation even happens at all.

In the preamble to the deities listing, it is explained that these stats are provided primarily as an inspirational aid to the Keeper and a tool for comparison, and that it is expected that you’d never actually need to use the actual listed stats to any great extent in actual play. I think the idea is that if you are coming up with a backstory myth to drive a scenario it might be interesting to know, say, if Cthulhu is stronger than Tsathoggua, or whether Hastur is smarter than Nyarlathotep.

One might question whether it was worth just stripping all the deity stats altogether – after all, the Delta Green RPG largely does without them, as does Trail of Cthulhu. However, I think there’s legitimate reasons to retain them beyond them being a legacy feature of Call of Cthulhu. Ultimately, the whole point to these tweaks to the interpretation is to allow for a range of different interpretations, ranging from highly purist gods-don’t-need-stats approaches to a more pulpy style (especially if supported by the Pulp Cthulhu supplement) where if having the PCs try to get Cthulhu’s attention with an artillery barrage is your thing, you’re happy to have at it and roll some dice to see if Cthulhu’s slowed down any by it. (As the book reminds us, the original Call of Cthulhu story includes someone trying to bonk Cthulhu on the head with a boat.)

In keeping with the general tendency to allow for Keepers to use their own personal interpretation of the Mythos, 7th Edition has tended to shift away from fine categorisation of creatures into “Servitor Races” and “Independent Races” and so on, and puts less weight on deity categorisations, but the Malleus offers listings for those who wish to use such things.

Beyond the stat blocks, the entries for both monsters and deities have been fleshed out a little more. Everything now has an “alternate names” box associated with it, which is helpful if you want to think up different terms characters might use to allude to these things in handouts. As well as the “Cults” section describing how the various deities’ worshippers operate, which the previous version also had, this version introduces the idea of “example blessings” – little abilities, mutations, or other enhancements/afflictions provided by the deity to those who please it (or are exposed to its influence). They are also provided with ideas for what encounters with them might go like, and the “aura” or general atmosphere evoked by their presence. 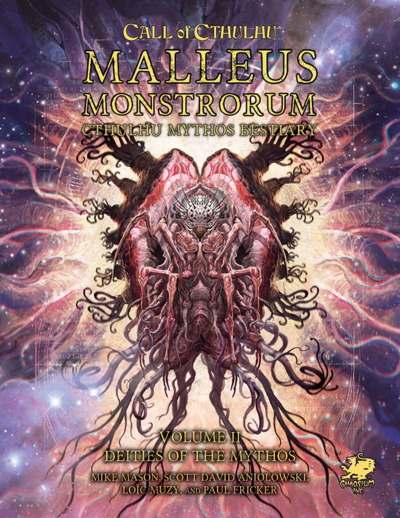 That said, the new Malleus doesn’t reproduce every single entry from the previous edition. In fact, I was able to identify a number of categories of entries that have been outright cut. In some cases, I suspect this is because it was decided the original concepts were just plain goofy, and not really appropriate for the RPG at all; I don’t think anyone really likes the idea of Kthanid, Cthulhu’s goody-two-shoes brother, as found in Brian Lumley’s Mythos stories, and I don’t think anyone’s going to mourn him being left out here.

Some other creatures seem to have been left out because in their original iteration they were simply kind of underbaked, and there wasn’t really enough to go on to flesh them out into an actually useful concept to use in actual play. M’nagalah, for instance, in a Cthulhu Mythos context only really shows up as a brief passing reference in a Ramsey Campbell story. (It’s been used more extensively in Swamp Thing comics, but just because a thing borrows from the Mythos doesn’t mean it is subsumed into the Mythos.)

The original M’nagalah entry in the 6th Edition Malleus is near-useless, beyond specifying that it’s a big tentacle-y thing and it has no known Earthly worshippers; it is spectacularly pointless and I cannot imagine anyone actually building a scenario around the concept as presented in that entry, and I guess Chaosium ultimately felt the same way about it – and about a clutch of other deities where the information is just “they have a weird name and they are not worshipped on Earth and don’t really care about Earth and probably won’t go to Earth” or words to similar effect.

The Swamp Thing connection reminds me of another category of omissions, which is creatures from non-Mythos sources. H.G. Wells-style Martians and the creature from The Thing got detailed in the 6th Edition book, which also used xenomorphs from Alien as an example of how to design monster stats. Whilst the book still provides stats for classic folklore monsters, the emphasis seems to be to focus on Cthulhu Mythos monsters (some of the more niche stats for ordinary animals are trimmed back too for that matter), so this makes a certain amount of sense. (There may also be a desire to not get too cheeky with other people’s IP – I don’t think the 6th Edition credited The Thing or the original John Campbell short story, for instance.) Other omissions may have been carried out on grounds of redundancy – who really needs separate entries for Serpent People and Reptile People if the latter are basically “Serpent People but less snake-y and more reptile-y”?

The most significant omissions, however, are creatures and deities which are primarily associated with the Dreamlands – this is particularly evident on the deity side of the equation in particular, where most entities formerly designated as “Great Ones” (being the deities of the Dreamlands close to and widely worshipped and honoured by humans – in other words, puny little godlings who get kicked around by Nyarlathotep for sport) are gone.

I suspect this comes from an understanding that the Dreamlands are a bit of a love-it-or-hate-it ingredient of the setting, and as part of the desire to make sure that the books are mostly applicable to the vast majority of Call of Cthulhu campaigns without including a bunch of niche stuff. I also think that it’s likely that some kind of 7th Edition take on the old Dreamlands supplement is coming down the pipeline, and a lot of that content is being saved for that, where you’d have the Dreamlands-related framework to actually make proper use of them. (Doing the comparison between the two books, I was also struck by just how many Great Ones are basically completely interchangeable and pointless.)

Some of the entries have also been edited for the better. In my review of the original Malleus, I griped about how there was really no need for the green flame the narrator sees in the distance in Lovecraft’s The Festival to be an actual Mythos deity, it could just be part of the strange landscape he’s in; the shift in the description of the entity in question does a better job of making it seem like an entity which you could meaningfully use in the game, and pivots away from making it obviously and unambiguously the green flame from that story.

On a more serious level, some of the more unfortunate entries have been tweaked in beneficial ways. The “Wendigo” entry is now a “Wind-Walker” entry with a sidebar about how the concept kind of plays on the relevant bits of folklore but is rather distinct from it and not an accurate reflection of it, for instance, and Baron Samedi is not listed as a mask of Nyarlathotep because actually turning a significant figure from a religion primarily originating in the experiences of enslaved populations of black people into yet another disguise of the Ultimate Evil is kind of terrible.

Likewise, the shift in the depiction of the Tcho-Tcho I’d first noted in Petersen’s Abominations has now been enshrined here. This is the concept that “Tcho-Tcho” does not refer to any one specifically identifiable ethnicity, so much as describing a type of influence that long-term exposure to the Old Ones can work on isolated populations, such that “Tcho-Tcho”-type peoples can be found the world over and the designation is not so much about race or ethnicity and more about embracing the service of the Old Ones. This is a substantial improvement; though it shifts away from August Derleth’s original conception, it can also be seen as fitting in with, say, the activities of the Delapoer family in England in Lovecraft’s The Rats In the Walls, and it is a neat way of making the concept less inherently problematic without outright invalidating any previous scenarios using them.

This new edition of the Malleus has pivoted away from the completism of the original version and more towards a focus on producing a useful tool for referees and scenario designers; by trimming away entries which just aren’t that useful (or would work better in a Dreamlands supplement), they are able to provide not just a better presentation but also improve on the entries that are left – adding more meat both to old standards and significant improvements to entries which had some potential in the older version but needed a little more love to really become useful.

I suspect I will not be holding onto my old copy of the 6th Edition version – I can’t see myself making much use of the entries from there that are missing from here, and on the whole this new 7th Edition version of the Malleus is a substantial improvement to what was already a very good book.

3 thoughts on “A Bestiary Refined”