As well as putting out the initial releases in their Enemy Within reissue, Cubicle 7 have also put out a couple of fresh new products for 4th edition WFRP lately: here’s an overview. 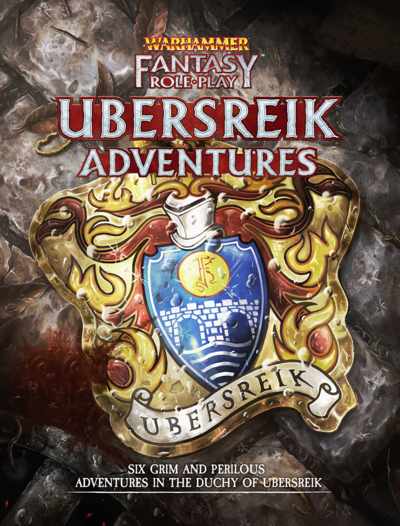 Around the release of 4th edition WFRP, Cubicle 7 put out a bunch of PDF-only adventures on DriveThruRPG set around Ubersreik, the city that the Starter Set is based in. This seemed like a good deal for everyone; from Cubicle 7’s perspective, it’s another chance to sell old timers on the Starter Set for the sake of the Guide To Ubersreik booklet in there, for beginners who’ve played the Starter Set it’s a neat source of additional support, and for old hands it’s some fresh WFRP material that ties in nicely with the new Ubersreik-based plot and isn’t just a revision of stuff they already own. Everyone wins.

Cubicle 7 hadn’t been planning to do hard copies of the material, but there was enough demand to issue this compilation of the five adventures (plus a new sixth one). The artwork in the book tends towards simple black and white pieces in comparison to the more lush artwork of, say, Empire In Flames or the core book, but this is largely down to the status of this book as an unplanned compilation.

If Looks Could Kill is an adventure where the characters are hired on to help out in a troubled attempt to build a mill. The adventure includes a significant Strigany presence; in previous editions of WFRP and Warhammer Fantasy Battle, these have been cast in roles much like Ravenloft‘s Vistani – in other words, racist Romani stereotypes tied in with vampires.

The presentation here is substantially improved; they’re still Romani transferred to the Warhammer world, but that makes sense for a setting which offers a funhouse mirror version of a range of European cultures of the era, and the Strigany you interact with here nothing to do with vampire nonsense, and are sympathetically presented. In particular, their superstitions about curses and monsters in the marsh are not unique to them – the local villagers have the same beliefs – and whilst there is an elderly mystic among them, she’s presented less in the classic “fortune teller” mode and is more just a very knowledgeable and wise old lady who happens to have visions, which may be supernatural or a symptom of aging as the referee decides.

The Mad Men of Gotheim has the characters swinging by the titular village in the wake of a terrible monster attack by a creature whose aura causes madness in those unfortunate enough to be in proximity to it. It’s an interesting concept, but I can’t shake the feeling that most PC parties would be fools to try and resolve this situation. This is exacerbated by the way that each NPC has one and only one way in which they can be brought to their senses – it’s different for each one, and there doesn’t seem to be any good way of guessing what techniques work for who.

Heart of Glass offers a murder mystery which finds the PCs embroiled in the affairs of various factions, and plays on the rivalry between local Ubersreik loyalists and the occupying Altdorf forces. Slaughter In Spittlefeld is also an investigative piece, this time unfolding within the narrow confines of a single tenement building under quarantine. Heart of Glass is a bit more expansive – it’s the longest scenario in the book – whilst Spittlefeld is tight and compact, and could easily be dealt with in a single session. Bait and Witch is another brief adventure – really an extended encounter – in which a simple favour requested by someone the PCs meet ends up having further wrinkles, and could usefully be dropped into the middle of any adventure if you decide a bit more violence is wanted.

Finally, The Guilty Party is designed to offer a way for characters to burn some bridges in Ubersreik and get out the road to Altdorf – allowing a smooth transition into Enemy In Shadows, if you intend to run that. I think it could have done with a few more notes on how to work some of its significant NPCs into the action of Enemy In Shadows, but otherwise it gets the job done.

Each of the adventures has an accompanying section at the end suggesting ways of switching things up or adapting them, which is a useful way of increasing the potential utility of the material. A nice feature of this is the It’s All Connected! boxes, which offer suggestions of how the events of each adventure could be interwoven with or lead into or emerge from other adventures, both here and in other sources like The Enemy Within.

On the whole, these Ubersreik Adventures are a welcome sign that Cubicle 7 is committed to providing shiny new material to play with as well as polishing up old favourites. A second adventure series, to be compiled in a second book, is already underway – and this time we’re promised guidelines on how to develop the Ubersreik plot in your own campaign, and how the final outcome might impact the state of affairs in the Enemy Within campaign. 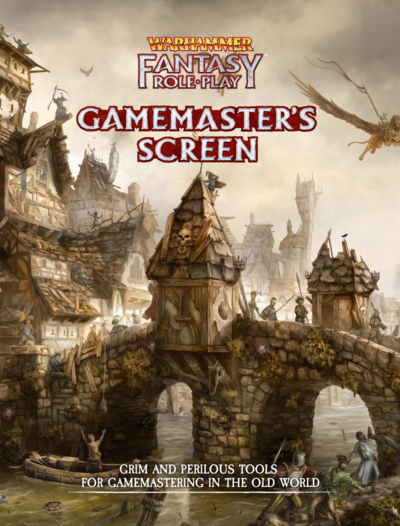 The screen itself loses points for having portrait-orientation panels instead of landscape orientation, but the picture on the screen is gorgeous anyway. The accompanying booklet has some very useful advice – a rundown of the GM’s goals and agenda of the sort more typically found in Powered By the Apocalypse games and a discussion of WFRP‘s themes similar to the theme notes in any World of Darkness/Chronicles of Darkness book, all of which provide useful insights, along with suggestions for getting the most out of the system.

In particular, there’s some welcome guidance on the Advantage system in combat – tracking it, handling it in combats with lots of participants, and advice on how to handle a situation when one side ends up with a major Advantage lead over the other. Since Advantage seems to be one of the more Marmitey bits of the new system, these new suggestions may be helpful for groups struggling with it.

2 thoughts on “WFRP: Stepping Past the Starter Set”