To say that Dungeons & Dragons traditionally uses “Vancian spellcasting” – in which spells are memorised, and then forgotten when cast – accurately identifies the inspiration for the magic system but mischaracterises Vance’s own work. The fact is that the method of spellcasting in question appeared more or less only once, in a single story in a much longer series in which various other forms of magic also appeared, and with much more flavour. The Dying Earth sequence, despite some problematic elements, remains one of my favourite mid-20th Century fantasy series, mashing up as it does classic sword and sorcery, a poetic temperament worthy of a Lord Dunsany or Clark Ashton Smith, and a wry picaresque sense of humour. Although Dungeons & Dragons nails the sword and sorcery style, it’s never really delivered on any of the rest, and so its take on what is “Vancian” is necessarily limited.

Thankfully, Pelgrane Press – named for a flying beast from the series – made their grand debut in 2001 with The Dying Earth, easily the best and most innovative fantasy RPG of the early 2000s. (Apparently John Tweet and Monte Cook put out some sort of early prototype version of Pathfinder the previous year, but I don’t recall it being especially fun.) 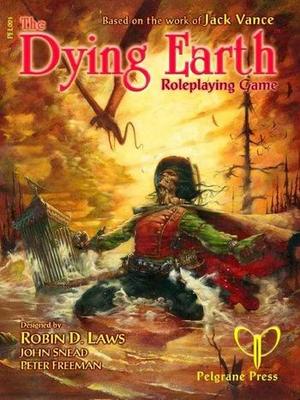 Primarily designed by Robin Laws (with John Snead working out the magic system, which adds back in all the flavour that Dungeons & Dragons took out of it), The Dying Earth RPG pioneers a number of concepts which Laws would later incorporate into GUMSHOE – specifically the way character abilities are tied to pools, and the way those pools don’t represent a direct bonus to dice rolls so much as opportunities to spend points (or not) to gain victory.

The major difference is that whereas in GUMSHOE you spend points from a pool to add directly to the die roll, in The Dying Earth you spend points to prompt rerolls – and whenever you roll it’s basically a slightly more ornate coin toss (with 1-3 on a D6 corresponding to varying levels of failure, and 4-6 to varying levels of success). This is very much in keeping with the styles of the novels, in which dramatic reversals of fortune are common; characters must choose when it’s truly important to them to defy the dice and spend points to bully fate, and when to go with the flow and accept a setback.

Indeed, the game goes to great lengths to promote the idea that players should embrace failure, accepting it not as a derailing of the adventure or the destruction of their ambitions so much as it’s a complication from which the reversals and drama of the game arises. This is the sort of thing which, through game mechanics like compelling Aspects in FATE (by which I mean FUDGE Adventures in Tabletop Entertainment, by which I mean Freeform Universal Donated Gaming Engine Adventures in Tabletop Entertainment), has now become common currency among gamers, but back in 2001 this was radical stuff, even as far as arthouse indie-type games went.

Laws puts much design energy into encouraging this acceptance. If you get a critical fail on a roll by rolling a 1, or your opponent gets a critical success by rolling a 6, the cost to prompt a reroll is quite high (3 points instead of 1); in a highly-recommended “purist” take on the rules you can’t even reroll them, with such rolls having to be accepted as they happen. (I would be inclined to adopt that in part to help speed the game up.) The game also takes the unusual step of making PCs equally vulnerable to persuasion attempts as NPCs. In fact, in keeping with the books, verbal persuasion, duping, conning, flim-flammery and fast talking is a major component of the game; everyone has their distinct style of attempting it and defending against it, which also gives certain additional bonuses. The game goes out of its way to encourage you to accept it and roll with it when your character gets persuaded, as well as suggesting how you might rationalise being persuaded to yourself depending on the style of the person who’s persuaded you.

Another way in which the game encourages behaviour suitable to the characters of the books – who tend to go in for enjoying life’s little luxuries in the moment rather than undertaking especially long-ranging quests or projects – is the game mechanic for refreshing pools. Whilst optional rules are provided to allow for refreshes after a certain amount of time elapses, as in GUMSHOE, one is encouraged to use the various means of refreshing the pools for abilities given in the book. This generally involves drinking in life’s little luxuries, and as such will help prompt players to play PCs in keeping with Cugel, Turjan or Rhialto from Vance’s own stories, who each at their own tier of activity tend to be out for leisure – where major quests happen or the day happens to be saved, it’s usually a terrible bother rather than something they actively seek out.

Cugel, Turjan and Rhialto actually each give their names to the different tiers of gameplay. Cugel-level play casts the players at the lower end of society – rogues who, if they get into magic, are mere dabblers at best. At Turjan-level play, characters tend to be more competent and those who invest in magic can engage in activities like establishing their own manses and designing new spells and magic items. (For action more in keeping with the sword-and-sorcery leaning early Dying Earth stories, as opposed to the more picaresque action of the later saga, the GM’s section includes optional guidelines for drifting the Dying Earth system in a more traditional direction; this would be particularly appropriate for Turjan-level play.) At the level of the arch-mage Rhialto, characters are extremely competent, with the arch-mages among them being able to summon and command the majestic sandestins and through them accomplish magics beyond that of any inferior tier.

All told, the Dying Earth RPG brilliantly captures the tone and style of the original Jack Vance stories, and teases out the game potential in them nicely. Although it came out in the immediate wake of 3rd edition Dungeons & Dragons, for me I’d say it’s the most important fantasy RPG of the early 2000s; 3.X D&D‘s era has come and gone, its excesses increasingly set aside in the wake of 5E (see how even Pathfinder is adopting some 5Eisms for its 2nd edition), but The Dying Earth remains a game design landmark and a system which is uniquely suited to a style of fantasy which, whilst a feature of the genre for decades, is poorly served by the underlying assumptions of Dungeons & Dragons and its major competitors.

The Compendium of Universal Knowledge 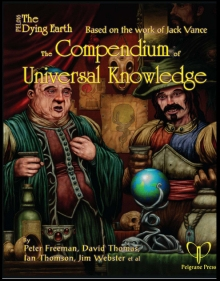 This is a setting encyclopedia, with each entry neatly divided into a statement of the canonical information provided in Vance’s novels on a subject and opinions offered by the sentient book itself on the subject. New spells, creatures, and NPCs are statted up here and there, and an expansive set of indices by subject allow you to find such things quickly when you have a mind to. Not essential to play by any means, but an extremely useful source of inspiration and setting information nonetheless, regardless of the tier at which play takes place or the region of the setting the action occurs in. 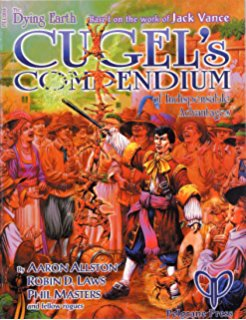 As the title implies, the material here is most suitable to Cugel-level games, though some bits and pieces can be incorporated into higher-tier play. Mostly it’s a grab-bag of extra stuff – new gear (including a fantastic random costume generator with masses of amusing tables), new magic, and Tweaks – little tricks you can buy that are associated with your skills and allow for special advantage under certain very defined circumstances. The page count is rounded out with discussions of negotiation in the Vancian style, and in the art of the confidence trick.

Turjan’s Tome of Beauty and Horror 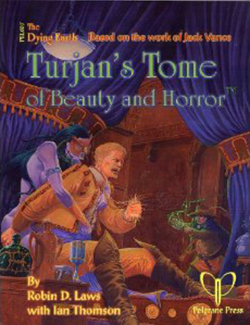 Offers much the same as Cugel’s Compendium but for Turjan-level play, along with an extended discussion on how to adapt the game for the more Clark Ashton Smith-derived tone of the original 1950 stories. 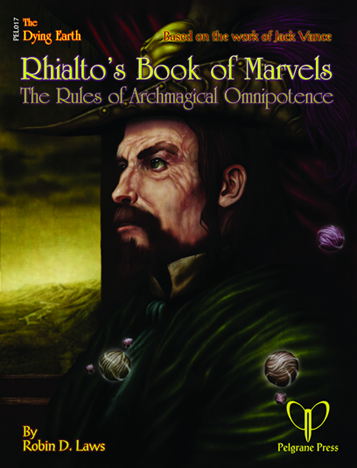 Here we have the Rhialto-tier equivalent, and out of all three books its job is the hardest. Cugel-tier play, unusual though it is as far as typical games go, is extensively supported already by the core Dying Earth rulebook; Turjan-tier activities drift closer to more familiar turf anyway. However, aside from basic guidelines on the care and deployment of sandestins, the distinctive activities of the arch-mages don’t really get described at all well by the core book.

For the most part, this supplement rectifies the matter, describing a competitive mode of play in which PCs eternally bicker for status within the Conclave of Ildefonse; adventures boil down less to how an obstacle will be overcome and become more about who will get the glory of overcoming them, and extensive systems are provided for adjudication of this matter. The structure of the conclave and its proceedings is also described, and an entirely novel conception – the “Arch-Warrior” – is provided as a security blanket for players who absolutely, positively do not want to play an arch-mage (though since the distinction is largely cosmetic I’d argue that if you don’t want to play an arch-mage, you shouldn’t be playing a Rhialto-tier Dying Earth game anyway).

One thing Laws does do is assume that the stultifying sexism of the conclave as depicted in Rhialto the Marvellous is in place. Laws chooses to interpret the book as satirising this sexism rather than merely wallowing in it; I am inclined to disagree, though he does have the decency to suggest how you might change it up to admit women but still leave it with a cadre of opponents in the niche of its opposing witches in the source material. 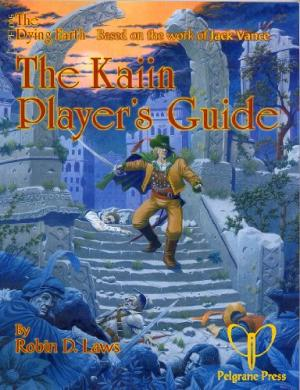 This guide to the city of Kaiin is player-oriented, but there is no GM-facing equivalent of it; instead, the idea is that by reviewing the book (which presents the understanding of the city the player characters would have picked up by living there for a while) the PCs can choose what matters to investigate, locations to visit, or personages to make the acquaintance of, and the GM can then improvise from there.

This is an inversion of the usual philosophy of setting documents, in which they are meant to provide a “canonical” set of information for referees to dripfeed to their players, but it’s one which understands the difference in narrative power in traditional RPGs: the referee can make new setting material out of thin air for the purposes of their campaign, simply by declaring that a certain thing exists, whereas when players do the same the sense of immersion can be loosened and one risks the shallowness of a world created by committee. In essence, the book provides players with a pre-vetted set of prompts they can toss at the referee, which the referee can work into their own conception of the Dying Earth as they wish. The end result is highly useful.

2 thoughts on “The True Vancian Magic”