What the higgedy-heck is it with Scottish RPG publishers and their quixotic attempts to make a splash in the industry by debuting with hyper-weird RPG settings explored through basically traditional RPG formats? There was Nightfall Games with SLA Industries, a game which never managed to get really hot but somehow never quite seems to die; then there was Sanctuary Games with Tales of Gargentihr, which seems to have slipped out with almost nobody noticing and disappearing without a trace.

Then, in the 2000s, there was Contested Ground Studios, which was mostly Malcolm Craig (now an academic who has left his RPG publishing career behind) and buddies. They’re the odd group out in this trio because they actually ended up producing other RPGs subsequent to their debut game – indeed, they are mostly known for the Cold City/Hot War duology of indie RPGs set in a weird occult take on the Cold War (or World War III). But their first RPG, a/state, absolutely and 100% fits the model of Scottish publishers going really high-concept with their settings (and making them somewhat grim and grimy whilst they’re at it). As far as the success of such settings goes, a/state sits somewhere between Gargentihr and SLA; like SLA Industries and unlike Tales, it had a few supplements produced for it, but like Gargentihr and unlike SLA it sank into obscurity, never got republished, and is basically no longer even a blip on the radar as far as general availability goes. (It’s up on DriveThruRPG, but so far as I can tell Malcolm Craig doesn’t intend to do anything in terms of active promotion or continued development of the line.)

I think I might be one of the few people who, once upon a time, ran a short a/state campaign, having been attracted to it because it’d also done a somewhat pretentiously weird-for-weird’s-sake RPG setting for Oxford University RPGSoc’s weekly freeform LARP and I’d picked up a/state out of curiosity concerning how they handled that sort of game. Whether I’d ever run a second game, now that the novelty of the setting has worn off somewhat… well, let’s think on that. 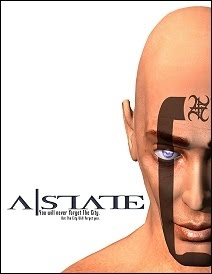 The core a/state book itself presents the setting as a maddening Rorschach test. Nearly a thousand years ago some disaster of cosmological importance left the people of the City trapped within its borders, unable to leave. A very few extremely powerful economic blocs – the macrocorporations – are able to send robot mining equipment out of the City to collect vital resources that allow the system to keep going, though the equipment is only safe so long as it does not leave the surface; there is no contact with any other human community.

Beyond that, there’s hints that there’s something outright supernatural about what has happened to the City; in particular, the existence of the Shifted, who range from “creepy automata with decaying human heads balanced on them” to “squads of Slendermen doing Dark City cosplay”, as well as segments of the City which seem to become spooky enclosed little pocket dimensions and are maddeningly difficult to exit once you enter them, seems to hint at something far weirder going on than just “We’re all stuck under a force field”.

Unfortunately, the book plays its cards intensely close to its chest. So far as I can tell, Craig/Contested Ground had ambitions of giving a/state the ol’ White Wolfy metaplot treatment. The back of the book lists about 9 supplements planned for the game (of which only two ever saw the light of day), because Contested Ground had extraordinarily overambitious plans for a small press RPG publisher; one of them was The Once Before, a campaign adventure that promised to take the players into the heart of the City’s mysteries. After Contested Ground sobered up and enjoyed a fat dose of subdued expectations, Malcolm Craig had talked about publishing some of his notes on his own, particular take on the secrets behind the setting, but so far as I can tell he never got around to doing it.

Now, in some respects that’s nice. One of the biggest disasters to befall SLA Industries was the leaking of its “setting Bible” which gave a version of “the Truth” behind the setting; though as I understand it “the Truth” is no longer canonical, it came across poorly enough that it impacted a lot of people’s view of the setting. Similarly, I’ve gone on record before as saying that it might be a good thing that Tales of Gargentihr didn’t get further supplements, because it means that each group who tackles the game can develop their own take on it.

The problem is that whilst the mysteries of Gargentihr are substantial enough to be evocative whilst still mysterious enough that there’s any number of potential explanations, the mysteries of a/state are not plumbed anywhere near deeply enough in the core to provide much for referees seeking to construct their own version of the truth to build on. The book doesn’t even provide stats for the Shifted, in fact – which means that in effect it offers no game mechanical support for meaningfully interacting with them at all.

That’s why I say the game is a Rorschach test – it’s a sketch of something which looks like it might be meaningful, but if you want to actually extract something substantive out of it you’ll basically have to make that up yourself and force the faint inkblots here to fit the pattern you’ve chosen. Sure, the book provides a bunch of locales and NPCs and organisations to encounter, which means you can support a fair amount of sandboxy wandering about, but none of it means very much unless you have a handle on why they are here, what’s keeping them in the City, what the whole enigmatic purpose of it all is.

The major mysteries of the setting are so bizarre, and overshadow so much, that it’s impossible to see any other aspect of the setting – whether it’s the struggles of the impoverished or the clashes of the corporations – as being anything other than a sideshow; I simply cannot imagine an a/state campaign which didn’t sooner or later find the PCs becoming extremely curious about the setting’s central mysteries, unless the referee had outright failed to communicate the distinctive features of the setting to the players in the first place. The fact that the core book does not in any way equip the referee to handle such direct investigation, and leaves you completely on your own, feels like a major game design failure to me – an abdication from providing a central supporting pillar of the setting.

Beyond that, the book isn’t exactly an inspiring document. The system provided is a percentile-based mess, clearly written just because Contested Ground were caught up with the idea of putting out a Proper RPG in hardback with its own system and everything; had they just put it out as a system-agnostic rulebook, or used some appropriate OGL arrangement to put it out under a suitable system, that would have been much more within their means. Their pretensions of being able to compete with the big boys shatters once you look at the interior art, which is by and large horribly dated 3D stuff which looks like it was done in Poser. This looked awful even during that brief period in the mid-2000s when people were kidding themselves into thinking that was an acceptable practice, and they have not aged at all well; indeed, some pieces are very obviously printed at the wrong aspect ratio, stretching them out absurdly.

Still, I do have fond memories of the one a/state campaign I ran, and the book’s description of the setting really is good for sandbox exploration of it. (I went with the ol’ “you’re all amnesiacs” schtick so the players could enjoy discovering the setting’s weirdness bit by bit, which advantageously meant that none of them had to read the core rulebook; one wonders whether their expectations of the campaign would have been radically lowered had they given it a perusal.) The thing is, I liked that campaign largely because of the people who were in it, and the participants seemed to like it largely because of the wild explanation I gave the mysteries; whilst useful for facilitation purposes, a/state didn’t do that much in system or setting terms directly which made us sit up and go “wow”. 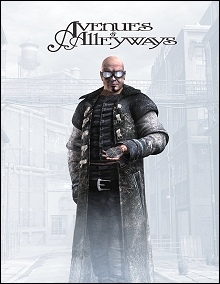 This is largely an embellishment on the locations and people chapters in the core book, enriching the setting by littering additional places and folk across a great swathe of the City. For the purposes of running a sandboxy game in the City, it’s a handy tool in fleshing it all out. If you actually wanted deeper insight into the City’s mysteries, you won’t get it here (or anywhere), mind – it’s the sort of supplement that adds breadth, not depth.

The Lostfinders’ Guide to Mire End 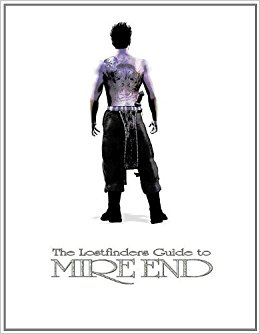 The only one of the district-specific supplements for the game takes a different approach by, obviously, zooming in on one district. This was actually the first supplement published for the game, and was extremely useful to me for the purposes of running my own a/state campaign, since the close focus on a single district means that Craig can provide enough locations and people with sufficient density to resemble an actual community. It was then simplicity itself to insert the PCs into that community, get them invested in it, and then make a campaign about resolving its particular problems.

It’s on this scale that you start seeing scope for an a/state game which isn’t solely about resolving the major mysteries of the setting (though it’s hard to ignore them when so much of the community’s deprivation is contributed to by them). Indeed, were there ever to be a second edition of a/state (though I have profound doubts as to whether that will ever occur), I’d advocate including this as a chapter in it, purely for the sake of having an assumed campaign start point and a viable street-level game setting right in the core book.

2 thoughts on “A Refereeing Rorschach Test”