I’ve previously talked about my enjoyment of Knights of the Dinner Table and how the dysfunctional gaming depicted in its pages can offer a range of interesting lessons you can apply to real gaming – so why not continue that? This time around I am going to start going through the various Bundles of Trouble – the collections they do of the strips from the main Knights of the Dinner Table comic book (which has gone from being a thing which Jolly did as a fun tie-in to becoming the main focus of Knight-related creative efforts, particularly since Kenzer & Company stopped producing strips for other people’s magazines). 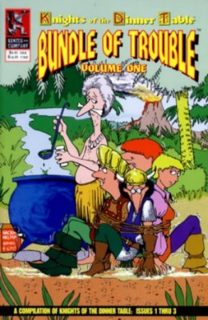 This collects the first clutch of comics that Blackburn essentially wrote by himself and put out in 1994-1995 before he joined up with Kenzer & Company. It’s consequently a simple affair, with the characters not yet especially rounded out, but it does contain the classic Gazebo strip – in which the party of Bob, Dave and Brian (Sara having not been added to the strip yet) attack and “kill” a perfectly innocent bit of garden architecture because they don’t recognise the word and assume it refers to a monster.

It’s this strip that really encapsulates one of the key jokes which Knights of the Dinner Table keeps coming back to, which is also one of the key lessons it has to offer; namely, that tabletop RPGs are an exercise in communication, and if you miscommunicate as a result of assumptions, expectations, or life experiences you don’t share then your game session will descend into absurdity. That absurdity is great to observe from outside for comedy purposes, but frustrating to play through yourself. 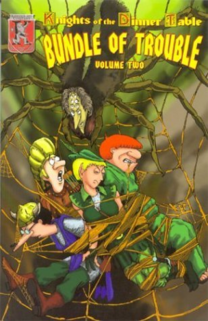 This has the first issues that came out through Kenzer & Company in 1997, and so benefits from Jolly getting a whole team of pals to help him tune up the scripts. The lesson from that is that a group on the ball will be able to think up stuff that no individual member would be able to come up with by themselves – which is part of why we play RPGs as a group activity, I suppose.

Noteworthy strips include a jaunt into Spacehack (a parody of Traveller with perhaps a pinch of Prime Directive), in which B.A. regularly falls foul both of his shoddy command of the setting’s invented technology and of actual science. (He isn’t aware that water has hydrogen in it, for instance.) This is actually an interesting illustration of a contrast between fantasy and SF: in a fantasy context people are generally much more willing to say “your world, your rules”, whereas in a science fiction context you really want to make a call on the “hardness” of the science – and if you go for a hard SF approach (as Traveller shows tendencies to), then your capacity as a GM to just ignore reality in order to come up with imaginative fun is going to be curtailed by the implied agreement that you’re trying for scientific accuracy and plausibility. 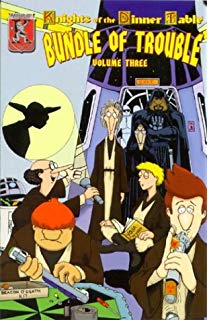 Sara’s characterisation here starts being fleshed out more when she starts being less of a passive spectator to the horrible things the other players get up to in the game – there’s multiple times this issue where she not only speaks up for but actively helps out NPCs instead of the player characters. By the end of the compilation she even seems to have succeeded at shifting the group’s culture a little – Brian playing a Cattlepunk character whose schemes, whilst they involve OOC cheating in the form of using knowledge his PC couldn’t possibly possess, do at least require him to engage constructively with NPCs. (In another story, even Bob and Dave come around to the idea of having hirelings and servants around if it means they can zerg rush the opposition.)

There’s several lessons to learn here. The first is that you know you’ve really excelled at presenting a sympathetic NPC when players start seriously considering siding with them against the party. The second is that you can’t change a gaming group culture’s overnight – and whatever new approach you contribute to it is likely to be coloured by the group’s existing prejudices. The third and greatest one is that B.A. is an absolutely terrible referee – any GM worth their salt would have flat-out declared that Brian’s PC couldn’t take the actions he took because it required him to have knowledge he didn’t possess in-character – or invoke a referee’s right to amend the secrets and mysteries of a campaign setting and change up where all the gold deposits are, so that Brian’s land purchases become worthless. As it stands, lying down and allowing Brian to act in a way fundamentally against the basic social contract of traditional RPGs is the worst possible option. 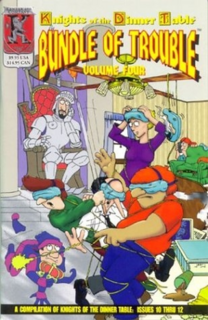 This includes a story that has Sara taking on GM duties to playtest an adventure she’s written, and assigning a set of female pregenerated characters to the players. The end result is a disaster, with the players turning tricks for experience points in defiance of character alignment or rebelling against the concept altogether until they are able to find a way to switch their character’s gender.

It’s an ugly picture it paints, but given the eruption of gamer misogyny surrounding Gamergate it’s hard to argue that there isn’t a subset of gamer guys who have really odd ideas about women, and for the most part I’m willing to read the story as a biting satire. When writing a comic for a subculture about that subculture, the temptation to slide into flattery and pandering is probably always there – look at how many gamer webcomics descend into Ctrl-Alt-Del-esque smug self-congratulation. One of the things that’s laudable about Knights of the Dinner Table is that it’s always balanced its celebration of gamer culture with a certain amount of cutting insight and criticism.

There’s also a more general lesson to take from the story in question: if someone plays a character with aspects of identity or personality they don’t personally possess, and they haven’t been provided with a really detailed set of guidance on how to handle that angle, then to the extent they engage with that characteristic they will do so based on their assumptions about what people with that characteristic are like. They might not engage at all, of course – but if they do address that aspect of their character, odds are you’re going to see any prejudices or baggage they’ve got on the subject aired for all to see.

That said, the story isn’t perfect by modern standards. At the end of the story the other Knights get freaked out when Bob decides he likes his female character as she is and doesn’t want to turn her into a man; in a bonus strip in this Bundle Sara kills off “Bobarello” because she’s disturbed by how Bob talks about the character’s fashion accessories.

If you’re feeling very, very generous, you could read this as a magical realm thing – the idea being that Bob is getting off on this to an extent that the other people at the table aren’t comfortable with being dragged into; certainly, having a tabletop game get hijacked to pander to someone’s fetish without the mutual consent of all participants is a shitty thing to happen.

However, in context it reads as being simply transphobic, or maybe just dudes-showing-an-interest-in-feminine-things-phobic. The mention of Gordo’s pixie-fairy character – the first time the subject comes up in the comic – only emphasises this in context. Again, when we actually see Gordo in action with the Black Hands in later issues we’ll see that he plays pixie-fairies in exclusion to all other character types and runs campaigns focused around them, so you could read it as an odd obsession verging on magical realm situation – but those stories hadn’t been written yet.

I have reason to believe that if the story were written today, some two decades and change later, Jolly would handle these punchlines with much more care. Even here, he does have Sara mention that Gary Jackson sees nothing wrong with people playing characters of genders other than their own, and more recently when revising strips for enhanced standalone publications he’s changed up at least one transphobic punchline to remove that implication, so I’m as sure as I can be that his heart’s in the right place on the subject. 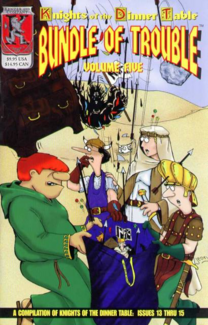 This includes the Barringer’s Rebellion story, which was continued in the Bundle-exclusive bonus material in this and subsequent Bundles of Trouble as the Bag War Four plot arc. This was eventually successful enough that a separate Bag War Saga volume was published, collecting together expanded versions of the original strips to offer the definitive version of the storyline, and the Bag War cosmology would have knock-on effects on the series for years to come beyond that.

The whole Bag War business is based on a great joke – one which, like much of the best Knights of the Dinner Table material, is based on a real gaming anecdote – and also offers a really nice extended example of a particular lesson, especially when you set them alongside the anecdote. Both the joke and the anecdote are based around the idea of a player deciding to put a group of their hirelings in a Bag of Holding as a cheap method of magical travel – one of those fun bits of lateral thinking which you can do when magic items and the like are provided with broad, simple descriptions in natural language, rather than over-precise descriptions which strangle the life out of them and rule out creative uses of them.

In both the anecdote and the Knights story, the player in question forgets that the hirelings are in there until several sessions of real time and several months of in-character time have passed. Here they diverge; in the anecdote, they open the bag to find that most of the hirelings are dead except for one very upset survivor of a “Donner Party”-type situation. In the strip, though, the greatly put-upon Sgt. Barringer and his fellow hirelings use the materials stored in the bag to feed themselves and construct themselves a fortress, which they use to control access to the region inside the bag; after losing a war with him over it, the Knights are forced to pay Barringer whenever they want to retrieve stuff from the bag.

This is an example of the difference between “failing forwards”, as RPG theory circles call it, and whatever the opposite is. In the anecdote that wasn’t much of a failing forwards situation – an accident happened, the PCs lost resources and a bunch of employees, the game moved on. In the comic, however – thanks to B.A. employing a bit of lateral thinking and making sensible use of the materials stored in the Bag – the situation became a source of ongoing plot which eventually filled years’ worth of comic strips, as well as presumably filling a similar amount of campaign time.

Now, I tend not to think “failing forwards” should happen in relation to every single failure in a game – it can become a bit of a burden on the referee (or the group as a whole) to think up an interesting way for something to fail forwards, and if it happens too often the game can ultimately feel a bit aimless, with the player characters so caught up in handling the consequences of past fail-forwards that they never get to proactively chase their own agenda. But particularly exciting fuck-ups demand especially exciting consequences, and here that’s very much the case.