Though the Outer Planes enjoyed a lavish boxed set presentation in the Planescape setting, the Inner Planes (and the planar highways of the Ethereal and Astral) had to settle for being detailed in more conventional books. Part of this probably comes from the fact that the relevant supplements came from later on in the game line’s lifespan – when TSR’s financial woes were biting or after the Wizards of the Coast buyout enforced a more grounded approach. But part of it also comes from the fact that the Outer Planes are, simply put, more interesting – especially from the perspective of the purported “philosophers with clubs” approach of Planescape.

However, the idea of such guides isn’t entirely useless. Even if they are sidelined in Planescape, they’re still part of the Dungeons & Dragons cosmology, and as such the line would feel incomplete without detailing them. On top of that, support for these planes is of at least some use to non-Planescape campaigns, provided they’re at a level where characters are making significant extraplanar excursions or if the referee wants to have an incursion from the Planes in question hit their campaign world.

A Guide to the Astral Plane 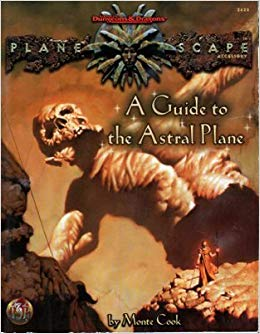 Monte Cook’s approach to the Astral Plane, which underlies the philosophically-driven Outer Planes plus the Prime Material, is to take the idea of it as a place of abstract mental concepts and run with it, pushing the idea that it’s not so much a plane as a Platonic realm of ideas, a nonplanar nonspace that exists in the conceptual gaps between things that’s only called a “Plane” because that’s a convenient way to think of it, inaccurate though it is.

In particular, I really like the way Cook talks it up as a backstage area which people were never meant to peep into, and which was largely uninhabited until people went exploring there – that both ties into the concept of interplanar conduits and portals passing through there and into the idea that it’s where dead gods are to be found. (The gods, of course, do not need a physical form – but they certainly represent enormous intellectual concepts, thus their corpses litter the Astral Plane as giant floating conceptual islands.)

A big advantage Cook has as far as filling out the page count goes is the fact that the Astral Plane is home to the Githyanki, who’ve consistently been one of the most entertaining and interesting monster races in Dungeons & Dragons ever since their introduction in the 1E Fiend Folio. Somehow, despite occasionally unfortunate tendencies in the artwork towards making them look like racist caricatures of Chinese people rather than the withered clearly-not-any-sort-of-human weirdos their better depictions make them out to be, their essential awesomeness has never been diluted. The likes of the drow have had to deal with femdom fetishists, Drizzt fans, and a depiction bordering on blackface over the years, but somehow there’s something about “Interplanar badasses who live on the Astral, are ruled by a lich queen and fight genocidal wars against the illithids who once enslaved them and the Githzerai who split from them during their revolution against the mind flayers” which proves impossible to screw up. Cook’s take on them is no exception.

A Guide to the Ethereal Plane 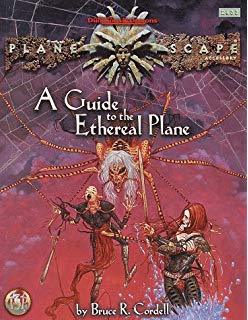 Bruce R. Cordell tackles the Ethereal Plane which connects the Prime to the Inner Planes here. For the most part he struggles because he doesn’t quite have as strong a hook to hang it on as Monte has with the Astral, but the fact that the Ethereal is the home to the Demiplanes is of some help. The diverse nature of them (you’ve got the Demiplane of Dread where Ravenloft happens, the Demiplane of Time, various realms of dream and so on and so forth) does mean that the Ethereal ends up being a bit of a conceptual dustbin, but at least allows Cordell to fill the page count.

I am altogether unconvinced that there’s a meaningful conceptual difference between the Astral and the Ethereal Planes; certainly, in the various folkloric and fictional sources drawn on in devising the planar cosmology of D&D, “the astral plane” and “the ethereal plane” would seem to me to have been basically synonymous. Cordell does a decent job here of filling a book about the Ethereal, but it’s mostly clarifications of material already known plus some notes on things like the monsters that can be encountered there and some sample locales. 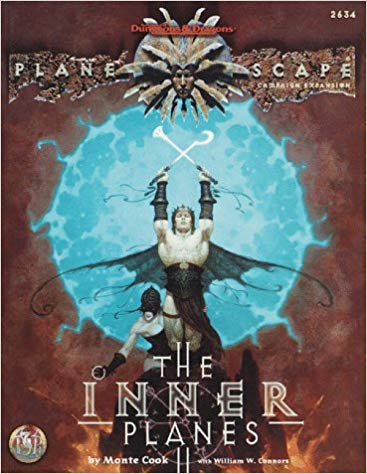 The basic problem here is that in a campaign setting whose elevator pitch is “philosophers with clubs”, the Inner Planes don’t really lend themselves to philosophy very much at all, since each one just consists of a particular type of matter dominating the realm in question. The book more or less acknowledges this; whilst it talks about some ideas underpinning its treatment of the Inner Planes – like “Parallelism”, the idea that things which arise on one Inner Plane will tend to have their equivalents on the other Inner Planes, it still has to admit that there just isn’t much grist for the philosophical mill here.

This is largely a consequence of the legacy Planescape inherited from older treatments of the planes, but The Inner Planes, whilst it does offer a few interesting places in the elemental realms to visit, still ultimately doesn’t do much to change the fact that it’s the Outer Planes which tend to be where much of the action is. As A Guide to the Astral Plane established, you can do some interesting philosophical stuff with the Astral too, and A Guide to the Ethereal Plane, whilst it didn’t find an interesting philosophy to hang the Ethereal Plane on, at least established it as an interesting sandbox to cook up demiplanes and the like. The Inner Planes, though, leaves the elemental realms as being decidedly secondary in the wider action of Planescape, perhaps inevitably.

The Sourcebook That Never Was

The one sourcebook which I think the original Planescape line most needed, and yet never received, is one for the Prime Material Plane(s). Whilst, of course, any non-Planescape and non-Ravenloft D&D setting (or any setting suitable for adaptation on the fly to D&D) can be found there, at the same time it would have been nice to have a supplement offering tools for coming up with especially bizarre parallel material planes, perhaps with a suitable set of worked examples. It would also have been a good chance to have the philosophical struggles of the Planescape setting reflected interestingly in the lives of the Primes. Let’s say the Athar get the upper hand in the cross-multiverse struggle… what does that mean for Anytown, Faerun?