Back in the days of 1st and 2nd edition WFRP, the fanzine Warpstone was an important lynchpin of the fan community. It is no longer extant; a large part of this probably comes down to the fact that to a large extent Internet discussion fora and fansites largely fill the niche that fanzines used to fill, and do so both with less expense to customers and creators alike and with a great deal more convenience. The typical issue of Warpstone involved some homebrew adventures or setting material of varying quality, a few reviews, and some letters and commentary; a reasonably active fan forum will deliver to you all of that, in greater quantity and with greater interactivity and a tighter community, and do so all year long. Another driving factor in the shuttering of Warpstone may have been WFRP 3rd edition; amidst the fan controversy surrounding its stark abandonment of the old system, Warpstone announced that it would not be publishing material supporting it. 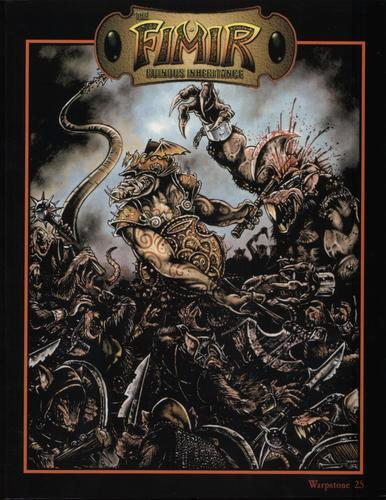 Back in the 2nd edition days, Warpstone hit issue 25. Whilst I can take or leave most issues of Warpstone, this one was rather special, since aside from the briefest possible news and reviews section most of the issue is given over to what is essentially a fully-developed mini-supplement. This is The Fimir: Ruinous Inheritance, drawn together by Robin Low from material penned first with an eye to release by Hogshead before it got passed over, and largely updated to 2nd edition WFRP whilst retaining some concepts from 1st edition which hadn’t been so prominent there (like the gods and daemons of Law and daemons of non-Chaos gods).

Now, by and large this supplement is excellent. The fimir always had this interesting aesthetic to them, a sort of air of marshy gloom and ancient melancholy that really defined them as a faction, and Low does an excellent job of fleshing out their culture and history and myths to give them a really distinctive and interesting niche as a species who have become so irreversibly entangled with their pacts with daemons that they are stuck in a terrible rut and are unable to do anything beyond digging it deeper.

There is, however, a major issue with the fimir – which is that, as per the original canon, they reproduce by kidnapping human women and raping them repeatedly. Whilst it’s certainly horrifying, at the same time there’s all sorts of reasons that make this wildly inappropriate. For one thing, women already have to deal with a disproportionate and unacceptable risk of sexual assault in real life, and having a threat which selectively directs the risk of sexual assault to women in one’s fantasy game can seem grimdark for all the wrong reasons. The extent of the problem is such that there’s every chance that someone at your gaming table has had a nasty personal experience, or knows someone who has, so bringing it to the foreground in a game risks dredging all that up needlessly. Even if nobody is actually outright upset or offended, it’s still a sleazy, cheap way of establishing them as a threat.

For the purposes of playing a wargame you might be able to flat-out ignore it – though there’s enough shitty dudes in the hobby that I suspect that if you were playing at a con or tournament or other public event the odds of someone cracking wise about fimir reproduction are pretty high. For a tabletop RPG, where all aspects of life can become relevant to play, it’s much more likely that a scenario involving the fimir will end up at least making passing reference to the rape stuff.

There’s also a secondary issue there, which is that the trope of “evil, subhuman beasts who Want Our Women” is an ugly trope with some deeply offensive roots – whilst it isn’t always used as a dogwhistle for racism, an examination of the history of the pulp adventure fiction it originates from suggests that it was conflated with the “nasty black men cannot resist raping pure white women” myth that drove the age of lynching and Jim Crow segregation in the South. Sure, there’s older and more primeval stories that the trope also draws on, but I don’t think the canon treatment of the fimir establishes enough space between it and the pulp adventure version of the trope for my liking.

To give him credit where it’s due, Robin Low does recognise that there’s some huge issues here, and whilst the rape-based reproductive cycle is still presented here, it’s done so in brief and cursory terms and accompanied by a note encouraging referees to show some discernment in whether or not to use the material at all, given the sensibilities of their group. This is reasonable enough, but Low also claims that the rape needs to be there because it’s essential to the concept of the fimir – a point on which I disagree entirely. In fact, the extent to which Low manages to expand on fimir culture and their interactions with higher powers, and concentrates on all sorts of features which don’t involve the rape, makes me think that it’d be entirely possible to revise this aspect of their description whilst still remaining entirely true to the grim ethos and aesthetic surrounding them. Perhaps Low didn’t feel able to do that in the context of a fanzine article, rather than something offering canonical details, but if so he should have just said “I’m working on the basis that this is the canon we’ve been given and I don’t think I have the standing to change it”.

As far as ways to tweak the fimir go, why not simply tie it into sacrifice to daemons? It is extensively established in canon and in the article that the fimir make extensive sacrifices to daemons, and that their reproductive process is the way it is because of some terrible blight on their kind connected to this – why not tie them together more closely? Let’s say that in order to reproduce the fimir must sacrifice humans (men or women will do) and old, infirm, injured or condemned fimir alike in a mass ceremony, dismembering the bodies and tossing them down a deep pit or well in their settlements – if the daemons are pleased then new fimir young will spontaneously form within that mass of flesh, eating what remains of the gore as their first meal, and then crawling upwards towards the light.

That preserves the fimir as a threat to humankind, emerging from the bogs to kidnap unwary humans or occasionally even take entire undefended villages, and presents a process which is suitably horrifying without touching directly on the subject of rape. It also ties into their sacrificial practices, and helps emphasise the whole “limited reproduction” thing which is distinctive to them; after all, every sacrifice of a human or fimir for the purposes of reproduction means passing up the opportunity to seek a different boon instead.

This isn’t the only thematically-appropriate way of tweaking them. I was talking with a friend about this and she suggested the idea of having them lay eggs in people’s heads or something – that way the body horror of having these creatures growing inside you isn’t just restricted to something women have to worry about, and it’s a bit more fantastical than literal, actual rape. I like this idea too, though I reckon you could usefully mash up her idea and mine into one: let’s say that the fimir cannot lay their eggs naturally, but must offer sacrifices to daemons to receive them from the Immaterium, and once they’ve obtained the eggs they need to place them inside human hosts to grow and hatch, perhaps through some sort of trepannation process.

The fimir are back in Age of Sigmar thanks to the efforts of Forge World, though the writeup makes no reference to their reproductive process at all so it may have already been officially retconned out. It remains to be seen whether Cubicle 7 address the fimir again for the purpose of their new edition of WFRP (or for their Age of Sigmar-inspired RPG), but hopefully they will be allowed to (and ideally encouraged) show a little creativity in amending the fimir background to something which retains their flavour without using rape as a cheap shock. In the meantime, The Fimir: Ruinous Inheritance offers a wealth of detail on them, and whilst the opportunity to amend this serious issue with their background was missed, there’s plenty in here to enjoy which doesn’t rely on that at all.

4 thoughts on “A Skeevy Inheritance”