After kicking off Select Your Own Timeline, his own take on Choose Your Own Adventure, with Escape From the Billings Mall, two-time Hugo Award winner and greatest living thinker Dr. Chuck Tingle proves love is real again with two more gamebooks set in the Tingleverse – a realm littered with familiar places, sentient objects, dinosaurs, Bigfeet, and all the other things you find in his books or RPG material. 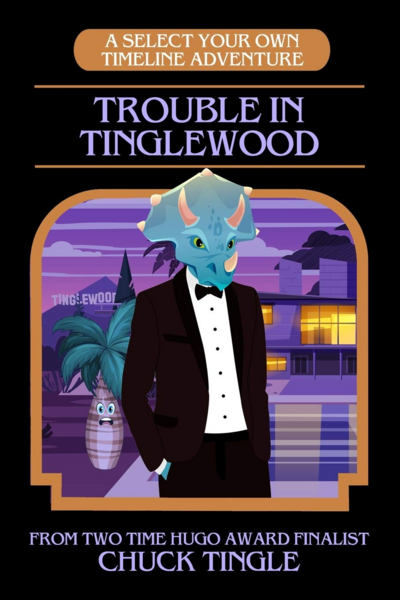 First off is Trouble In Tinglewood, in which you head down to the City of Devils – the Tingleverse equivalent of Los Angeles – to try and make it in showbiz so you can tell your story for the world. As you make it into town, it turns out that the place is in peril: a serial killer known as the Tinglewood Slashman is on the loose! Will you be able to find creative fulfillment and stop the murder spree, or will you just be one more victim of the Slashman and/or the unforgiving world of showbiz?

Compared to Escape From the Billings Mall, Trouble In Tinglewood has a much looser structure, where much of the plot of any particular runthrough will depend on who you choose to try and befriend and how those friendships go – or, conversely, whether you go it alone (though the more solitary you are, the more likely you are to be targeted by the Slashman). As a result of having to accommodate a very wide range of possibilities, any particular playthrough is likely to be quite short, but that’s handy in its own right since it means attempting other options is fairly easy.

The usual Chuck Tingle humour -in its safe-for-work form – is on show here; no poundings in the butt, just wholesome jokes in a surreal world. On any particular playthrough you might go to Chocolate Milk Anonymous with well-known triceratops Bob Downer Jr., confront a rampaging horde of cannibal Valley Girls, join a hippie crew’s recording session or help a punk biker unicorn with her artwork. It’s fun, but the lack of focus makes it feel a bit less substantial than Escape From the Billings Mall. 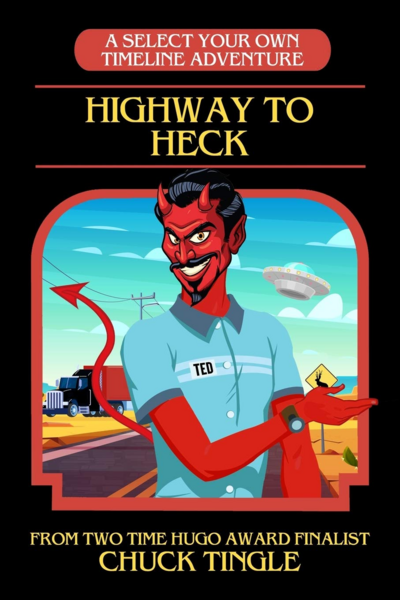 By contrast, Highway to Heck is more structured. This casts you as a trucker for Truckman Trucking, undertaking your final delivery before retirement. It should be a routine run – just pallets of chocolate milk, delivered from Billings, Montana down to San Diego. However, notorious devilman Ted Cobbler has taken a downright infernal interest in your payload. What is your real cargo? And can you keep it out of Ted’s evil clutches and deliver it safely?

Road trip-style plots have been used in gamebooks before – think of Ian Livingstone’s Freeway Fighter – and they’re a good concept if you want to cook up interactive fiction with a strong central plot. Players can better accept a more linear plot if it makes sense for the concept in question – there’s only so many ways you can go from Billings to San Diego, after all. You can weave in elements of interactivity and choice by doing a string-of-nodes structure: have various bottlenecks that the player must visit on the route (here it’s Billings, San Diego, and a few points in between like Las Vegas), and then give them their choices between each node. Chuck uses this to good effect here.

Though the book could do with a few more nods to trucker culture – not once did I get to use a CB radio! – I think Highway To Heck might be his best-designed gamebook yet, particularly for the way it offers a wealth of valid ways to make your way through the book without becoming completely diffused and unfocused.