In 1982 Chaosium would publish a clutch of solo adventures for the 2nd Edition of RuneQuest – the SoloQuest collection of three mini-adventures, Scorpion Hall, and The Snow King’s Brides, all penned by Alan LaVergne, who along with his wife Debra had been a participant in Steve Perrin’s RuneQuest campaign. As Chaosium’s first foray into solo adventures, the SoloQuest series – now reprinted in one volume as the SoloQuest Classic Collection – is a rather interesting early pass at the concept, and also one which raises the question of what solo adventures are for and how they fit in with more traditional referee-implemented RPG gameplay. 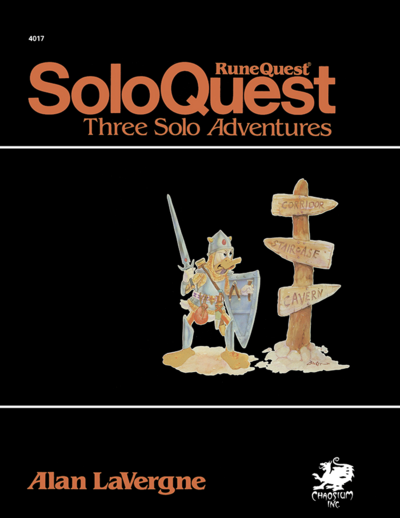 One thing which is especially interesting about the SoloQuest adventures is that they are very much designed to be played using a player character that you have fully rolled up for yourself. This is in contrast to solo adventures produced for Call of Cthulhu like Alone Against the Dark or Alone Against the Frost, which both gave you control of pregenerated characters (with some level of customisation possible).

It’s also something of a burden, because RuneQuest 2nd Edition character generation could be a bit fiddly, as well as having various options (such as rolling up five years’ worth of pre-game experience, which was often a very sensible option if available) which could be a bit laborious to work through if it’s just for the sake of a short solo adventure. By comparison, the more streamlined Basic Roleplaying framework that Call of Cthulhu was built on made it easier to take Alone Against the Flames and incorporate a simplified stat-up-as-you-go method of developing your character attributes into the adventure itself, as was done for the version published in the Call of Cthulhu Starter Set.

This is exacerbated by the adventures not really including much in the way of character generation guidance – which isn’t to say that there isn’t some advice to read before you play. Indeed, there’s some fairly extensive notes on how to play through solo combats in this system here; this is another aspect that solo adventures for Call of Cthulhu were able to evade, since being based around an investigative horror game it was far more acceptable for them to simply elide combat altogether, but RuneQuest is a game where many PCs are skilled, magically educated combatants, so skipping over the combat and magic would have felt awkward.

It’s also worth considering that LaVergne was working at a time when there were not that many other examples of solo RPG adventures with full combat and magic. D&D would not get into solo modules until 1983, at least in terms of official products, and whilst The Warlock of Firetop Mountain kicked off the first wave of Fighting Fantasy gamebooks in 1982, it seems very unlikely that LaVergne would have had it to hand when preparing these.

That said, LaVergne wasn’t entirely fumbling in the dark, because at least one RPG of the era had done very well out of solo adventures for around five to six years by the time SoloQuest was being prepared and published, that being Tunnels & Trolls. In fact, it’s the Tunnels & Trolls model which SoloQuest resembles most closely, to the point where I suspect that LaVergne had a well-worn stack of Tunnels & Trolls solos sat on his desk when he was working on these. In both cases, the assumption is that you will run your own player character through the adventure, designed with all the options you have available to you taken into account. (Indeed, the SoloQuest adventures include options which would only be available via supplementary material like Cults of Prax.)

The thing is that Tunnels & Trolls worked very well for solo play because it’s an extremely simplified system, with almost all aspects of combat tactics largely abstracted out. It’s very much in contrast to RuneQuest‘s more detailed-oriented system, which precisely because it is so detail-oriented feels less suited to this sort of use. RuneQuest also includes a lot of utility spells, special skills, and languages that Tunnels & Trolls simply doesn’t include, but which LaVergne finds himself obliged to provide scope for using in here, with the result that the space available for flavourful descriptions is further reduced by the need to take all of this into account.

Designing the adventures for pregenerated characters would have avoided the need for this entirely, but the pieces here seem to be designed with the intent not to provide a wholly standalone experience, but to provide adventures for you to take your RuneQuest character on in the context of an ongoing campaign. The Dreamquest solo in the first collection, for instance, talks about how if you fail it you can retry a year later, which presumably means after an in-character year of play.

That said, it’s an open question whether many referees would have necessarily gone for including the action of some of these adventures in their home campaign, since they can tend to go several notches more gonzo than most other RuneQuest material, especially this late in 2nd Edition’s run. The Snow King’s Bride gets particularly silly at points. On the whole, the SoloQuest Collection is an interesting curiosity, but I don’t think it cracks the puzzle of making a really solid solo RuneQuest adventure. Perhaps, if Chaosium are developing a RuneQuest Starter Set for the present edition of the game (not a terrible idea given that it’s their other flagship line at the moment), we’ll see them take another crack at the matter.

One thought on “RuneQuest Classic: the Solo Adventures”