Mansions of Madness Volume I: Behind Closed Doors is the first part of Chaosium’s expansive revision of the well-regarded Mansions of Madness scenario collection. As the “Volume I” bit implies, it looks like this will end up being a multi-volume series, and presumably each volume will follow the same format of this one in terms of including both updates of some adventures from the original collection and brand-new scenarios in a similar vein. As the Behind Closed Doors bit of the title suggests, the scenarios in this one all strongly feature situations where something super-dodgy is being done, well, behind closed doors by a figure in the scenario, a secret shame, a hidden obsession, or a furtive project inviting Mythos-flavoured disaster. 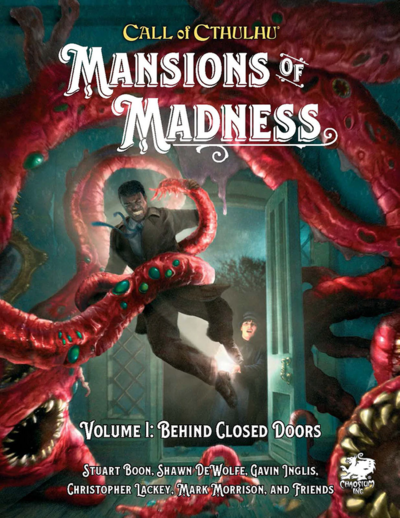 In fact, perhaps to make this a tastier offering to people who already have the original material, there’s actually more new adventures here than old. The new offerings – The Code, The House of Memphis, and The Nineteenth Hole can tend towards the pulpier side of the game, but this will very much depend on presentation (even the pulpiest could end up having an atmosphere more akin to Lovecraft’s From Beyond) and presents a useful counterbalance to the older adventures, which tend towards less pulpy elements (and one of which is outright grim in some of its subject matter).

When it comes to the updates of the old adventures – Mister Corbitt and The Crack’d and Crook’d Manse – these are pretty decent, largely concentrating on presenting information more clearly and adding some quality of life features (many of the NPCs previously left unnamed now have names, for instance, sparing the referee of the need to think up a name on the spot). I wasn’t sure about The Crack’d and Crook’d Manse in the previous revision, but to my eyes the version here manages to swing things around to be less about dangling red herrings and deliberately misleading the players and more about establishing atmosphere. (The bit with the shed, in particular, is made substantially fairer, with the stuff I objected to previously now only happening if a PC ventures in without an adequate light source – so it’s gone from a pointless gotcha to actually a kind of fair enough incident to happen if you go poking around under those circumstances without taking sensible safety precautions.)

The supplement continues the new Chaosium practice of, where viable, pitching adventure collections as being playable with the 7th edition core rules or the Starter Set; in particular, it suggests that the adventures here are “an ideal next step” for people who followed up the Starter Set with Doors to Darkness and Gateways to Terror. The introduction notes that there’s less Keeper advice here than for those scenarios, though to be honest that’s fair enough since novice referees who’ve gone through those should already have been trained in the basics of best practice, and old hands don’t need the support anyway. The commitment to making the Call of Cthulhu range approachable for those beginning with the Starter Set is admirable, and probably plays dividends considering the massive sales of the Starter Set following it being featured on Critical Role.