Arkham Now is a Call of Cthulhu supplement first published in late 2009. Primarily written by Brian Courtemanche and Matt Sanborn, the declared intention of the book is to provide a modern-day equivalent to the 1920s-set Arkham Unveiled supplement, in terms of providing a sourcebook profiling good ol’ Arkham for the modern era. The authors are upfront about it being a “labour of love”, and it sits among their first credits in the game line, but it is decidedly rough around the edges and clearly needs further development in several respects. 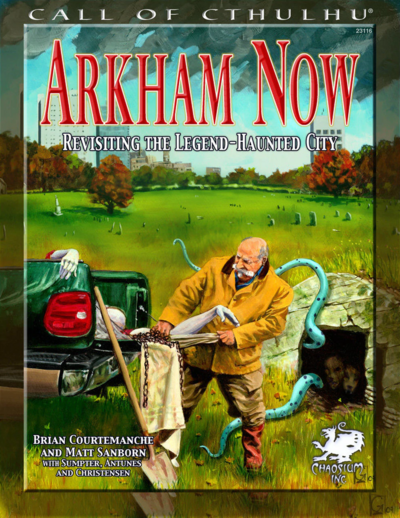 In terms of the publishing timeframe, it’s a product of that window of time when Charlie Krank was pretty much running Chaosium as he saw fit: Lynn Willis had left in 2008 due to ill health, but it was only after his death in 2013 that his stake in the company got redistributed to Greg Stafford and Sandy Petersen, which allowed them to exert somewhat more supervision over things until they decided to take back control, remove Krank, and put Moon Design in charge.

One of the more disappointing things which happened during that span of time between Willis leaving and Stafford and Petersen stepping in was a decline in the quality of presentation of Chaosium products, especially their interiors. In the mid-2000s, during the last years of Willis’ tenure, the interior layout of Chaosium books could most kindly be described as “vintage”: it was hardly cutting-edge stuff, but it wasn’t outrageously sub-par by wider industry standards, especially if one considers that Chaosium by this point was a small press punching above its weight rather than a major company in the industry.

In the span of time when Krank was unsupervised, two things happened: the presentation of Chaosium products got noticeably sloppier, and production values in the wider industry got better; one of the most positive consequences of the Moon Design takeover is that they’ve really pulled their socks up on this front.

Why Chaosium’s layout, editing, and presentation declined in this fashion in this time period, I am not sure, but I rather suspect that Charlie Krank shared the view occasionally expressed by Matthew Sprange when it came to editing and proofreading – in the market at the time you generally got the same sales regardless of whether or not you spent money on this sort of thing, so why go to the extra expense? This might have passed muster in the mid-2000s, when the D20 boom meant that an ungodly amount of shovelware clogged the marketplace and you didn’t have to put too much effort into look obviously nicer than the competition, but the tide has changed now.

Either way, as I’ve noted in reviewing products like Devil’s Gulch, it really seems like some Chaosium products from this period are barely better in terms of production values than the releases on their monographs line – a quaint forerunner of more current “community content” programs where Chaosium would print your homebrewed supplement for their games, but you’d have to do all the editing and layout and proofreading yourself.

Arkham Now is an interesting case because the proof-reading, editing, layout, and other presentational aspects are clearly not flat-out amateurish, and they are by the exact same person who was in charge of the same aspects on Devil’s Gulch. It isn’t great, mind you, and there’s a few flat-out howlers; on page 142 on my copy there’s an enormous blank space at the top of the right-hand column where I suspect some sort of art or other visual thing was meant to go, and the text immediately after that begins mid-word, as though a chunk of text (and, I think from context, a header) is simply missing. That’s the sort of thing which is not just wrong, but so obviously wrong that even a single proof-read of the proof copy from the printers would have caught this, but obviously didn’t.

Still, the presentation of the rest of the book satisfies me that McLean wasn’t awful at the whole layout and presentation business – my feeling is that she was probably doing the best with the time and resources she had, and when it came to Devil’s Gulch the time and resources in question were woefully inadequate. On going back and double-checking I also note that she did the layout work on Mythic Iceland and Blood Tide, whose presentation was perfectly fine, which only confirms to me that with Devil’s Gulch she was trying to do the best she could with the material she had.

No, Arkham Now feels like a monograph that got turned into a fully-fledged supplement not in the sense of the presentation, but in terms of the text itself. Quite simply, this is the kernel of a good idea which got waved through to layout and printing way too early and badly needed more rounds of development. The main issue here is that the Arkham presented here is painfully generic; the supplement may as well be called Anytown, USA, given how generic it actually is. A few scattered references to Lovecraft stories and Arkham’s history exist here and there, but they don’t really give Arkham the feel of a distinctive, actual place.

Part of the issue is that the balance between describing Mythosy horror and absolutely mundane stuff is very much off. Oh, there’s horrors riddled throughout the book, but there’s way too many entries in here describing utterly mundane, generic locations which could just as happily be improvised by any referee who has the sort of general knowledge of American urban life which has become essentially ubiquitous due to the ubiquity of American pop culture. A good chunk of one page is devoted to describing “Mick E. Cheese’s”, a non-trademarked ripoff of Chuck E. Cheese, and doesn’t really tell you anything about it which you couldn’t have already figured out either from your own prior knowledge or five seconds of Googling.

Maybe a book like this would have worked better back in the 1990s – back when White Wolf’s (City) By Night books sold like hotcakes, and gamers without much direct knowledge of modern life in the USA would have been able to make use of a supplement like this. Frankly, I have no idea how someone would be sufficiently disconnected from pop culture not to already have an idea of what towns in the modern USA are like, but simultaneously connected enough to buy Call of Cthulhu products in the first place, but such people may exist. However, in these days of an ubiquitous Internet where with a bit of searching I can get an instant look at, say, a shopping district in some randomly-chosen US town, this sort of thing just isn’t useful.

The amount of mundane detail presented here would be more forgivable if it weren’t so utterly pedestrian. Even a token serial killer/rapist, or a twitchy taxi driver whose last name is “Bickle” isn’t enough to spark interest; if anything, their bland and unimaginative presentation (or the outright ripoff represented by the latter) just further makes the mundane side of things seem mediocre. More broadly, it doesn’t seem to be a town where anything is happening in the mundane sphere – no tensions, no controversies, no debates, no projects, no ambitions, nothing. (It doesn’t help that everything either seems to have happened in the 1920s-1930s or is happening now, and not very much seems to have happened in the intervening time.)

It lacks the dynamism that a real place has. Even in terms of form factor, the book is notably slimmer than, say, many of the supplements in the Chaosium Secrets of (Place) series, which makes it seem like Arkham is the poor cousin to those more interesting locations.

In short, I feel like Charlie Krank should have told Courtemanche and Sanborn “OK, that’s a good start, but go back and develop it further” when they presented him this text, but it really feels like he just said “Eh, it’s enough copy to fill a book, let’s go with it”. What should be the inspirational fulcrum of a modern-day Cthulhu campaign seems absolutely bland here, especially compared to, say, literally anything that has ever been published for Delta Green. Hell, even an average Vampire: the Masquerade city book at least has more atmosphere than this bland nothingburger of a book.

One thought on “Arkham? No”