After the first edition of Chris Spivey’s Harlem Unbound earned Kickstarter success and critical acclaim and put Darker Hue Press on the map, Chaosium sit up and took notice. The original book had been put out under licence from Chaosium, dual statted for Call of Cthulhu and Trail of Cthulhu; now Chaosium were interested in working more extensively with Spivey, not only reaching a deal to put out a 2nd edition of Harlem Unbound directly from Chaosium but also commissioning other work from him, including a spruce-up of the racially-themed classic scenario Dead Man Stomp and a quick discussion of Lovecraftian racism for the absolutely superb new Starter Set for the game. 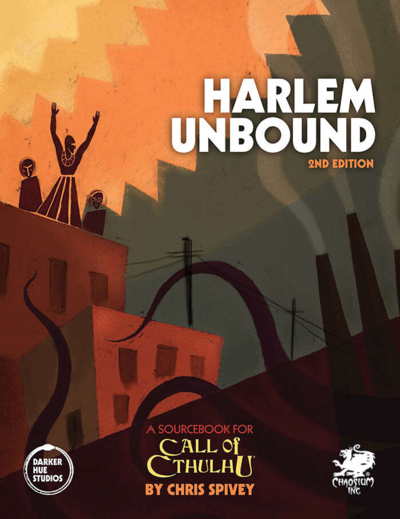 (They had also signed on to make a science fiction game with him based on a blend of black and Jewish themes, Kadimah, but the two have agreed to part ways on that – Chaosium’s statement on the matter, which was co-issued with Spivey and doesn’t seem to represent any great rancour on either side, explains that Chaosium had realised that with their existing commitments and plans they couldn’t commit to giving it a release schedule of the sort it deserved. In addition, the impression I get is that it’s an intensely personal passion project on the part of Spivey, tied in with his own family heritage to such an extent that it really makes more sense as an indie solo project of his, rather than a conventional commercial RPG with contributions from a variety of hands which would inevitably dilute the vision.)

Now 2nd edition Harlem Unbound is out in hard copy, and good golly is it a lovely item; the original book was a pretty decent item in its own right, but Chaosium have brought to bear production values above and beyond what a startup publisher like Darker Hue had been able to muster on that project.

In terms of what material is retained and what is gone from here, the excisions from the first edition are as follows:

On some level it is nice that owners of the 1st edition get some bits of exclusive content, but I don’t think any of the excisions are worth getting too upset about. It is very evident that whatever the reasons for the cuts are, it can’t be page count – because most of the existing material in here is expanded appreciably. In particular, whilst one scenario is gone, you get a whole extra four new to this version of the book; likewise, losing some sample NPCs may be a shame, but it is more than made up for by the extensive expansion of the list of actual local figures in the book, which means that the cast of characters available to Keepers working from 2nd edition is expanded even considering the edits.

Spivey reassured backers of the original Kickstarter that edits and tweaks to the 2nd edition were done taking feedback into account, so I feel that any edits here reflect that. It is possible that Spivey felt that some of the removed content didn’t hit the standard of the rest, and wasn’t amenable to being polished up to the same level. In addition, some of the removed supporting cast NPCs might have also been NPCs created with the input of backers at one of the higher-level support tiers, which may have posed intellectual property issues that made their inclusion tricky.

Either way, what is lost is more than outweighed by what is gained here; the material here is beefed up, expanded on, and given an extra polish on all fronts, with extra depth added to the setting details and further thought given to alternate options and possibilities in the scenarios. Much of the artwork from the previous edition has been retained, more art is included, and some lovely cartography has been applied – including a fabulous fold-out map of 1920s Harlem, which the original did not have, a useful rethink has been given to the running order of the chapters, and the layout is of the same standard and house style as expected for current Call of Cthulhu material, which is a significant improvement over the rather sparse layout job the original had (though I felt the main problem with that was the need to dual-stat it).

Chaosium absolutely do not half-ass this new edition of the book, and nor should they have: the original edition of this has been selected for inclusion in the libraries of multiple museums, after all, so we’re talking an RPG supplement of significant artistic merit. Through this collaboration with Spivey, Chaosium have not only helped significantly improve upon the original, but have also embraced it to the heart of the Call of Cthulhu “canon” – third party supplements are one thing, but giving the book a Chaosium release means that none can deny its importance to the game line.

In one of his additions to the book, Spivey includes a side bar discussing how white Keepers have talked to him about how they admire Harlem Unbound, but they’re reluctant to use it in their games because they are afraid to “get it wrong”, and says that whilst having some awareness that it’s possible to get this stuff very, very wrong is important, it is important that Keepers engage with material written by diverse creators if they really want to say they run a table open to a diverse range of players. (After all, if a black player knew you didn’t want to run content about black history written by a black designer because you have hangups about touching that material, that’s got to be awkward.) With this new edition of Harlem Unbound, Keepers have never been better-supported in presenting this era in Call of Cthulhu.