Shadows Over Stillwater is the first adventure supplement supporting Down Darker Trails, the Wild West setting for Call of Cthulhu. It’s also another example of a trend in current Chaosium releases I’ve highlighted with my recent reviews of Reign of Terror and The Smoking Ruin & Other Stories, in which supplements offer a mix of adventure material and setting material, with the adventures also including a bunch of stuff you could very happily recycle for your own purposes. 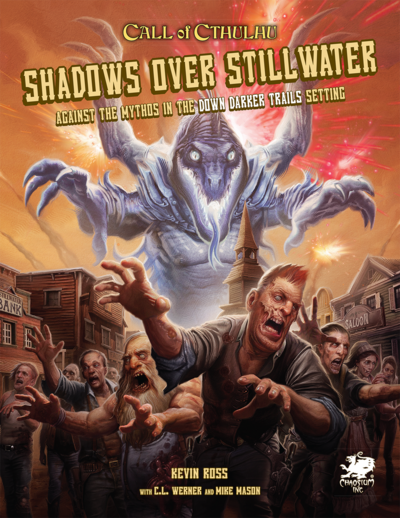 Really, any adventure for any RPG should be able to do this, and to an extent it’s always possible to grab some NPC stats and restate them. But there’s been a lot of sub-par adventure releases over the years (and Call of Cthulhu wasn’t entirely innocent of this) where the adventures present a single, linear plot, and focus on it so tightly a) it doesn’t really develop any material beyond that which is placed directly under the spotlight of the adventure and b) that material which does get developed is a royal pain to extricate from the action of the adventure, because it is largely defined solely in respect of its role in the immediate story at hand without much thought given to making it a persistent place, person, or thing in the world once that story is over.

The adventures in this book are not like that; whenever they introduce a town (and we get several in here), where lesser adventures would give a brief rundown of the place and only really talk about the locations and NPCs directly relevant to the adventure, here the towns are developed to be living, breathing places, and any one of them could be places the PCs visit time and time again in an ongoing campaign.

Indeed, one of the sections of the book isn’t really an adventure at all, or at least not labelled as one – that’s the chapter offering a deep dive into the town of Stonegarden. Stonegarden, in fact, is a sandbox with no specific adventure attached, because to a sandbox-minded referee it really doesn’t need one; it’s a mining town where hidden Mythos peril lurks in the shadow but is also shaped and warped by good old-fashioned human greed and desperation. Toss some Wild West PCs into that environment and, particularly if your players are good at playing proactively, shit will kick off in memorable fashion sooner rather than later.

As well as offering a mixture of long adventures and short adventures, sandbox settings and linear campaigns, the book also offers a mix of pulp-leaning and purist-leaning material; whilst all the material in the book can happily be run with or without the Pulp Cthulhu rules, it feels to me like the titular mini-campaign really badly wants to be run as a Pulp Cthulhu game, with its action presenting a classically campy, over-the-top pulp plot, and if you wanted to run it in a more purist style you would need to do a substantial amount of work to hit the right tone. That’s fine, though – you can still use the towns in the adventure even if you don’t follow the action itself, should Pulp Cthulhu not be your style.

Conversely, Beneath the Burning Sun is really nicely pitched; it’s an adventure which could be run as a very pulp affair, or instead you could pivot it towards a more purist take simply by putting more emotional weight and gravitas on the darker moments of the adventure.

It should be so easy to do this, but so often adventure designers don’t do this, or if they do it’s framed as an utter afterthought. Kevin Ross, who seems to be the creative lead on the Down Darker Trails setting, has helmed another useful project here, and it’s certainly pleasing to have some more fodder for the setting other than cannibalising the Devil’s Gulch supplement, a Basic Roleplaying supplement from late in the life of the Charlie Krank-helmed regime at Chaosium which had a similar “Weird West” feel but was horribly sabotaged by a nasty, cheap layout and editing job which had no place in a professionally-released product. Comparing the production values on this book to that is like night and day, and perhaps exemplifies the good that the Moon Design regime has worked at Chaosium better than anything.