The latest hardcopy release from Chaosium for RuneQuest is The Smoking Ruin & Other Stories, another supplement offering a nice mix of setting material and prewritten adventure stuff, which was also the case for The Reign of Terror release for Call of Cthulhu that I reviewed recently.

The balance here is still mostly in favour of adventure material than pure setting detail, but less so than in that product. The book includes an overview of the South Wilds, a region of Dragon Pass which includes, among other things, the titular Smoking Ruin – a city where legend has it a group of trolls met a terrible end and their corpses burn eternally. (The truth of this may be discovered by characters who attempt the longest and most detailed adventure in here.) 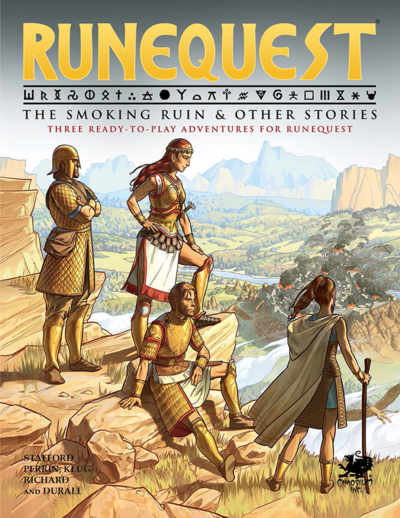 The book also offers a closer look at some significant locations in the South Wilds, and some more adventures – there’s the Wild Temple, a massive open air holy site, the Lost Valley which offers an interesting little community, and the adventures Urvantan’s Tower in which the fate of the Lost Valley relies on quick action from the player characters and Grove of Green Rock, in which the player characters can get hired to help a massive elven project to establish a new sacred grove in Dragon Pass.

Glorantha can be a daunting setting, given all the detail that has been lavished upon it, and the question of “How am I meant to make a game out of this?” can come up; the adventures provided here, as well as offering deeper insights into the locales in question, are useful worked examples in this respect. Each of them, in their own way, provides both an interesting immediate challenge, potential for future campaigning based on them, tie-ins with longstanding history and myths of Glorantha, and a strong emphasis on the consequences of the adventure for the communities affected.

All of the adventures assume that player characters are starting off from the settlement of Clearwine, which is detailed in the GM screen pack, though The Smoking Ruin gives enough of an overview of it that you could make a start with just this book and the current core rules, though the Clearwine reliance of them varies; I would say the other two scenarios could pretty happily be run without a Clearwine connection, but The Smoking Ruin has enough of an impact on the politics of that settlement that you’d need to do some serious work to shift it to a different starting locale.

Each scenario, in its own way, helps tease out something distinctive about the Glorantha setting and how this present of the game depicts it. The Smoking Ruin emphasises mythic history, storytelling, and relationships with spirits as part of the game; Urvantan’s Tower can showcase the capabilities available through Heroquesting and Illumination, Grove of Green Rock can present a regular diversion for the player characters over years, in keeping with the game’s new “one adventure per season” assumptions.

The book also has references to books for the line which have not come out yet, but which seem likely early components of the supplement line. There’s word on an upcoming Gods of Glorantha, for instance, and reference to Heroquesting rules in a Gamemaster Sourcebook which doesn’t exist yet. One can only hope we’ll see those soon; not only does this book suggest that the production values and quality of material for the new RuneQuest is going to remain strong, but it will be damn shame for this to be yet another edition of RuneQuest which makes passing reference to Heroquesting rules but doesn’t actually get around to publishing them.

2 thoughts on “Mini-Review: The Smoking Ruin & Other Stories”