Although I am much less inclined to run multi-episode globe-trotting campaigns in Call of Cthulhu as written as I was in my earlier years of running the game, I think there’s good reasons why the game’s classic megacampaigns like Masks of Nyarlathotep or Horror On the Orient Express are as popular as they are; they also act as backdoor setting supplements. Masks offers looks at locations on a range of different continents in the 1920s; Orient Express literally takes you on a whistle-stop tour of Europe. As such, the setting material can be useful even if the scenario itself isn’t used. 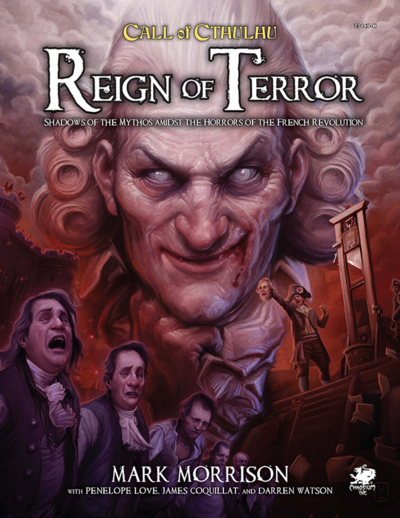 However, especially in their latest versions, we’re talking about some dang expensive products to buy just to use the setting stuff. They’ve also been expensive to produce; the 7th edition Masks set seems to have done pretty well without major snafus, but the Horror On the Orient Express Kickstarter was one of the two which broke the old regime at Chaosium.

Perhaps a more sustainable type of scenario-cum-setting guide product is something more like Reign of Terror. This is a significantly more terse scenario – it’s essentially a two-episode micro-campaign – attached to sufficient setting material to bring to life the place and time it depicts. And that place and time is pretty damn interesting, because we’re talking Paris, 1789-1794, during the rise and fall of the French Revolution.

A substantially thicker supplement could be made of the subject matter, of course, but the basic details here, the scenario seed suggestions, and the adapted character creation rules is more than enough to run Call of Cthulhu material in the setting in question, and should hold more or less true for game running from a broadly late-18th-to-early-19th Century campaign.

It’s notable, in fact, that you could probably use the rules support here and a bit of research of your own to run a Call of Cthulhu game set in the Napoleonic era – a concept which Modiphius had been saying they wanted to do with Mon Dieu! Cthulhu, a followup to Achtung! Cthulhu, but which doesn’t seem to have taken off yet. Although some technological advances in weaponry were made between the revolution and the end of the Napoleonic Wars, I’d argue that whilst significant on the macro battlefield scale, the simple gun stats here are fine to cover any rifle during the era for the purposes of a roleplaying scenario, and the professions here would suffice just fine for the period.

The scenario presented touches on enough Revolution-relevant themes that the material there could be usefully used outside of the story in question – the 1789 episode includes a visit to Versailles, for instance, with a map of the place offered, and the 1794 episode includes a certain amount of the secret police paranoia of the Terror. It is also designed to be either played as a standalone or used as part of the Horror On the Orient Express campaign, which already includes some flashback scenarios set in other places and eras.

Brief enough to not outstay its welcome, but cramming in enough substance to feel like good value for money, I’d say Reign of Terror more than adequately opens up a new time period for Call of Cthulhu, and I hope Chaosium have more planned for it.

3 thoughts on “Mini-Review: Reign of Terror”