Chaosium’s efforts to support the Big Yellow Book version of Basic Roleplaying before the new regime took over ended up being a bit of a mixed bag. Devil’s Gulch was horribly botched when it came to the presentation. and Kenneth Spencer’s rather interesting Blood Tide was merely good rather than great because of a sloppy editing job weighing it down. In both cases, there seemed to be a basic lack of professionalism involved in the editing and layout at Chaosium’s end – like the products in question had originated as monographs, and didn’t really get a full polishing-up into a professional-grade product. 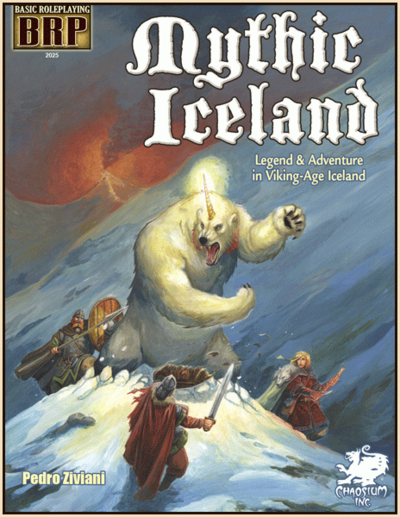 Enjoying a much better presentation, and perhaps the best of the Big Yellow Book supplements, was Mythic Iceland. Primarily designed by Brazilian-Icelandic game designer Pedro Ziviani, with the aid of a range of other Icelandic contributors and playtesters, this offers exactly what it says on the tin: a guide to running campaigns in a version of historical Iceland (the baseline assumption is that games will be set somewhere between the foundation of the Alþing assembly and the appointment of the first Christian bishop) where all the myths and legends believed by the Icelandic people are true.

This is a rich blend of genuine folklore derived from sources such as the Eddas, historical details conserved in the Icelandic Sagas, and some of Ziviani’s own inventions to fill in the gap, which he readily admits and highlights. The major gap is that the source material, whilst giving some importance to elves, doesn’t really fill in many details on them, so Ziviani had to flesh them out a lot himself. They are not, at least by default, a PC option, instead being a hidden people that PCs can encounter on adventures.

The historical side of the equation is particularly fascinating. Whilst most narratives of colonising an untamed land are utter bullshit, covering for arrogant displacement and mistreatment of indigenous populations, the Norse settlement of Iceland in the 9th Century genuinely seems to have been an exception, with the island being genuinely uninhabited by human beings save for a small settlement of Irish monks who left either when the Norse arrive or before they showed up. The settlers, having left Norway because of the onerous taxes, decided to do without a king, and after some early disorganisation eventually established the Alþing in 930 CE.

The Alþing is the oldest still-extant Parliament in Europe, and Iceland soon adopted a systemised rule of law which, whilst it had its harsh edges like a certain amount of duels to the death, nonetheless provided a striking early example of the sort of political system we are used to in the modern era. Much is made of this in the book, and this is the right call; it depicts a unique Dark Ages/Medieval society which ends up being distinctly different from what is commonly expected from the era.

The description of society does include a discussion of expected gender roles, because Ziviani is trying to present in the book the type of society which is described in the Sagas rather than misrepresenting what is in there, but at the same time Ziviani does a good job of not using this as an excuse to block female characters off from doing anything interesting. On my readthrough the only thing it explicitly says that a woman is barred from doing is being a goði – one of the priest-chieftains that free householders answer two and who speak for them in the Alþing, and the assumption is that PCs won’t start out as goði anyway.

It would be near-trivial to ignore this if a group wanted to go ahistorical – but if you do want to go historical, the book does a good job of underscoring and highlighting areas in which women did have significant power and agency, particularly in ways which could inspire interesting gaming. For instance, whilst women cannot be goði, they can be a goði’s heir – in which case they inherit not the position itself, but the right to choose who holds it; this is a setting feature which has ample possibilities both as a plot hook for referees to base scenarios around and as a gambit that women can use to exert a certain amount of power anyway.

A particularly nice touch is that the description of women’s typical activities is accompanied by a rundown of similarly unadventurous work done by men, a segment which underscores that a) both men and women do important economic activities and b) adventuring is an exceptional thing for men or women alike to do. Ziviani also makes sure to throw in instances of women doing fierce, warrior-like stuff in the Sagas to drive the point home that gender roles in this society didn’t work like they did in, say, Norman England.

Still, if you want to go ahistorical and make the genders wholly equal for your Mythic Iceland game, it’s very easy to do so, in part because the book doesn’t go out of its way to say that women are excluded from this or that or the other thing; on the whole, I would rather supplements like this provide the details so that gaming groups can decide whether they are interested in exploring stories in this setting in which the different roles and rights of the recognised genders are significant, so the material is there to use if the table decides to go for it.

A more problematic aspect of the setting is the inclusion of slaves – which did exist in Icelandic society, and the book pulls few punches about how bad their lot was rather than pretending that slavery didn’t happen. Still, it may bug some players that PCs own some slaves by default as part of their farmstead (PCs are assumed to have the status of free householders), and there’s a an encouragement to give your slaves “exotic” names, and while in context I am sure the intention is to use European names (since that’s where slaves would have mostly been taken from when the Icelanders went a-viking), I think Ziviani hasn’t appreciated the baggage attached to “exotic” here.

The discussion of the wider world includes some discussion of the Norse settlements in North America and their difficulties with the local tribes. This may be an interesting concept for exploring Precolumbian narratives in which settlers in Vinland are on a much more equal footing with the locals in terms of the technology they had to bring to bear than the gun-toting wave of colonists that would come centuries later. However, the details on the locals are a bit sparse and it feels evident that they weren’t compiled with the benefit of anyone with deep knowledge of those peoples.

In terms of magic, there’s a fairly detailed rune magic system which, rather than the one in RuneQuest and the like, is based around the essential aspects of rune magic as expressed by Odin in the Eddas; it manages to be quite flavourful and interesting without being too stodgy. There’s also a nice set of religion rules, drawing on the Big Yellow Book’s Allegiance rules as derived from Stormbringer.

Ah yes, about that: this is very much a supplement to the Big Yellow Book, rather than a standalone game, and as such requires that book in order to use. This may change in the future: Chaosium intend in the future to bring out a 2nd edition of Mythic Iceland (the manuscript is in but they want to get some RuneQuest stuff squared away before they launch the new Mythic Iceland line), with more supplements and support to follow. I will follow it closely, because this first pass at the concept may be the most interesting setting Chaosium has explored since Pendragon.

2 thoughts on “The Continuing Saga of BRP”