After branching out in to tabletop RPGs via the Tingleverse RPG, Chuck Tingle has once again expanded his range outside of his usual surrealist comedy erotica niche by producing a gamebook. Specifically, he’s written Escape From the Billings Mall, the first of hopefully several Select Your Own Timeline books. 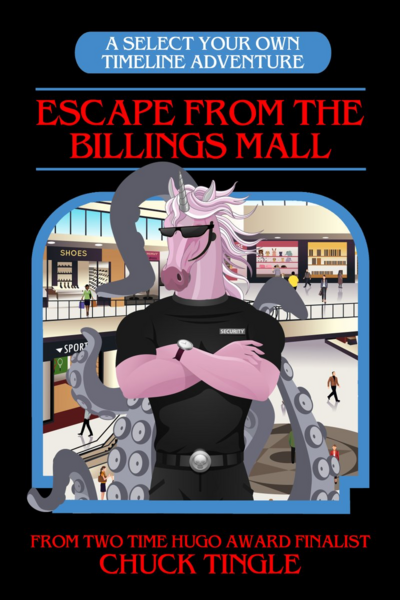 Spoofing the Choose Your Own Adventure series in both trade dress and execution, it has essentially no pornographic content and instead presents a comparatively wholesome scenario with a horrific twist. It’s the day before your son’s birthday and you’re running a little late, but you just have time to swing by the shopping mall in your home town of Billings, Montana to buy him something. However, all is not well, for a timeline rift by the local lake has caused an outpouring of the dark forces of the Void. Besieged in the mall by Void Crabs, hunted within by a handsome unicorn security guard who has been warped into a hideous Void monster, can you navigate the mall, avoid perils like your Reverse Twin, and escape to safety?

The Choose Your Own Adventure gamebook format is interesting to contrast with material like Fighting Fantasy because it’s entirely deterministic – you have no random factors and no game mechanics beyond “choose which page to turn to next” and “keep notes of stuff when you are told to do so”. This sacrifices surprise in favour of reliability; whereas in Fighting Fantasy it’s wholly possible to do everything “right” but still lose because you got unlucky on your rolls, Choose Your Own Adventure books (or Select Your Own Timeline books or anything else using a similar approach) will always yield the same outcome from the same choices.

This brings with it a particular set of design considerations. Whilst you can make the book more difficult by including more decisions, it’s kind of bad form to throw in arbitrary pick-wrong-and-you’re-done choices into gamebooks in general without at least giving you an opportunity to discover the necessary information (though it’s fair enough for locating that information to require you to make different choices earlier on – that can aid replayability). In addition, whereas Fighting Fantasy gamebooks had one true good ending and a range of bad ones, I remember Choose Your Own Adventure books as being more willing to have multiple potential good endings, so replayability becomes a matter of finding the ending you are most satisfied with.

Tingle handles this pretty well. The structure of the adventure is such that it’s easy enough to remember which choices you took and which were blocked off to you so you can try different possibilities, and the various endings available are pretty diverse. The main variables are whether you managed to get away with a present for your son, which present it was if so, and whether you escape the mall by being airlifted by the wizards of the Anti-Void Task Force or find a way to help them clear the mall of Void-taint and deploy it yourself to help them.

This might be a one-off from Chuck, but I do hope it isn’t – he clearly has a good grasp of the format, and it’d be interesting to see what experiments he could manage with it.

One thought on “Choose Your Own Pounding In the Butt”