With its core rulebook and its monster guide having been a success, Chuck Tingle’s Tingleverse RPG has kept up a steady pace of releases. The latest releases continue in the well-worn path of other RPG supplement lines: more PC options, and more campaign setting information. 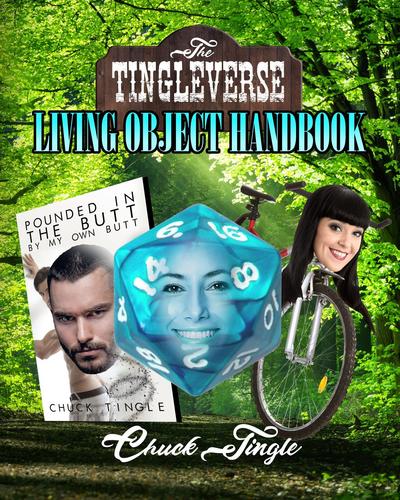 Chuck had hinted back then that this gap would be addressed in some form of supplement, and the Living Object Handbook is the fulfillment of that promise. As well as adding a significant number of more adversarial living objects to use as monsters, it increases the range of character types in the game by providing some seventeen varieties of living objects to play, each of which have some associated stat adjustment and Unique Ways available to them. (If you want to get really meta, you could play The Physical Manifestation of This Game – no, not the Tingleverse RPG in general, the specific campaign you are playing right now.)

The main task before Chuck seems to have been to limit the options here to stuff which is broadly of human size (or can plausibly be scaled up to human size in the case of stuff like Sentient Dice or Living Donuts), and thinking through how to make sure living objects can do the same sorts of things more humanoid characters can do and be subject to the same limitations. This boils down to assuming that all living objects which otherwise don’t have arms have invisible “arms” that let them manually handle stuff, and any which float around to get about have limitations on that floating and exert pressure on the space under them as though they had invisible legs.

As he explains in the opening preamble, putting living objects on a roughly human (or, at most, Bigfoot) scale like this is necessary to avoid the headaches which arise from an adventuring group where one participant is either too tiny to accomplish much or too big to come along into the dangerous dungeons beneath Billings, Montana. This means that the book’s actually doing much better at this sort of thing than 2E AD&D‘s Complete Book of Humanoids did when it attempted a similar massive expansion of playable character races.

As with previous books in the game line (and the Void campaign setting), this has a fairly basic presentation – limited illustrations, one-column this-was-written-in-Word-and-printed-directly layout, and it shows obvious signs of having not had a massively extensive proofreading process. There’s at least one point in the text where Chuck calls this the Living Object Handsome, though I choose to believe that’s deliberate, or at least a Freudian slip that Chuck decided to leave in. 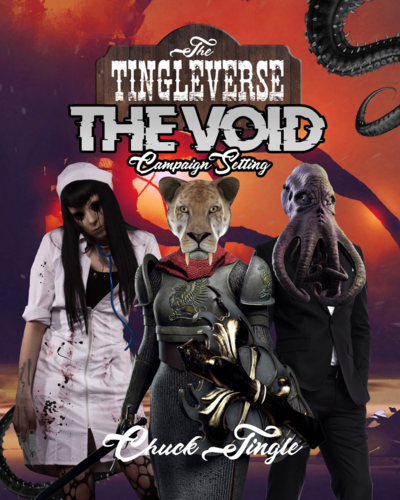 Another recurring theme in Chuck’s fiction is the horror of the Void – the terrible space that exists outside the multiplicity of timelines. If “love is real” is the central axion of the Tingleverse cosmos, the ultimate idea underlying all reality, then by definition the Void is a place without love, for it is a place of things which are not real, but can take on a certain impression of reality when we bestow that on it. (This is close to real world occult ideas about the qlippoth.)

Though Chuck is very clear that there’s no “wrong” way to portray the Void, the concept is still a weighty one, and it makes for both a good source of adversaries and, at higher character levels, an interesting place for parties to visit. The Void Campaign Setting offers details generally expanding on the concept.

There’s a suggested layout of the Void for those who opt to visit, details on Void-inspired curses that devils and scoundrels may inflict on buckaroos out of vindictiveness, new magic items both of a Voidly nature and of a nature to boost a party’s capacity to tackle the Void, discussions of interesting concepts like the idea of timelines which have mostly or entirely succumbed to the Void (a potentially good place to adventure for parties not yet ready for the Void itself), the now-usual brace of additional monsters, and even two new character types with a particular passion for fighting the Void: namely, woolly mammoths and sabertooth tigers (both in humanoid configurations, naturally).

Offering as it does a reasonable discussion of cosmic horror and body horror, as well as a somewhat more serious tone than is usual for The Tingleverse (after all, you’re talking about an otherworldly pseudo-dimension which denies love), The Void could conceivably work pretty well as the underpinnings of a more serious horror game if you wanted – just implement its basic ideas but set aside the Tingle-isms and you’re set.