Nocturnal Media was founded by Stewart Wieck, who’d previously been one of the cofounders of White Wolf until he departed in 2010, a few years after the CCP acquisition and around the time White Wolf’s in-house RPG-writing process was being wound down before eventually being outsourced to Onyx Path. The parting was amicable, so far as anyone knows, and it included the licence for the 5th Edition Pendragon game line, which White Wolf had previously put out under their ArtHaus imprint.

A string of new supplements for the line followed, along with a couple of revisions of the core rules, and then in 2017 came Nocturnal’s most ambitious project yet. The myths of King Arthur and those attached to Charlemagne had always had parallels; before Geoffrey of Monmouth’s History of the Kings of Britain popularised the Arthur legend, the nobility of France, Normandy, and Norman-ruled England looked to Charlemagne as their model of chivalry, and the troubadour poetic tradition which flowered in the 12th to 13th Centuries took inspiration from Arthur and Charlemagne both.

For some time, as a result, fans of Pendragon have considered the game fertile ground for adaptation to the Charlemagne legend, since that tradition and the Arthurian mythos have so much in common thematically. But would Paladin win the same accolades and favours that its Arthurian cousin had earned?

The funding period for Paladin ran from July to August 2017. By the end, some 1516 backers had contributed $82,769 to it. There was a sour note to this: in June 2017, just when he had the campaign ready to launch, Stewart Wieck died. By all accounts, it was astonishingly sudden and unexpected. For the sake of Wieck’s surviving wife and children, Steve Wieck – Stewart’s brother and fellow White Wolf cofounder, and the founder of DriveThruRPG – stepped in to help Nocturnal stalwart Alan Bahr get the project underway anyway, as well as the completion of several other Kickstarters that Nocturnal had going at the time.

What Level I Backed At

PALADIN: You get the massive hardcover Paladin Corebook, the PDF and any unlocked stretch goals in PDF.

The estimated delivery date was April 2018; I actually got my books in July 2019.

Although Stewart Wieck’s death was something of a blow, the delays this time around largely can’t be ascribed to him. PDFs went out in early 2018, but the process of finalising them and printing them was delayed this time by feedback from the backers, who pointed out that some of the artwork in the book seemed kind of… off. Nocturnal agreed and commissioned new art, which would delay the printing process for obvious reasons.

Other delays would likely have been related to the negotiation process which led to Chaosium first stepping in to help Nocturnal complete this Kickstarter and others and then reaching a deal for Chaosium to take back the Pendragon line altogether, a process which was likely complicated by the death of Greg Stafford in between the first and second of those announcements. Once matters were ironed out with Chaosium, the rest seems to have been plain sailing. 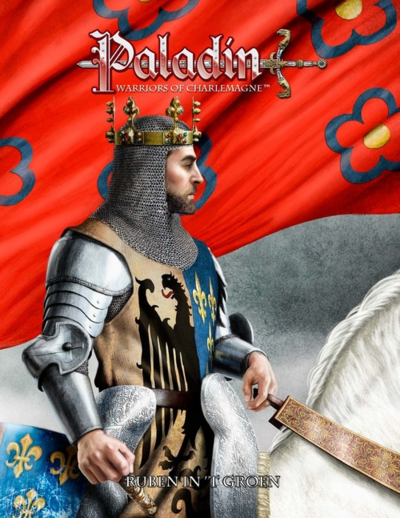 This is more or less exactly what was promised: all that Pendragon goodness you love, reskinned for the Charlemagne stories.

Specifically, it’s got the character generation system – including a system for working out what your daddy and grandpappy did back in the reigns of Charlemagne’s predecessors – and the rules we’re more or less familiar with, plus a description of Frankish society, plus the details on the progress of society and the year-by-year progress of events over Charlemagne’s reign much along the lines of the details provided for the Arthurian saga in The Great Pendragon Campaign.

They’re able to cram all of this into this single thick book largely because Paladin aims to cover a somewhat shorter period of time than The Great Pendragon Campaign did; the latter takes in Uther Pendragon’s reign, Arthur’s conception and birth, his rise to power as the Boy King, his long reign and his death at a ripe old age facing down Mordred – a span of about 80 years or so. On the other hand, by default Paladin begins just before Charlemagne takes the throne of France and ends after his death, which takes in a span of time of less than 50 years. That is still long enough that the generational model of play in Pendragon is still relevant, but also short enough that the year-by-year breakdown of events can fit in this core book.

By and large, the Charlemagne stories are similar enough in their attitudes to the Arthurian legends that using the Pendragon system works out fine with minimal changes; differences are usually based on significant differences between the two legend-cycles as expressed in the source material. For instance, 5th Edition Pendragon‘s section on female knights offers a discussion on how the Arthurian corpus doesn’t really include any, but of course your table can if you wish, so here’s a discussion of how you might do it and what role models women taking up the knight’s role might look up to – cool, fair enough, that’s perfectly reasonable and a big step above some earlier editions of the game refusing to contemplate it. In Paladin, however, women being knights is a thing that can happen by default – and backed up by quotes from the original source material depicting women taking up arms and armour to defend what’s theirs against the Saracen.

On the whole, Paladin feels close enough to Pendragon that if you like one you’ll probably dig the other, but the extensive research done in the various Charlemagne sources to bring the setting to life is impressive and it’s certainly worth picking this up rather than just running a Charlemagne-based campaign from base Pendragon and a copy of Orlando Furioso or something. 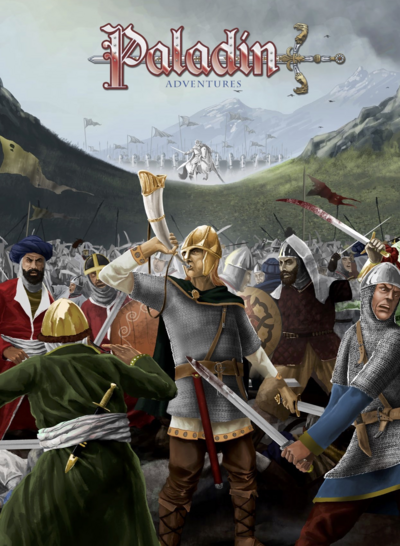 This is an collection of reasonably developed adventures for Paladin, scattered thinly over the game timeline and largely aiming to provide major adventures to coincide with major events of the saga – like the battle of Roncevaux, or the end of Charlemagne’s reign itself.

The adventures, as are the base rules, are extremely true to the original stories in terms of setting details and incidents – the PCs’ actions are where deviations come in. This means that some of the adventures are absolutely trippin’-balls bizarre, and also means that the Christian-centric focus of the Charlemagne legends can become an issue.

You see, whereas Arthurian source material is diverse enough to allow for Pendragon to take a somewhat syncretic approach to religion, with both pagan and Christian interpretations of Arthurian figures being valid – and not necessarily enemies with each other at that, with Christian knights also looking to Merlin or the Ladies of the Lake for advice as the King himself does.

This is a major point of contrast with the Charlemagne stories – wherein the greatest battle of the saga is not an internal conflict which turns the members of Arthur’s court against each other, but is a grand battle against invading Saracens, who (Islam not having been well-understood in Western Europe when the stories were devised) are generally depicted as pagans, and pagans are depicted as inferior. The game therefore directly goes along with this, as do the adventures; in the wake of the Battle of Roncevaux, PCs are expected to attempt to convert their prisoners to Christianity or murder them.

It perhaps isn’t much consolation there that it’s a bloody weird version of Christianity involved too. The game acknowledges that it’s a convention of the source material that Charlemagne is God’s representative on Earth, and that God helps only those knights who are doing their best to support Charlemagne. Sure, the Church is important, but any particular member of the clergy – even the Pope – is in the right only to the extent that they recognise the authority God has invested in Charlemagne. (Recall that when the chanson de gestes were originally composed, strife between the Holy Roman Emperor and the Pope was a regular event, with both of them contending to be seen as the leader of Catholic Christendom.)

The materials also have some utterly bizarre conceptions of what things are like in far-off lands like Persia or Cathay, but these seem much less immediately problematic – I think largely because they’re so weird and wacky, and so disconnected to modern-day notions of race (recall that “black” and “white” as categories of ethnicity wouldn’t be cooked up for centuries) and modern-day national stereotypes as to seem less like racist myths and more like Pythonesque nonsequiturs.

Conversely, the Christianity-vs.-“Saracens” angle cuts so closely to modern conflicts as to feel incredibly uncomfortable, and yet In ‘t Groen makes more or less no particular effort to address this, simply replicating the prejudices of the original material wholly uncritically. Again, I am tempted to compare this to Stafford’s work in Pendragon on the subject of female knights – in which he acknowledges that women don’t get much opportunity at all to adventure in the source material, but also acknowledges that that won’t be to the tastes of every gaming table and offers suggestions on how to steer the game in a purist or a revisionist direction as you please.

Admittedly, In ‘t Groen was in a damned if he did, damned if he didn’t situation there: glossing over this aspect of the original source material for the sake of presenting a more palatable interpretation of it would arguably have been both dishonest, and let the original material off the hook. Perhaps the best thing to do is to accept that Paladin, as written, is an exercise in immersing oneself in an archaic, extinct literary form and the tropes and assumptions which came with it, and that doing so is not only entertaining but also offers a chance for personal enrichment and education through learning about the history in question and gaining an appreciation of how the people who devised these stories have values distinctly different from ours, which you’re not endorsing simply by exploring them in this context.

If that sounds like a bunch of hooey to you – if you would prefer to tell a story at your gaming table which conforms and reinforces your personal values and/or criticises the outmoded attitudes of the past – that’s 100% legit… but you’ll need to do slightly more legwork with Paladin than you do with Pendragon, in my estimation.

Perhaps, at the end of the day, that’s why the Arthurian myths have become as widely-known and embraced as they are: the Arthurian myth-cycle is simply a broader church and bigger tent than the Charlemagne myths, and as such have a greater flexibility in interpretation and lend themselves more easily to a range of different takes. And of course, as radical new intepretations of Arthurian myth proliferate, it becomes all the more easier to see how you can do it, whereas the same process hasn’t happened with Charlemagne. As a result, many gamers might the Charlemagne legend simply less interesting than the Matter of Britain. I am glad that Paladin exists and Paladin Adventures will be useful, but I would be more likely to use it for short-term games than longer campaigns, whereas I can (and have) see myself running Pendragon for an extended campaign.

I suspect any future Pendragon-related Kickstarters will be handled by Chaosium rather than Nocturnal, so my hunch is yes, I probably would back such a thing.